Football
News
The striker's sensational form should be rewarded with a run up top in the national side
Elliott Bretland
14:00, 08 Oct 2020

When James Rodriguez hit a rocket for Colombia against Uruguay at the 2014 World Cup to become a global superstar, Dominic Calvert-Lewin was still six months away from joining Stalybridge Celtic on loan. Six years on, James is his supplier-in-chief at Everton and Harry Kane’s spot as England’s target man is in his sights.

Playing men’s football in the Conference North taught Calvert-Lewin to be physical and brave, and his hard work and commitment has paid off. His two hat-tricks and nine goals in six games so far this season have fired the Toffees to the top of the Premier League and, finding the net so regularly, he’s also caught the attention of Three Lions boss Gareth Southgate, who called him up for the triple-header that starts on Thursday night against Wales.

Having started his career with hometown club Sheffield United, it was the spell at Stalybridge, and later Northampton Town in League Two, which introduced him to the rough and tumble of football.

“I’ve still got the scar from the first 20 minutes of playing for Stalybridge,” he said this week. “I played the game with one eye because the other one closed up.”

It’s been a remarkable rise for the Toffees forward, and his form is so impressive that Southgate has a decision to make on starting him ahead of Kane. 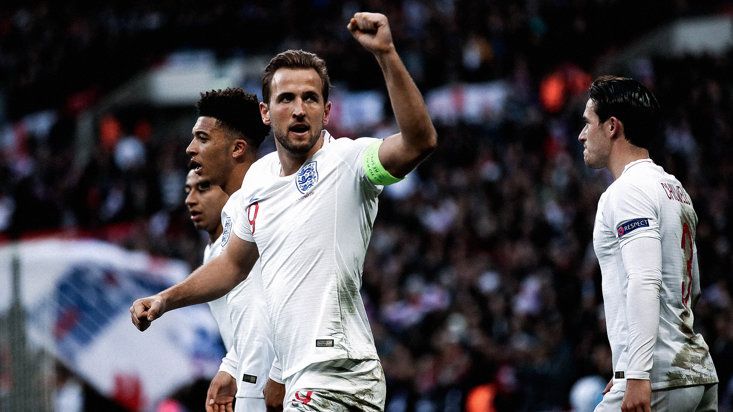 The Tottenham talisman is this generation’s Alan Shearer, the second-quickest man to net 100 Premier League goals. However, as his game has developed, he’s dropped deep to influence play more, and perhaps isn’t the out-and-out striker England require this month. Calvert-Lewin is that man.

Running the channels, front-facing and lethal in the air, the Everton attacker would help provide a more fluid system for England’s attack-minded forwards who can buzz behind him and create.

Calvert-Lewin has learned the game and is ready. Sure, Kane has three goals and six assists himself this term, having most recently torn Manchester United apart last weekend, but Calvert-Lewin’s animalistic performances and more natural fit with the front role cannot be ignored.

Go back a year, to when he was playing under Marco Silva, and even the Goodison Park fanbase were split. Some felt he held the ball well and worked hard, but he would never be a ‘20-goal-a-season’ striker. Others saw a young Graeme Sharp - a man who fired Everton to European glory in the Eighties. Those with the latter view have been grinning knowingly all season; ‘DCL’ has become a hungry, monstrous goal-machine under Carlo Ancelotti.

Arriving at Everton during Ronald Koeman’s first summer, he’s since worked under five more managers, including club legend Duncan Ferguson. It was perhaps the Scot’s influence during his spell as caretaker, in which Calvert-Lewin bagged a brace against Chelsea, which really pushed him on. Working closely with Big Dunc on the training field and wearing his iconic number nine, the striker has already scored a plethora of headers Ferguson, famed for his aerial prowess, would be proud of.

“He told me to back myself more and believe in my stature and back my strength,” he said. “It’s a confidence thing – once you realise you can do it once, you start to do it more consistently and then it becomes part of your game, which I think is what’s happened.”

Now 23, Calvert-Lewin has come of age. Adored this season, he’s always been a likable character and drew more plaudits on his arrival at the England camp. Articulate and quietly determined, he reportedly turned up wearing his grandfather’s cap and removed it to speak to his new England manager. A polite, courteous goalgetter, he is.

The time is now ripe for Southgate to give Kane a new assignment and hand England’s hottest striker the number nine shirt he deserves.