“I looked at that game thinking about Liverpool on Sunday, maybe it's the wrong thing to do, because I thought in that that first half United were all over the place. They were disjointed, the two midfield players played on their own. If you do that against Manchester City or Liverpool, at half-time it will be three or four-nil.”

At a time when there is discontent within English football over the lack of critical analysis of the job Ole Gunnar Solskjaer is doing at Manchester United, Paul Scholes used his BT Sport platform after their lucky escape against Atalanta on Wednesday night to underline just how much they need to change about the way they are playing right now.

Other United sympathisers within the media have picked at certain players but largely steered clear of criticising the manager or his tactics, with Gary Neville going so far on Sky Sports’ Monday Night Football as to state he will never suggest that Solskjaer should be fired.

“I’ve got Manchester United fans on my social media timeline saying ‘Gary, he’s your mate, you won’t call him out.’ No, I won’t. I wouldn’t call Steve Kean [at Blackburn Rovers] out, or Arsene Wenger at Arsenal, I’m not going to come on this show 11 years later and ask for a manager to be sacked, it’s never going to happen.

“He’s a club legend, he’s my teammate, I actually like him a lot, and Manchester United failed with two previous managers who had been world-class.” 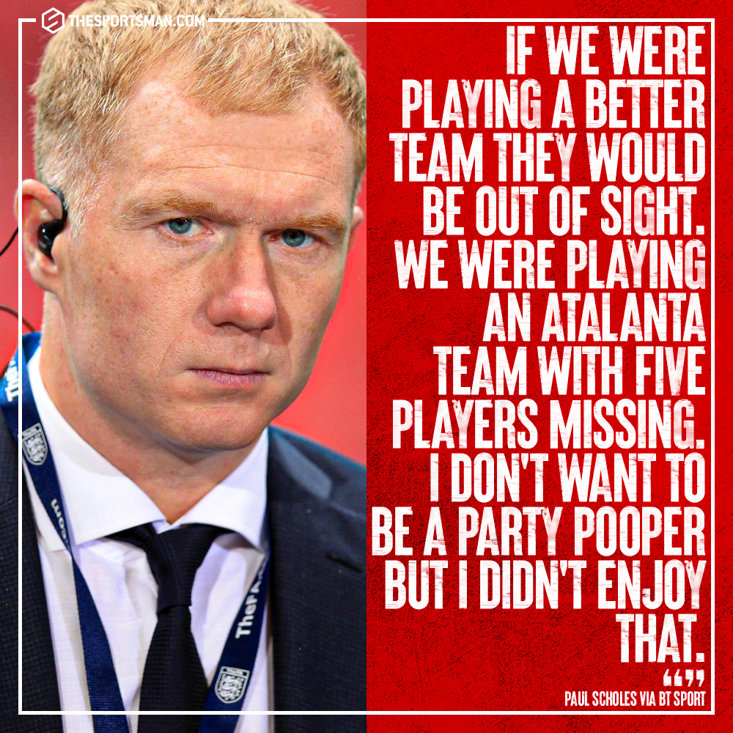 But Scholes’ critique of United’s kamikaze approach to the 3-2 comeback win in the Champions League on Wednesday was the biggest challenge yet from any of the Norwegian’s former United teammates.

To be fair, Solskjaer’s decision to go with a 4-2-4 formation which exposed his two holding midfielders Fred and Scott McTominay – the very players whose contribution to the cause is questioned most on a game-by-game basis – left Scholes with an open goal. When 2-0 down at half-time, following on from the 4-2 loss at Leicester City on Saturday, the United boss’ future looked to be edging towards untenable. The eventual victory won them three points, but it wasn’t enough to temper the concerns the former United midfielder had burning inside him.

“They do rely on the big players to get them wins in games, and a lot of big clubs do, but the balance of the team you can see is not right,” he added. “My worry is when we play a top-class team we’re going to struggle.

So far Solskjaer has continued to do just enough to satisfy the minimum criteria each season as United manager. After a boom and bust opening few months in the job, he used the summer of 2019 to bring a British heart back to the club, reaching the Champions League the following season. Last term they finished second in the Premier League and reached their first final under the former striker in the Europa League.

Some believe another top-four finish and a trophy of some description would be enough to prolong his stay, but others’ minds are made up. They can simply not envisage Solskjaer ever leading United to a Premier League or Champions League title, making him the wrong person for the role. But Scholes’ review of Wednesday night’s performance is the closest any ex-United player has come to saying Ole is the problem.

Does the manager need to find a way to correct the imbalance in his side? Undoubtedly. Does he have to come up with a formation which does more to harness the quality of his better players? Definitely. Will he be given the time to address the concerns? Almost certainly.

But in the meantime he might well find that the support he has within the media will be frayed with every poor performance, however much the likes of Scholes, Neville and Rio Ferdinand will never launch themselves two-footed into the #OleOut camp which has taken root across social media.