It’s been another belting day at the World Cup and by tomorrow, we will have seen all 32 teams in action for the first time. Here’s all the latest news from the 2022 World Cup.

We had a major World Cup shock this week when Saudi Arabia beat Argentina - but Japan followed suit by coming from one goal down to beat Germany 1-0. It was a shock of epic proportions but one that was fully deserved after an impressive second half performance.

It’s a result that leaves Germany on the brink, as they face Spain on Sunday knowing that a defeat could spell the end of the road. Two group stage exits in two consecutive World Cups for the Germans is unthinkable… isn’t it?

Germany cover mouths ahead of kick-off

Ahead of that shock result, Germany’s players made their own stand after FIFA refused their request to wear the ‘One Love’ armband. "It was a sign, a message that we wanted to send out. We wanted to convey the message that Fifa is silencing us," said head coach Hansi Flick.

"Of course, it's important for us to make a statement like this," Kai Havertz added. "I think we spoke about the game, what we can do.I think it was the right thing to do, to show the people that we tried to help wherever we can and Fifa makes it not easy for us."

“The team’s okay but there’s no goals in it,” ITV pundit Gary Neville said before Spain faced Costa Rica. 90 minutes and seven goals later, Luis Enrique’s men may have proved the former Manchester United man wrong. The 7-0 thumping of a woeful Costa Rica side was their biggest ever World Cup win and with Germany to come on Sunday, they look like a side ready to take this tournament by storm.

Star man Gavi also made a bit of history with his excellent volley as he became the youngest World Cup goalscorer since Pele in 1958. 18 years and 110 days old. 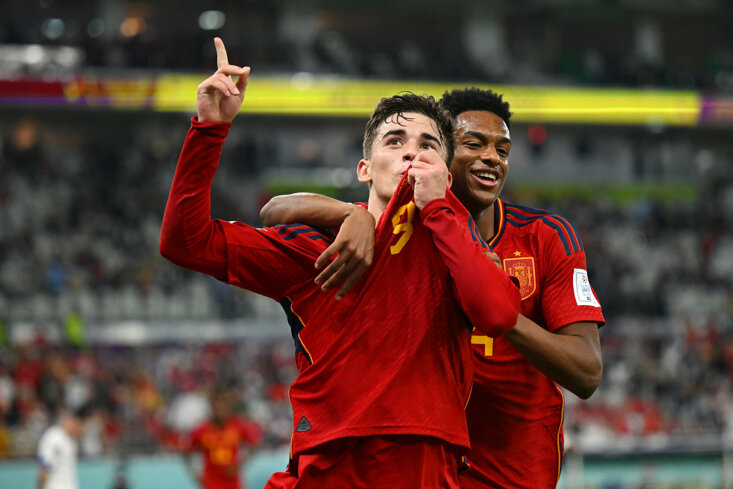 Gavi scored a cracker for Spain

Belgium looked like an ageing side against Canada in their World Cup opener, as Alphonso Davies and co. ran them ragged. Yet for all of the huffing and puffing, and despite having more shots than Spain in their 7-0 win, John Herdman saw his side fall to a 1-0 defeat. It was a painful lesson, but the Canadians are sure to entertain us for the rest of the group stage - at least.

Herdman told his team after the game "We belong here and we are going to 'F' Croatia. It's as simple as it gets."

England captain Harry Kane had a scan on his ankle which had the whole nation holding its breath, but it seems to be an overreaction. Jordan Pickford confirmed that Kane trained with the team today, although James Maddison was absent again.

"I think he is good," said Pickford, ahead of the USA match on Friday. "I'm sure he is fine. He was out on the grass with us today which is good. He is our captain."

There’s a lot of excitement building about World Cup favourites Brazil and tomorrow, after five days, they finally begin their tournament against Serbia. Neymar, Vinicius Jr, Raphinha and Richarlison are all set to start as Tite lets his talented attackers run riot, while Serbia manager Dragan Stojkovic had a laugh in his press conference when hearing that news:

“Did you say that FOUR strikers will play tomorrow? It's over for us...it's finished!"

Betfred World Cup Odds*
x
Suggested Searches:
The Sportsman
Manchester United
Liverpool
Manchester City
Premier League
More
football
World Cup Daily: Tears for Suarez, Joy For South Korea And Last...
The final 32-team World Cup group stage has come to a thrilling close and with the knockout stage starting [ ... ]
football
Cameroon Stun Brazil With Late Winner As Dani Alves Makes History
Cameroon scored an injury-time winner to shock tournament favourites Brazil and secure a famous 1-0 [ ... ]
football
Switzerland Find Their Rhythm In Attack As They Reach The Last...
Switzerland certainly silenced their critics as they came out on top in a five-goal thriller with Serbia [ ... ]
football
Fifa World Cup: South Korea Keep Dream Alive With Late Win Over...
South Korea’s World Cup dream will continue after they sensationally came from a goal behind to [ ... ]
football
Penalty Pain Again For Ghana But Suarez And Uruguay Head Home...
Another Ghana v Uruguay fixture at the World Cup, another penalty nightmare for the Black Stars. And [ ... ]
football
The Spoiled Kid At Christmas: Jumped-Up Cristiano Ronaldo Is...
With the air conditioning at full blast and no beer it is hard to believe that Christmas is round [ ... ]
football
An International Power Shift? It Will Take Much More Than A...
Saudi Arabia stunned Argentina. Japan have beaten both Germany and Spain from losing positions. Australia [ ... ]
football
Out Of The Shadow: Portugal's Bruno Fernandes Doesn't Need Cristiano...
How would you feel, if you were Bruno Fernandes? You score at the World Cup and your illustrious teammate, [ ... ]
football
Group G And H Permutations: What Do Uruguay Need To Qualify...
Last night saw the biggest drama of the 2022 World Cup so far with Belgium and Germany being dumped [ ... ]
football
World Cup Blog: The Final Day Of The FIFA World Cup Group Stage...
Welcome to The Sportsman's LIVE World Cup Blog. Stay tuned for all the action to come from matchday [ ... ]
football
Fifa World Cup Today: Ghana Out For Revenge Against 2010 Conquerors...
So we have made it to the final day of group games at the World Cup. There’s four games to look [ ... ]
football
World Cup Daily: Germany Dumped Out, Martinez Sacked And Japan...
The best day of the group stages so far? Yeah, well, since last night for sure. A stonking night of [ ... ]
football
Just Another Shock: Japan Complete Epic Turnaround To Beat Spain...
In the space of six second half minutes, Japan launched and completed an epic World Cup turnaround [ ... ]
football
Double Disaster: Germany Knocked Out Early Again, Now Hansi...
Germany are a disaster. Yes, that Germany. The four-time world champions have, for the second time in [ ... ]
football
Roberto Martinez Sacked By Belgium: A Lack Of Smarts Led To...
Belgium’s 2022 World Cup group stage exit was only ever going to be followed by one thing. Roberto [ ... ]
football
Romelu Lukaku Left To Rue Missed Chances As Belgium Go Out Against...
Belgium are out of the 2022 World Cup. They missed countless chances in the second half of their 0-0 [ ... ]
football
Surprise Package Morocco Are Not To Be Underestimated As They...
No one would have predicted this heading into the World Cup but Morocco have qualified for the knockout [ ... ]
football
England's Great Revivalist: Why Marcus Rashford Deserves Your...
Every time the England teamsheet is published, the public are quick to tell you exactly what they think. [ ... ]
football
Old Guard Or New Era? Firepower Needed For Germany's Crucial...
Two games into this World Cup, Germany sit bottom of their group, on just one point. They have to win [ ... ]
football
World Cup LIVE: Groups E And F Come To A Close
Welcome to The Sportsman's LIVE World Cup Blog. Stay tuned for all the action to come from matchday [ ... ]
football
Group E And F Permutations: Germany And Belgium Fighting To...
It seems crazy to think, but the likes of Kevin De Bruyne, Eden Hazard, Manuel Neuer and Jamal Musiala [ ... ]
football
Fifa World Cup Today: Spain And Germany Hoping To Progress To...
The penultimate day of Fifa World Cup group stage action is here and it is all to play for in Groups [ ... ]
football
World Cup Daily: Ben White Leaves England Camp While VAR Messes...
The World Cup has lost four more teams and we now know who is heading home and who is heading out from [ ... ]
football
No Game Five, Not Even A Game Four: Mexico Dumped Out In Brutal...
Despite a 2-1 win over Saudi Arabia, Mexico are out at the group stage having been within one goal, [ ... ]
football
World Cup 2022: Messi And Argentina Keep It Tidy With 2-0 Win...
Argentina’s World Cup dream continues. Lionel Messi’s World Cup dream continues. After some [ ... ]
football
Didier Deschamps Gains Valuable Lesson Of France's Squad Depth...
France have a great chance to retain the World Cup title but their squad depth is not quite as it appears [ ... ]
football
Dreadful Denmark Deservedly Picked Off By Superb Socceroos
Less than 18 months ago Denmark were a dodgy penalty decision away from forcing a shoot-out in a European [ ... ]
football
England v Senegal: The Three Lions' Indifferent World Cup Record...
England might be preparing for their first-ever meeting with Senegal in Al Khor on Sunday but they have [ ... ]
football
Group C And D Permutations: Argentina Could Be Knocked Out Of...
Netherlands, Senegal, England and USA are all safely into the last 16 of the 2022 World Cup, [ ... ]
football
World Cup LIVE: Argentina Take On Poland For Last 16, Australia...