Football
News
After 19 years, the Roman Abramovich era is coming to an end at Stamford Bridge
Andrew Dillon
12:35, 04 Mar 2022

Vladimir Putin has achieved regime change - but not quite the one he is expecting.

Like most of the Russian tyrant’s objectives in Ukraine, things are not turning out as he would like.

Whether sports teams win or lose is irrelevant right now.

Chelsea’s Ukrainian former striker Andriy Shevchenko made that point crystal clear in a TV interview this week describing the terror being experienced by his family in Kiev.

Yet sport often reflects politics and acts as a barometer for public opinion. As such, Roman Abramovich’s decision to dump his beloved Chelsea is a move that will shake the football world and beyond.

He has been a benefactor prepared to shatter spending records and swallow record losses. An elusive character likened to a James Bond villain with a vast fortune and one hand on the trigger ready to shoot the next hapless manager.

Rival fans mercilessly taunt Chelsea supporters about their club’s shadowy owner. That without Abramovich they will be screwed.

It’s a theory about to be put to the test in the most spectacular manner.

Abramovich insists he won’t hurry the sale of his pet treasure but it might not be up to him.

With the UK Government threatening sanctions on the Russian oligarchs whose money is no longer welcome in ‘Londongrad’, time is not on his side.

Why would he be ready to write off the £1.5 billion in loans he is owed by the club if it isn’t to grab a quick sale?

It’s the kind of financial carrot that will have anyone with a spare £3 billion in the bank reaching for PayPal.

That’s how much it is roughly going to cost to take over a club that faces a wholesale change of direction virtually overnight.

Abramovich bought the right to hire and fire his coaches on a whim through his wallet. He was happy to write off huge sums to get to where he wanted on the pitch. 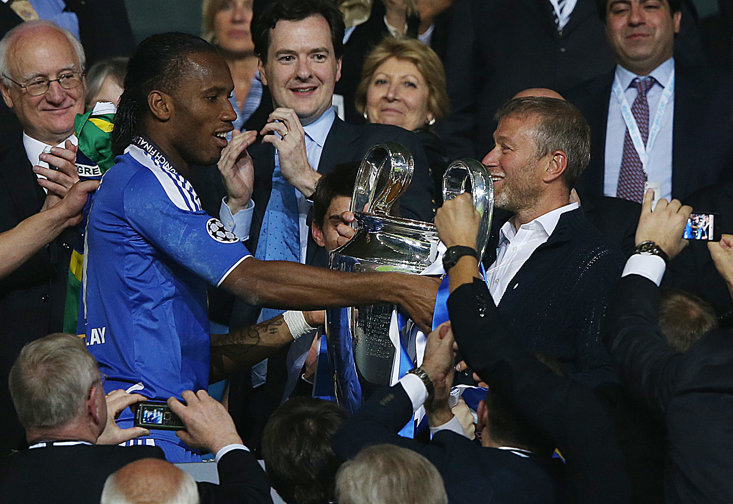 The irony should not be lost that only last month Chelsea acquired the one trophy which has eluded them - the Club World Cup.

It means they really have ‘won it all’ under the man who at 36, was only four years older than current captain Cesar Azpilicueta, when he bought the club for £140m.

That turbulent, volatile, successful, unrivalled era is now coming to a close and most people will say good job too.

But while the next owners of Chelsea may be more palatable to our politicians, it might not be quite such a comfy ride inside Stamford Bridge.

With a £3 billion price tag, only those with the hardest noses for business will be making offers.

Abramovich insists ownership of Chelsea was never about money. That became painfully clear when he gladly handed over £50 million for Fernando Torres in a move that was a disaster. And there have been others.

Shevchenko himself, most likely now an ex-friend of Abramovich, was reported to have been bought on the owner’s personal wishes against those of then boss Jose Mourinho.

Michy Batshuayi, Adrian Mutu, Juan Sebastian Veron. It’s a lengthy list of flops but Abramovich kept signing the cheques from on board his £500m yacht.

Let’s not forget all those hefty payoffs for the ten permanent full-time managers Abramovich has sacked as well.

Nineteen major trophies in as many years comes at a high price. But when a football club is your toy you can do that.

It’s not the case anywhere else in English football. Even Manchester City have their limits, proven when they baulked at £160m for Harry Kane last summer.

Expect a much higher degree of financial accountability at Chelsea from now on which might be reflected in their presence in the transfer market and ultimately the Premier League table.

Just last August, Abramovich sanctioned a record-breaking £97million to sign striker Romelu Lukaku, whose most impressive acts of late have been scoring against a Championship and League One side in the FA Cup.

When the new owners thumb through the books it might not make quite as exciting reading as the recent trophy list.

Anyone with an ounce of humanity is praying for a swift end to the conflict. The repercussions for Chelsea could be long-lasting, but pale in comparison to the plight faced by Ukraine.