By Monday morning, Lionel Messi’s quest for an international trophy may have finally come to an end. His Argentina side face Brazil in the wee hours of Sunday morning and will compete in their fifth final since 2004 - yet every single one of those finals has ended in despair. Here’s a round-up of that miserable run of Copa America final defeats.

The old enemy broke Argentinian hearts from the penalty shootout back in 2004, a feeling that La Albiceleste would grow used to. Their last Copa America title came back in 1993 so we are now at 28 years of hurt for one of the powerhouses of world football, who have also failed to win a World Cup during that time span.

This final was in their hands, as Cesar Delgado gave them a 2-1 lead in the 87th minute, but they were pegged back in added time by a special strike from Adriano which ultimately took the game to penalties. A talented team that featured Javier Zanetti, Javier Mascherano and Carlos Tevez came up short from the spot against the reigning world champions, but they would make the final again in the very next edition.

Three years later (don’t get us started on the Copa America scheduling), the two strongest South American sides in the noughties met once again, this time in Venezuela. This was Messi’s first final but it did not end how he had hoped as Brazil dismantled Alfio Basile’s side after an early goal from Julio Baptista.

A young Messi couldn’t impact the match as Juan Roman Riquelme and Juan Sebastian Verson were the star names of this Argentina side which on paper looked stronger than a Brazil team in transition. An own goal from captain Roberto Ayala and a Dani Alves strike put the final beyond doubt as Brazil won their eighth title. 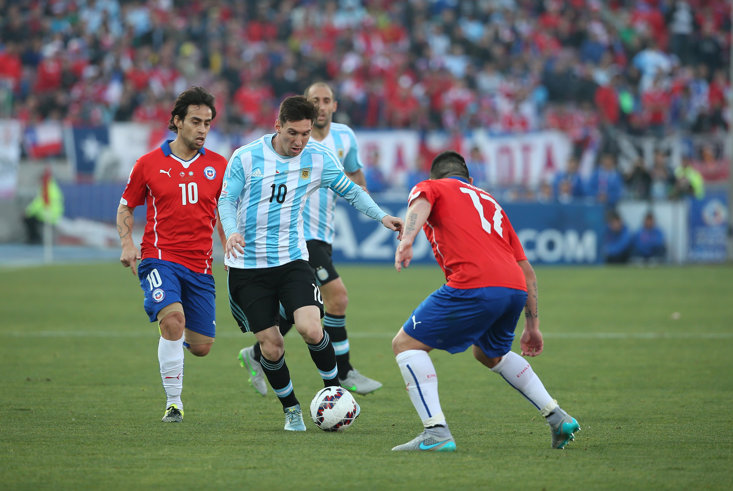 The chance that will forever be remembered is Gonzalo Higuain’s miss in the last kick of normal time. In front of a baying Chilean crowd Messi weaved away from a defender and charged towards the box. He laid the ball to his left to Ezequil Lavezzi who squared it to Higuain, but from a tight angle he failed to convert. It was oh so close.

Penalty torture would haunt them once again as only Messi himself converted before Higuain and Ever Banega missed to hand the trophy to Chile in front of their own fans. The Barcelona man couldn’t hide his emotion as tears fell from his face at full-time, but twelve months later, they’d be in yet another final.

A packed out Metlife stadium saw 82,000 hoping to witness history, but once again it was heartbreak after another goalless encounter, in which Argentina played all of the second half with ten men after Marcos Rojo was sent off. The centenary edition of the competition was held in the US and Argentina looked to have the advantage on penalties as Arturo Vidal missed first for the holders.

Then up stepped Messi. Looking as composed as always, he stood up and blazed the ball over the bar. We guess that is what pressure can do to even the best in the world. Chile didn’t miss another spot kick as Lucas Biglia missed the deciding penalty, but Messi’s miss will haunt him to this day.

On Sunday he has another chance. His fourth Copa America final and the first on Brazilian turf. How fitting it would be for him and his country to end this dismal run at the home of their fiercest rivals?