Boxing
News
Ahead of this weekend's showdown between Artur Beterbiev and Anthony Yarde, we look at the biggest light-heavyweight punchers ever
Kieran Spratt
11:00, 25 Jan 2023

Boxing fans will be treated to one of the hardest-hitting match-ups of the year this weekend when unified light-heavyweight world champion Artur Beterbiev travels to London to defend his IBF, WBC and WBO titles against Anthony Yarde.

Beterbiev currently holds an eye-watering knockout rate of 100% while Yarde’s 88% is impressive in its own right. To build up to this heavy-handed showdown, we look back at the light-heavyweight division’s biggest ever punchers.

Arguably the greatest light-heavyweight of all time, Ezzard Charles defeated a plethora of hall of fame fighters across three divisions in a career that would eventually see him win the world heavyweight title. ‘The Cincinnati Cobra’ showed plenty of venom by stopping 52 men between 1949 and 1952, the most notable of which was against fellow hard-hitting great Archie Moore in 1948.

The only man to go 15 rounds with the great Jack Dempsey, alongside a granite chin, Tommy Gibbons could absolutely bang. The American recorded 48 knockouts from 62 wins and beat some memorable names in one of boxing’s first genuine golden eras.

Adonis Stevenson is one of the biggest punchers in recent memory. ‘Superman’ displayed fistic power that would make Clark Kent blush, vanquishing 24 opponents early from 29 wins. The highlight was a one-punch KO of WBC champion Chad Dawson in 2013, one of the most jaw-dropping conclusions to a 175lb title fight in the sport’s history. 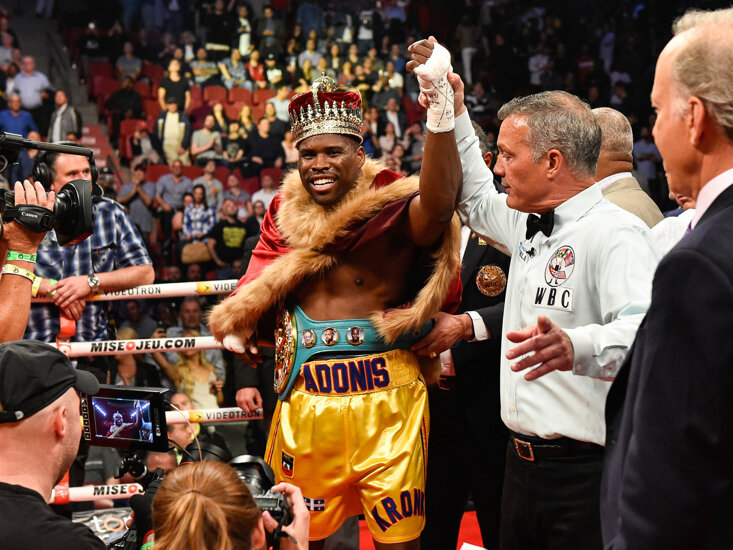 Over 70% of three-time light-heavyweight champion Marvin Johnson’s opponents failed to hear the final bell. The 1972 Olympic bronze medallist’s most eye-catching KO win came in 1978 against Victor Galindez with a 'over-the-top-from-underneath' left that flattened the Argentine and saw ‘Pops’ claim the WBA title.

A true warrior, Matthew Saad Muhammad had both the heart and aggression of an untamed lion inside the ring. Competing in a golden era for the light-heavyweight division, ‘Miracle Matthew’ saw 29 of his 39 wins end inside the distance. His record included stoppage wins over fellow champions John Conteh, Richie Kates, the aforementioned Marvin Johnson twice and Yaqui Lopez.

Erroneously remembered for his 91 second destruction at the hands of Mike Tyson, Michael Spinks is unquestionably one of the best light-heavyweights in the sweet science’s long and storied history. Spinks and his trademark ‘Spinks Jinx’ right hand reigned supreme in the same golden era as Matthew Saad Muhammad, where he remained undefeated and knocked out a string of former champions and top contenders.

The fearsome Sergey Kovalev certainly lived up to his ‘Krusher’ moniker. 29 of the Russian wrecking ball’s 35 wins came inside the distance, 22 inside the first three rounds. The former world champion remains active, last fighting at cruiserweight in May, and while he’s well beyond his prime now, he showed in 2019 that he still holds some devastating power in his sledgehammer fists by stopping Anthony Yarde with a straight left jab. 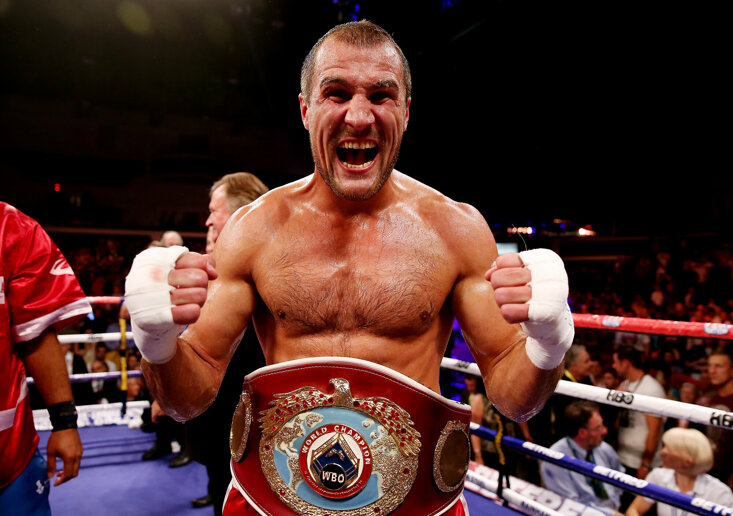 Unified WBC, IBF and WBO champion Artur Beterbiev has yet to go the distance since turning professional in 2013, stopping all 18 of his opponents en route to becoming arguably the best fighter at 175 lbs on the planet. This weekend he takes on the similarly hard-hitting Anthony Yarde; if he wins that, which he should, only WBA champion Dmitry Bivol will be standing in his way on the path to undisputed. If he continues his trend of knockouts against these two, the Canada-based Russian could move up this list.

A frequent campaigner at heavyweight, Bob Foster was unfortunate enough to have fought in a golden era for the division, losing to the likes of Muhammad Ali, Joe Frazier, Ernie Terrell, Doug Jones and Zora Folley. At light-heavyweight however, he was a different beast entirely.

One of the pound-for-pound biggest punchers ever, Foster’s crowning moment in the ring was a superb fourth round KO of the great Dick Tiger to win the world title. Of his 56 wins, 46 were left out of the hands of the judges. He was ranked 17th in The Ring magazine’s 100 greatest punchers of all time.

With a career that began in 1935 and ended in 1963, there aren’t many fighters who can claim to have spent as long in the ring as the ‘Old Mongoose’ Archie Moore. One of the most criminally underrated pugilists to ever lace up a pair of gloves, it took Moore 20 years to get a title shot and once he’d won it, he held onto it for a decade. He remains the division’s longest reigning champion.

He finished his career, which included spells at middleweight and heavyweight, with a whopping 131 knockouts, the most of any fighter in the modern era.

x
Suggested Searches:
The Sportsman
Manchester United
Liverpool
Manchester City
Premier League
More
boxing
Don't Wait Until Retirement To Appreciate The Hall of Fame-Bound...
Too often in life, we leave it too late to appreciate what we have. Sport is one of the guiltiest avenues [ ... ]
boxing
Boxing's First Tag Team Match And The Weirdest Combat Sports...
Combat sports is in a weird place. The most famous fighter on the planet is a YouTuber who has never [ ... ]
boxing
Anthony Yarde's Defeat To Artur Beterbiev Did More Good Than...
If a fight looks like Mission Impossible and sounds like Mission Impossible, sometimes it simply is [ ... ]
boxing
Caleb Plant Vs David Benavidez: Five Boxing Stories You Might...
With the afterglow of one big British card behind us in Liam Smith vs Chris Eubank Jr and the anticipation [ ... ]
boxing
Why Brave Anthony Yarde Is The Cure For The Common Boxer
In a world with four recognised sanctioning bodies, several unrecognised sanctioning bodies and a litany [ ... ]
boxing
Announcement Imminent: Anthony Joshua Vs Jermaine Franklin At...
Two-time unified heavyweight champion Anthony Joshua is reportedly set to fight Jermaine Franklin at [ ... ]
boxing
Floyd Mayweather Vs Aaron Chalmers: Everything We Know So Far
Floyd Mayweather will return to the ring next month to take on former Geordie Shore star Aaron Chalmers [ ... ]
boxing
Boxing's Doomed Superfight: The Long Road To Josh Taylor Vs...
One of the most hotly anticipated fights in British boxing has been delayed yet again. WBO super lightweight [ ... ]
boxing
See You At The Crossroads: What Next For Chris Eubank Jr And...
Liam Smith vs Chris Eubank Jr had all the hallmarks of a crossroads fight. While they are only a year [ ... ]
boxing
Artur Beterbiev Vs Anthony Yarde: Everything You Need To Know...
Boxing fans will be treated to one of the hardest-hitting match-ups of the year this weekend when unified [ ... ]
boxing
Mersey Beat: Liam 'Beefy' Smith Stuns Chris Eubank Jr With Fourth...
Liam Smith stunned Chris Eubank Jr at the Manchester Arena, stopping the pre-fight favourite in four [ ... ]
boxing
Poles Apart: Richard Riakporhe Stops Two-Time World Champion...
Richard Riakporhe scored the biggest win of his career so far, steamrollering former two-time world [ ... ]
boxing
Leave The Memories Alone: Kell Brook Shouldn't Return To Face...
Boxxer CEO Ben Shalom says former IBF welterweight champion Kell Brook is “desperate” to [ ... ]
boxing
Citizen Of The World Alex Dilmaghani Focused On Global Domination
“Why don’t they play football? This is a sport where you get hit and hurt. The way some [ ... ]
boxing
The Day Ali Talked A Suicidal Man Down Off The Ledge Of A Beverly...
Wilshire Boulevard in Los Angeles cuts right through the heart of Beverly Hills. One particularly famous [ ... ]
boxing
Lucrative February Showdown Between Jake Paul And Tommy Fury...
Could it be third time lucky for a blockbuster showdown between Jake Paul and Tommy Fury? Well, according [ ... ]
boxing
''I Shook Up The World!'': The Moment Cassius Clay Truly Became...
On what would have been his 81st birthday, it is only appropriate to pay tribute to the cultural [ ... ]
boxing
Chris Eubank Jr Vs Liam Smith: Everything You Need To Know
Chris Eubank Jr and Liam Smith kick off the New Year in style this weekend when they descend on the [ ... ]
boxing
How To Watch KSI Vs FaZe Temperrr: Undercard, Time, Venue And...
The show must go on. After Dillon Danis’ withdrawal, KSI will now fight gaming YouTuber FaZe Temperrr. [ ... ]
boxing
Australian Heavyweight “One Of The Frontrunners” To Fight Anthony...
Two-time heavyweight world champion Anthony Joshua is expected to return to the ring in April looking [ ... ]
boxing
KSI Vs FaZe Temper: Everything You Need To Know
KSI returns to the boxing ring this weekend as the latest Misfits card hits Wembley Arena. The YouTuber-turned-boxer [ ... ]
boxing
All Aboard: Get On The Jesse 'Bam' Rodriguez Hype Train Before...
You can count on one hand the boxers who had a better 2022 than Jesse ‘Bam’ Rodriguez. The [ ... ]
boxing
Women's Boxing Picks Up Where It Left Off In 2022 With A Huge...
If you thought women’s boxing was leaving its big, history-making nights in 2022 then think again. [ ... ]
boxing
Triple Threat: Eddie Hearn's Three-Fight Plan To Revive Anthony...
Matchroom Sport chairman Eddie Hearn has mapped out Anthony Joshua’s road to heavyweight redemption. [ ... ]
boxing
Manny Pacquiao Signs For Rizin, But Are Exhibitions Damaging...
Manny Pacquiao has announced he will return to the ring for Japanese MMA company Rizin Fighting Federation [ ... ]
boxing
Look Out Spence And Crawford: Could 2023 Be The Year Of Jaron...
Jaron Ennis returns to the ring on Saturday 7th January, ready to kick off what could be the defining [ ... ]
boxing
The Panel: Should Boxing Have One World Champion Per Division?
Welcome to The Panel, where we speak to a group of star names from across the fight game about the big [ ... ]
boxing
Auld Lang Syne Of The Times: Boxing's 2023 New Year's Resolutions
With Christmas out of the way, as we emerge from our turkey-comas and blink into the light of 2023, [ ... ]
boxing
From ‘Bam’ To ‘Big Baby’ - Five Boxers to Keep An Eye On In...
Another year in the ring is about to come to a close. We’ve already run through our favourite [ ... ]
boxing
Why Natasha Jonas Is The Sportsman's Women's Boxer Of The Year
2022 was truly the year of women’s boxing. Katie Taylor and Amanda Serrano headlined Madison Square [ ... ]