Former two-weight world champion Carl Frampton knows a thing or two about preparing for massive fights. ‘The Jackal’ will be covering Saul ‘Canelo’ Alvarez’s undisputed super middleweight clash with Caleb Plant this weekend, and is ideally placed to take fans inside the minds of the two combatants. The Sportsman caught up with Frampton to talk in depth about this historic fight, the tactical battles ahead, and how ‘Canelo’ would have fared against some super-middleweight greats.

The Sportsman: Things got heated between the pair at a press conference a few weeks back. Do you think the scuffle will play on Canelo’s mind, or will we see the same calm, considered Alvarez we’re used to?

Frampton: “I think people are looking into that a bit too much. When the first bell goes he’ll be clinical, he’ll be relaxed, he’ll be patient. He always likes to figure people out. He has a look at them and he looks for patterns. Complacency, as always, is key.

I don't feel like just because he doesn't really like Caleb Plant, he’s suddenly going to go gung-ho and walk into silly shots. That's just not him. I don't think he liked Billy Joe Saunders much either and his approach to that fight was really concise. He never got agitated, never looked like he was frustrated or anything like that. So I don't think (the scuffle) is going to affect him at all.”

You spoke about patterns there. What do you think Canelo has spotted in Caleb Plant’s style that he can exploit?

“I don't think he's the biggest puncher in the world so I think he’ll be looking to drag him into a fight. Plant is really really fluid, and he moves well. Something that he does do is punch with people and kind of punch at the same time as them. I wouldn't say he gets sloppy but a bit brave.

I think it's really interesting that he's brought in Virgil Hunter and Andre Ward to help give a bit of advice because I think they will be drilling into him not to do that and not to engage. To be constantly moving, not to stand still, not to be on the ropes. These are things that he's done previously but I just don’t think he can do them against Canelo.

Canelo will be hoping to drag him into a fight at some point and if that does happen, that definitely suits him. There's loads of different ways that he can beat him. He's one of the best counter-punchers in boxing at the minute. Defensively he's one of the best as well. Just really well-rounded. Plant will give him issues, Plant is a very good fighter. I feel like we’re all talking too much about Canelo, Plant is still a very good fighter. But it’s hard for me to see a way Plant beats him.” 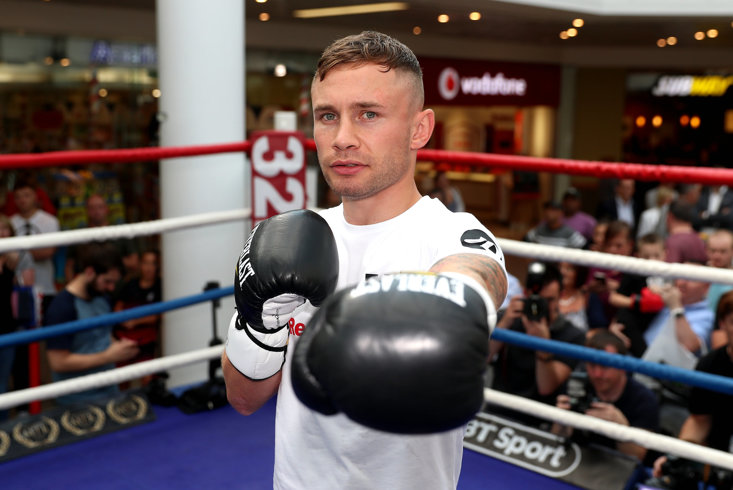 Where would you rank Plant amongst the fighters Canelo has faced in unifying the super middleweight crown?

“Billy Joe [Saunders] was a middleweight coming up, but still an established fighter. A very, very good fighter. I thought going into the Callum Smith fight that Smith, Plant and (David) Benavidez would give Canelo issues. I was surprised at how easy he dealt with Callum Smith to be honest.

George was out of shape at that point in time, we had just started training camp. But I remember being really impressed with him. He’d only had a handful of fights at the time. So this kid can fight, it can really fade and I think it's as good as any of his wins at super middleweight.”

In the UK and Ireland, super middleweight has historically been one of the banner divisions. How do you think Alvarez would have fared in the era of Joe Calzaghe, Chris Eubank, Nigel Benn and Steve Collins?

“I think Calzaghe is probably the only one that gives him issues. You've got Benn, Eubank and Collins; all incredible fighters. But you're talking about a different bracket here when you're talking about Canelo. He’s just a special fighter. I don't think he would have had an issue with any of them three.

But Joe was a different story. One of the best, if not the best ever, to come from the UK. So I think Calzaghe could give him problems. But Canelo probably still wins that fight.”

Alvarez is almost universally agreed upon as the best fighter in the world. Does Canelo have a natural successor as pound-for-pound king?

“I really like Teofimo Lopez. I like Josh Taylor and I like (Jaron) ‘Boots’ Ennis as well, a very good fighter. But they're not going to have the career that Canelo has had and the amount of fights he's had.

No one's really going to match that I don't think, for generations to come. He's taken it upon himself to fight regularly. It's going to be hard for someone like Josh Taylor, for example. He’s had what, 16 fights? Something like that [Taylor is 18-0], and has unified the division. But he's not going to have sixty-plus fights like Canelo. He just doesn't have that amount of time to do it. How busy he’s been has been incredible and hopefully other fighters will take note.”