For anyone wanting a glimpse of the future in men’s tennis, they would be well advised to check in on the match between Carlos Alcaraz of Spain, and Italy’s Jannik Sinner on Sunday at Wimbledon.

With Alcaraz still only 19 and Sinner just a year older, the pair look set to be sharing out the titles for years to come. They arrived at Wimbledon with remarkably similar records and career paths – five titles apiece on tour, a best performance at a slam to date of reaching the quarter-finals… and for both being in the fourth round is their best showing in this tournament.

Those barriers will be pushed soon enough, and quite possibly this year at Wimbledon for whoever prevails in what looks the clear tie of the last 16 in the men’s singles. Though grass may not prove ultimately the preferred surface for players raised on the clay, both have already demonstrated the natural skills, quick learning and movement to produce winning and high-class tennis on the surface.

If Rafa managed it, then so can these two. The hype around Alcaraz, ranked No7 in the world and seeded five at Wimbledon, has been the greater with many observers including John McEnroe believing he is a future world No1 and multiple grand slam winner.

The Spaniard is already a bull of an athlete, combining a devastating forehand with a heavy serve, lightning speed around the court and making regular use of the drop shot to great effect. And his progress into the top 10 in the world has been as smooth as it was expected. You might almost say effortless…but nothing of that magnitude comes without a huge amount of work.

Alcaraz, who destroyed Germany’s Oscar Otte in the third round giving up just six games, said: “I played unbelievable against Oscar. It was my best performance so far. I'm really happy with the level, and I will try to keep this level into the next round.

“Obviously Jannik is a good player, he plays unbelievable. He has a great level here on grass. I mean, he has won really good matches here, so it's going to be a really tough round. But I'm going to enjoy it. Playing against Jannik is always tough but I like to play these kind of matches, these kind of challenges. 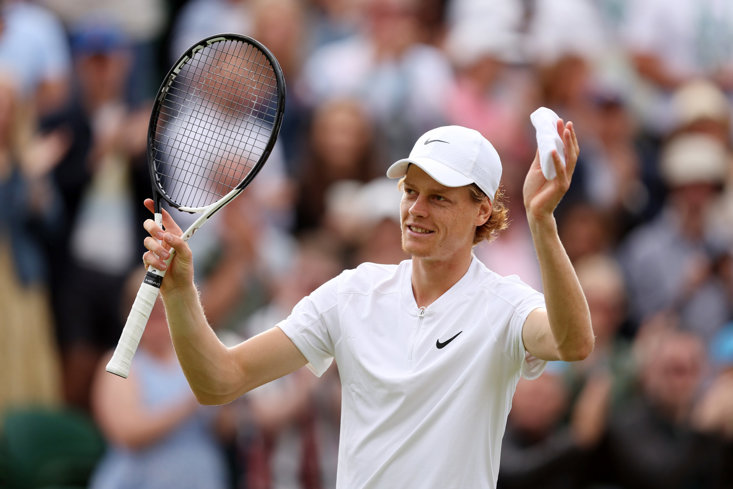 “Right now I would say Jannik and I are the youngest players left in the draw, I think so. Well, maybe we are the most talented younger players, but obviously there are a lot of young players as well that they play unbelievable.

“Outside the court I have a good relationship with Jannik. I mean, I talk to him. When I see him in the locker room, off the court, I make some jokes. Inside the court I know him a little bit. I play him in Paris last year, and we trained a couple of times.

“On Monday was my first match on grass. It was really tough as Struff play unbelievable. But in four, five days the training, the matches, you learn how to play more on grass, how to move more on grass. You have to play aggressive and get to the net, and you can’t let your opponent dominate.”

Alcaraz won their only main tour clash 7-6, 7-5 at the Masters event in 2021, But after seeing how John Isner blew Andy Murray away with his service bombs, the ease with which Sinner – another learning very quickly on the grass - took him apart in straight sets in the third round was extremely impressive, even given the fitness issues the American seemed to be struggling with.

Sinner, who was born and raised in the northern mountain Tyrol region of Italy, grew up ranking tennis third on his sporting agenda behind skiing and football. But having decided that he had more chance of directly influencing the outcome was far higher on a tennis court, he soon devoted all his energies in that direction.

He said: “I hope I can be part of this, for sure – a great rivalry. But everyone has his own way and I still have to work a lot. So let's see what the future gives me and Carlos. I mean, we are both young. We are both great tennis players and good people. Yeah, hopefully this can be the case.”

And the prize for the winner is a huge one - a near-certain quarter-final showdown with six-time Wimbledon champion and red-hot title favourite Novak Djokovic on Centre Court.