Boxing
News
Why is this weekend's catchweight clash at risk and what are the effects of the drug?
Joey Mills
15:05, 05 Oct 2022

Conor Benn’s O2 Arena superfight with Chris Eubank Jr has been thrown into disarray after a banned substance was found during pre-fight drug testing. The British Boxing Board of Control released a statement saying the bout is “prohibited” from taking place “as it is not in the interests of boxing”.

Eddie Hearn responded during a Matchroom Boxing live stream saying work is underway to get the fight staged. The promoter said "It's with the lawyers going backwards and forwards now...ultimately conversations have to be had with the lawyers, the teams and the BBBoC".

The drug in question is clomifene, which was found to be present in the A-Sample Benn submitted to the Voluntary Anti-Doping Association. Benn’s B-Sample has not yet been tested, but Matchroom have said that the fighter has undertaken a doping control test with UK Anti-Doping. They report there was no banned substances found in this sample.

The drug is used to increase fertility in women, but it has been found to have effects on males too. The medication increases testosterone levels which would have performance-enhancing capabilities in a professional athlete. In a 2003 study for the International Journal of Impotence Research, it was found that “significant increases” in testosterone were reported in all patients taking the drug as part of the study.

BrandeisMD, an online “Male Rejuvenation Center” lists the drug as one that can “usually achieve a 100% increase in T levels. In some cases, one may see up to a 200% increase”.

The public workouts are still taking place as planned while Matchroom remain locked in talks with the BBBoC as this article is being published. 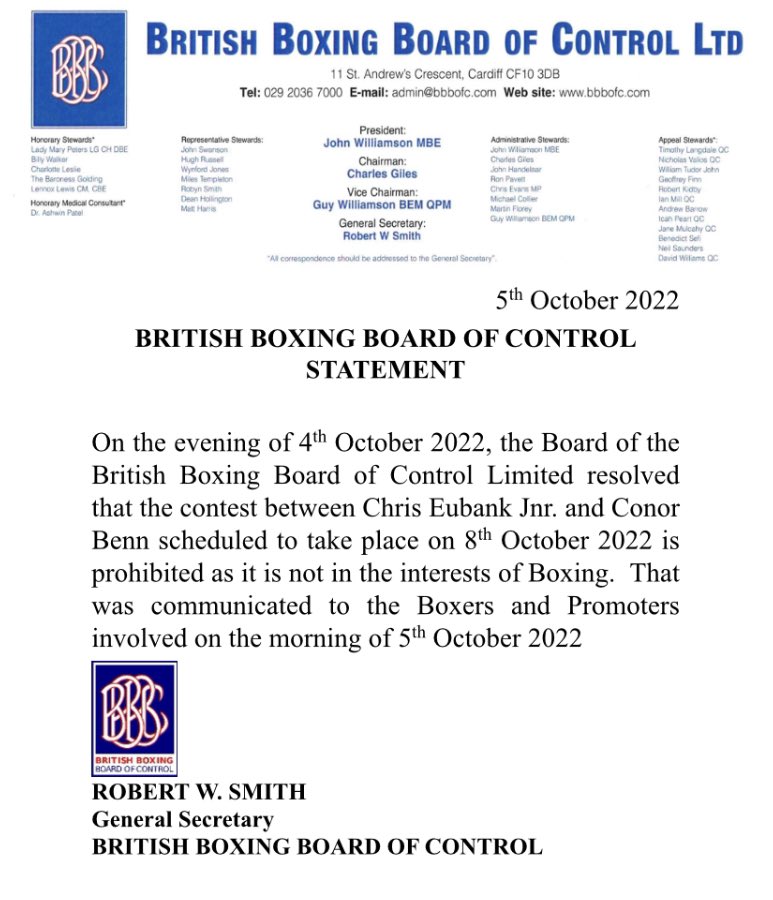 132
435
x
Suggested Searches:
The Sportsman
Manchester United
Liverpool
Manchester City
Premier League
More
boxing
Oleksandr Usyk Enters Ring After Tyson Fury Batters Derek Chisora
Tyson Fury retained his WBC heavyweight title with a controlled and dominating display over fellow [ ... ]
boxing
Fit For A Gypsy King: The Greatest Performances Of Tyson Fury
Look alive you big dossers, 'The Gypsy King' is back. Tyson Fury defends his WBC championship [ ... ]
boxing
Del Boy's Half-Dozen: The Greatest Victories Of Derek Chisora
Despite being perhaps the most entertaining British heavyweight of this generation, Derek Chisora’s [ ... ]
boxing
Oleksandr Usyk Promoter Targeting Undisputed Clash With Tyson...
An undisputed heavyweight title fight between Tyson Fury and Oleksandr Usyk could happen in early [ ... ]
boxing
Tyson Fury On Retirement: I’m Not Built For A Normal Life
Tyson Fury returns to the ring this weekend when he puts his WBC heavyweight world title on the line [ ... ]
boxing
Mike Tyson, Floyd Patterson And Boxing's Youngest Heavyweight...
On this day in 1956, Floyd Patterson stopped the great Archie Moore in five rounds to become the heavyweight [ ... ]
boxing
Everything You Need To Know About Estrada Vs 'Chocolatito' III
Not all trilogies are created equal. But a rivalry poised at one win apiece, with each previous meeting [ ... ]
boxing
On This Day In 2015: Tyson Fury Ends The Wladimir Klitschko...
Tyson Fury walks into Tottenham Hotspur Stadium this Saturday as a proven commodity. As he makes his [ ... ]
boxing
What Does Dillian Whyte Have Left? Controversial Win Leaves...
Whatever you thought of the decision, something wasn’t quite right about Dillian Whyte’s [ ... ]
boxing
Tyson Fury vs Derek Chisora III: Everything You Need To Know...
Tyson Fury puts his WBC heavyweight title on the line this weekend when he meets Derek Chisora in the [ ... ]
boxing
Gorman Vs Wardley Is A Throwback Fight Worthy Of The British...
On Saturday night, Fabio Wardley and Nathan Gorman will honour one of the great British boxing traditions. [ ... ]
boxing
Five Blows From The Body Snatcher: Dillian Whyte's Greatest...
Dillian Whyte will be looking to bounce back to winning ways this weekend when he takes on undefeated [ ... ]
boxing
Carl Froch Vs George Groves And Boxing's Great British Grudge...
Nine years ago today, Carl Froch and George Groves collided at the Manchester Arena, waging the first [ ... ]
boxing
Dalton Smith: 'Get A Couple Of Million And I'll Smack A YouTuber!'
Dalton Smith is a star on the rise. The Sheffield super lightweight has just made the first defence [ ... ]
boxing
Zach Parker Vs John Ryder: Everything You Need To Know
The WBO interim super-middleweight title is on the line at the O2 Arena this weekend in a fascinating [ ... ]
boxing
Dillian Whyte Vs Jermaine Franklin: Everything You Need To Know...
Heavyweight contender Dillian Whyte will be looking to bounce back to winning ways this weekend when [ ... ]
boxing
Gervonta 'Tank' Davis And Ryan Garcia Agree To Mouthwatering...
WBA ‘regular’ lightweight champion Gervonta Davis has agreed a fight with unbeaten contender [ ... ]
boxing
The Weekend Boxing Preview: European Titles, Unbeaten Superstars...
After a star-studded weekend where old stagers Ricky Hatton and Floyd Mayweather took part in exhibitions, [ ... ]
boxing
Martin Scorsese At 80: Celebrating Raging Bull, The Iconic 'Anti-Rocky'
“And though I'm no Olivier, if he fought Sugar Ray he would say that the thing ain't the [ ... ]
boxing
Why Dmitry Bivol Should Make 'Canelo' Come Back To 175 Pounds...
Saul ‘Canelo’ Alvarez has targeted a May return to the ring, after having surgery on his [ ... ]
boxing
Fury-Wilder 4 And Usyk-Hrgovic: The Heavyweight Fights Nobody...
Ask any boxing fan which heavyweight fight they would cherish above all others and you’d get the [ ... ]
boxing
The Panel: Should Women's Boxing Move To Three-Minute Rounds?
Welcome to The Panel, where we speak to a group of star names from across the fight game about the big [ ... ]
boxing
A Tale Of Two Exhibitions: Ricky Hatton And Floyd Mayweather...
On 8th December 2007, Floyd Mayweather defeated Ricky Hatton in Las Vegas, with the WBC and The Ring [ ... ]
boxing
Tommy Fury vs Paul Bamba Cancelled: Is Fury Unprofessional,...
Tommy Fury’s stock has never been lower. This weekend, when due to fight Paul Bamba, he weighed [ ... ]
boxing
Redemption Day: Natasha Jonas Clinches The Treble Against Marie-Eve...
A year ago, Natasha Jonas’ two most recent fights were a pair of failed attempts to win world [ ... ]
boxing
Chasing Gold: Conner Tudsbury Determined To Become A Mancunian...
There was something of a media circus the day Moss Side Fire Station Boxing Club opened its doors in [ ... ]
boxing
Haney-Lomachenko, Stevenson-Cruz And More Ordered At WBC Convention
The World Boxing Council hosted their 60th annual convention, in which they laid out plans and policy [ ... ]
boxing
'You Want Homer To Fight Tatum?!': 26 Years Of 'The Homer They...
It was a heavyweight title fight like no other. Watched by 9.7 million viewers on its initial airing [ ... ]
boxing
Back From The Brink: Natasha Jonas Has Gone From Nearly Girl...
A year ago, Natasha Jonas had failed to win her last two bouts. The decorated amateur had seemed nailed [ ... ]
boxing
This Is Hitman Heritage: The Very Best Of Ricky 'The Hitman'...
Ricky Hatton returns to the ring this Saturday in an exhibition bout against legendary three-weight [ ... ]