19 goals in 12 games. Three consecutive home league hat tricks. Banging in two in the first half of a Champions League tie against Copenhagen before going off midway through, you sense just to give the opposition a chance. Manchester City’s Erling Haaland isn’t just a cheat code at this point, he is the game.

The Cityzens are relishing having their first truly world class centre forward since Sergio Aguero. It already feels like Haaland will surpass the career of the iconic Argentine. But unlike Aguero, who netted 260 goals in 390 City appearances, it is hard to shake the feeling the bulk of Haaland’s career achievements will come elsewhere.

It feels early to be speculating on the future of a player who only debuted for the club in August. But these conversations are already coming to the fore. City boss Pep Guardiola had to publicly refute claims this week that Haaland has a release clause in his contract that specifically names Real Madrid as a club he can speak to for a certain fee.

“It’s not true, he has no release clause for Real Madrid or any other team. It’s not true, what can I say?” Guardiola chose his words carefully. While denying the existence of a team-specific release clause, he did not rule out a clause altogether. Many outlets are reporting there is some form of release fee built into Haaland’s deal. No figures have been forthcoming on those claims, but it seems likely to be a lofty sum.

None of this is to say the Norway international will be on the move any time soon. Haaland has settled admirably at the Etihad Stadium and will likely ply his trade in blue for a while yet. But the Premier League no longer feels like a destination for the very best players in the world, rather it is a layover on the way to bigger things.

Not wishing to enter the tiresome “GOAT” debate, The Sportsman shall stick to the facts here. The last time the Ballon d’Or holder played for a Premier League teams was 2008, when Cristiano Ronaldo won the award while at Manchester United. He ranked second in the 2009 award as a Real Madrid player. Every recipient since has played for either Barcelona or Real Madrid apart from one; Lionel Messi at Paris Saint-Germain. 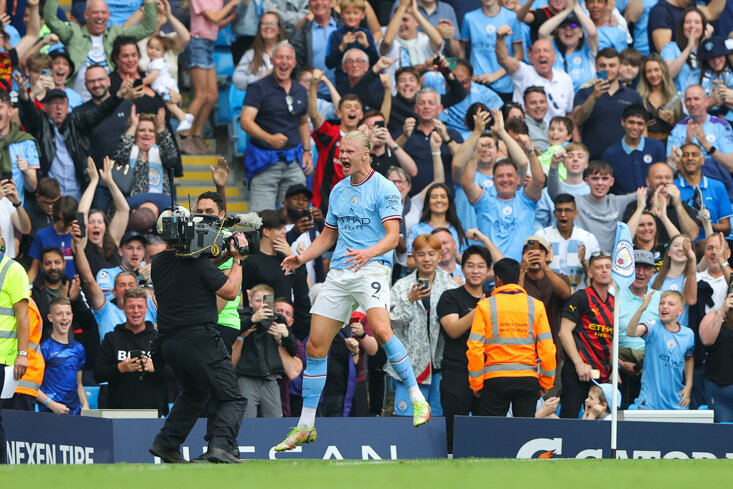 This era of Messi-Ronaldo dominance has coloured the way the new generation sees football. Real Madrid thought they had Kylian Mbappe sewn up this summer specifically because the 23-year-old grew up idolising Los Blancos in his youth. Barcelona were able to attract a raft of top signings in the latest window even with their frankly catastrophic financial situation. The pull of La Liga’s big two has been buoyed immeasurably by today’s player being weaned on the Messi and Ronaldo-led peak of the league.

This has trickled down to the Premier League for a number of years now. Ronaldo, Gareth Bale, Luka Modric, Luis Suarez, Eden Hazard and Pierre-Emerick Aubameyang are just some of the players who have swapped the supposed “best league in the world” for a new life with Spanish giants. It is this steady flow of talent from the pinnacle of English football to Real Madrid and Barcelona that suggests Haaland might not stay long enough to get a statue next to David Silva and Vincent Kompany.

Mbappe is in a similar boat in France. Despite signing a new contract, an unprecedented document that has handed him everything but the keys to the Eiffel Tower, you still feel like he has at least one more move in him. Real certainly will not relent and it is hard to imagine the free-spending Barca turning their noses up at the signing either. If one of these two titans of La Liga lands the Frenchman, you imagine the other will go after a young forward of equivalent talent…

Haaland and Mbappe have long been earmarked as the second coming of Messi and Ronaldo. It seems inconceivable that any two players could reach those levels, as the two rivals bent football to their will for over a decade. But it is fair to say Haaland and Mbappe look the closest to doing so considering their achievements at this relatively early stage of their careers.

City fans certainly do not need to nervously half-celebrate each of the Norwegian’s goals as if it his last. Haaland seems settled and unlikely to agitate for a move. But the magnetic pull of La Liga claims almost every world class Premier League standout in the end. Despite the money and glory on offer at City, it seems highly unlikely Haaland will go his entire career without turning out in El Clasico.