Football
News
The Uruguayan netted late on after having a goal ruled out in the first-half
Elliott Bretland
18:29, 11 Apr 2021

Tottenham versus Manchester United was always going to be a game packed with quality and entertainment. Paul Pogba’s delicious pass for Edinson Cavani to finish should have been the moment in the game we were all discussing and enjoying at half-time. Instead, yet again, it was VAR or rather, refereeing decisions, we were swept up in. Luckily, the Red Devils responded to a call which went against them in the right way to run out 3-1 winners but had they not, this could have been another spectacle spoiled.

The Frenchman and Uruguayan combined exquisitely to stick the ball in the net and then punched the air in unison, delighted at crafting and finishing such a beautiful goal. Pogba rolled the ball with his foot on the edge of the area, waiting for the perfect moment and then it came. As Cavani made a run, he expertly put it through Serge Aurier’s legs for the striker to slot home. It was perfection. But then, it was ruined.

VAR came into play and Chris Kavanagh looked at the monitor. In the build-up United midfielder Scott McTominay shrugged off a challenge from Son Heung-min with his arm, appearing to make contact with the Spurs forward’s head who went to ground. No goal. Every decision is open to interpretation and some will agree it was a foul. For the vast majority though, it was soft and a brilliant strike had been chalked off because of it.

"If this is a foul we should all go home, it's embarrassing,” said United legend and Sky Sports pundit Roy Keane and many will agree with that take. Hours earlier, as Newcastle defeated Burnley, a high foot from James Tarkowski in the area was not deemed a penalty and thus, the inconsistencies are what irk the most.

EDINSON CAVANI WATCHES AS HIS DIVING HEADER FLIES INTO THE NET

Of course, we all know football is the greatest script writer, conjuring more dramatic storylines than Shakespeare and any soap opera producer combined, and it was Son who put Tottenham ahead six minutes later. Having gone down holding his face after his tussle with McTominay, the South Korea international was on hand to tap home Lucas Moura’s cross unmarked at the back post.

Manchester United supporters will have smarted from the perceived injustice of it all. And so too, a fair few football fans. The Red Devils on the pitch, though, used it to spur them on and combined again excellently to equalise and this time, their goal stood. United moved their way towards the Spurs net with a series of intricate one-touch passes before it was worked into Cavani to strike. His effort was pushed away by goalkeeper Hugo Lloris but Fred had continued a rare furore into the box and fired home the rebound to score his first Premier League goal since 2018.

Then came justice. For United and for Cavani. Mason Greenwood crossed with his left from the right-hand side, cutting out Tottenham’s backline and the ball curled perfectly into the path of the frontman who scored expertly with a diving header. Cavani’s movement in the box was sumptuous and the goal, really deserved.

This time, the striker slid on his knees in celebration and roared triumphantly with a nod knowing this time, this was his goal to keep and the winner, too. Late on, Cavani almost put into his own net but his wayward header at the other end struck the woodwork. VAR halted him in the first half before the bar saved him in the second. Greenwood then put the gloss on the victory, scoring in the 96th minute to complete a 3-1 win.

Courtesy of Cavani’s goal and some brilliant build-up play, United came back to triumph against former boss Jose Mourinho in spite of that ruled out strike and we can all enjoy the majesty of that winning goal rather than spending another evening bemoaning the poor use of VAR. 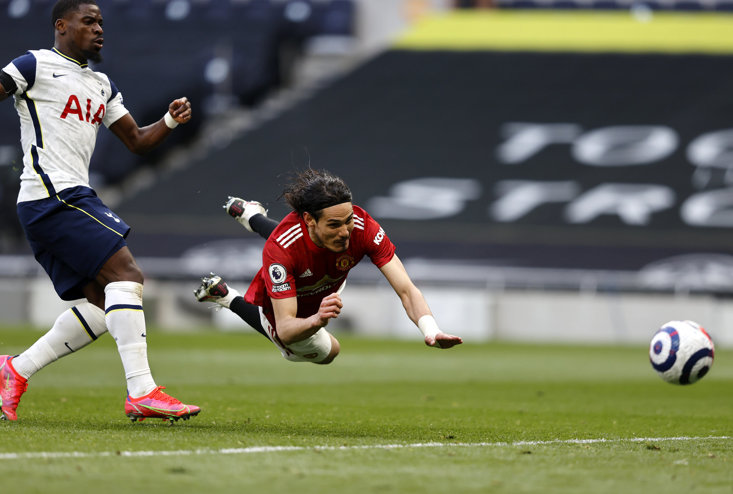 United boss Ole Gunnar Solskjaer told Sky Sports after the game, "I have to say, if my son stays down like this for three minutes and gets 10 of his mates around him… if he gets that in the face from one of his other mates and he needs 10 of his mates to help him up, he won't get any food."

Mourinho then hit back and told reporters, "Let me tell you something. I am very, very surprised that after the comments that Ole made on Sonny, you don't ask me about it. And I told Ole already this, because I met him just a few minutes ago. If it's me, telling that player A B or C from another club, 'If it was my son I wouldn't give him dinner tonight,' or something like that, what would be the reaction?

"It is very, very sad. I think it's really sad that you don't ask me about it. It's really sad that you don't have the moral honesty to treat me the same way you treat others. I just want to say, Sonny is very lucky that his father is a better person than Ole, because I think a father - I am a father - you have to always feed your kids, it doesn't matter what they do. If you have to steal to feed your kids, you steal. I am very, very disappointed, and like we say in Portugal bread is bread and cheese is cheese, I told Ole already what I think about his comments."

The Sportsman
@TheSportsman
FOUL. NO FOUL.