Some of the leading figures in women's football have suggested reducing the size of the goals and pitches to improve the pace and quality of the game. Chelsea manager Emma Hayes raised the idea in 2019, and now England's most capped player Fara Williams has thrown her support behind the idea.

Speaking on the new series of The Players podcast, Williams, who has 172 international appearances said: “I’m not saying we should massively change the size of goals and the pitch, but if it makes the game look faster or more skilful then I'm for that.

“If they were reduced by a small amount I don't see it as a negative, it would make the game look faster. I'm not talking about nine-a-side pitches and it doesn't have to be massively smaller. How many times have we been to a game and said 'How big is the pitch today?'

“You look at Liverpool for example, the men, and Trent Alexander-Arnold and Andy Robertson are pinging it from right to left - if you can name full-backs in our game that are able to do that, it doesn't happen that much.”

Williams was joined by Manchester City’s Lucy Bronze, who won FIFA’s ‘The Best’ award back in December and both players agreed that comparisons to the men’s game are unhelpful for the sport.

“We always get compared to the men,” said Bronze. “People say I’m the best player in the world and they compare me to someone like Kevin de Bruyne, we’re both at Manchester City.

“But he's had that technical and physical coaching from the age of five and I've had it for four or five years, so of course the game will be in different places. It's seen as being a predominantly male sport and that whole sexist thing comes into it and people want to knock women down.” 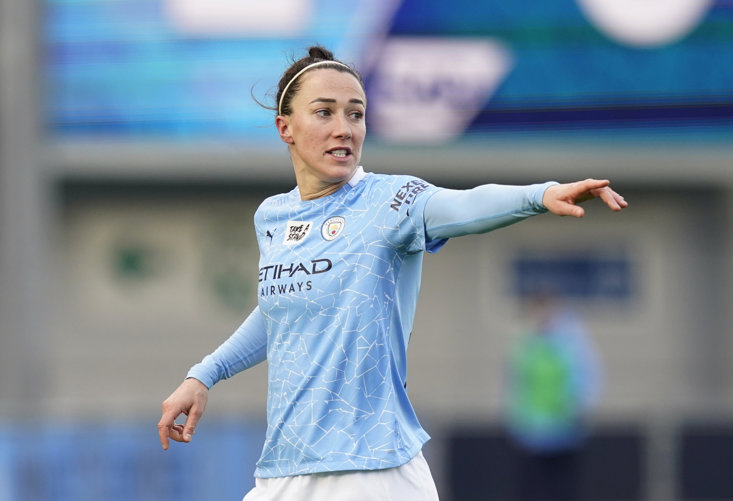 BRONZE WON THE WORLD PLAYER OF THE YEAR AWARD IN 2020

Williams, now 37, has recently been dealing with a kidney condition called nephrotic syndrome and talked on the podcast about how that has affected her over the last year. She added to Bronze’s comments: “If you put someone up against De Bruyne, that's doing an injustice of how good you are as a female footballer. Some of the female players are unbelievable but they're always judged against the men.”

In the week where jockey Rachael Blackmore made history at the Cheltenham Festival, the Lionesses agreed that sexist comparisons were not as prevalent in other sports.

“Athletics is not seen as a boys' or girls' sport, it's equal,” Bronze stated. “Tennis is the same, they get equal pay. In football there's many people that are too precious about not wanting women to play.”

Williams added: “In the media they compare and it's silly. You don't compare a female heavyweight boxer to Anthony Joshua and you don't compare the fastest 100m female sprinter with Usain Bolt, you just credit their quality and athleticism. I don't know why, but female footballers get compared to the men.

“It's our game, we need to stop comparing it to the men's. Until we do that and make the game our own we're always fighting a battle.”