Football
News
Gareth Southgate's side are united in their fight against racism and homophobia
Simon Lillicrap
12:05, 08 Jul 2021

We are bursting with pride. Never in our lifetimes did we think we would see something like this. England are in a tournament final for the first time in 55 years and this nation has rallied around this wonderful team. But what they stand for off the pitch, and the brilliant leader they have in Gareth Southgate, makes this team one to be truly proud of.

They represent all of us, from all walks of life. Raheem Sterling, born in Jamaica, raised in the shadow of Wembley, dreamt of scoring goals for England on the hallowed turf, but he has faced adversity to get this far. Years ago, the press in this country vilified him for his every move based purely on the colour of his skin, until he fought his own corner and turned the tide of negativity against him.

Marcus Rashford is another young man who has not only led the fight against racism but also social injustice. His well-documented work to feed young children on the poverty line forced the government into more than one u-turn, he has repeatedly shown wisdom way beyond his years and his kind social media messages to the likes of recently-vilified tennis teenager Emma Raducanu show just what kind of a man he is.

But the beauty of this team and what they represent is that it isn’t about individuals. Collectively, they have never wavered in their messages and, led by Southgate, they have stuck to their guns at every turn. In Bulgaria, they were hounded by a racist crowd who performed Nazi salutes and monkey chants at England’s black players. This is something no human being should ever be subjected to, yet the players kept their cool.

United, the players decided to keep playing rather than leave the field and they wiped the floor with them, winning the game 6-0. Sterling, who was one of the main targets of the abuse, briefly silenced the crowd by finding the net on two occasions. That racism is the reason the England players continue to take a knee before matches. 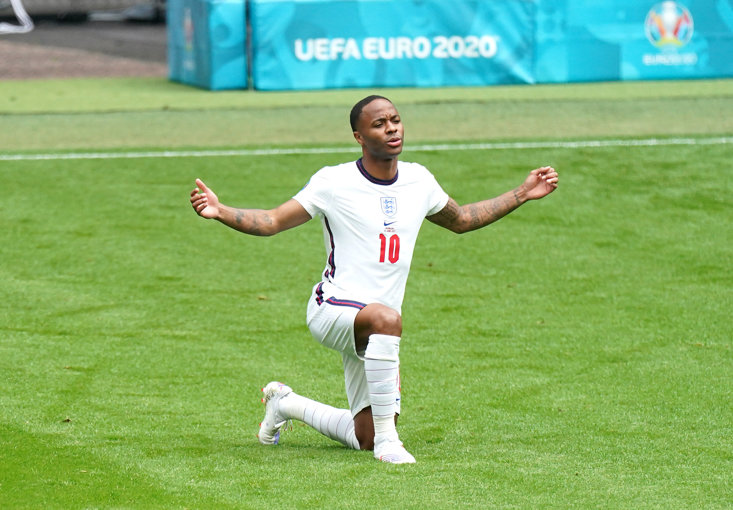 Bafflingly booed in the friendlies and at the start of the tournament for this stance, the players never wavered in their belief they were doing the right thing. As they have kept winning, and grown into the tournament, the boos have faded. Before the semi-final, they barely registered amid the applause, led by the Danish team.

Although there is still plenty of work to be done when it comes to homophobia in football, captain Harry Kane supported Germany’s stance in representing the LGBTQ+ community by donning a rainbow armband for the last-16 tie. This came after UEFA’s decision to refuse the Germans permission to light up their own stadium in their group stage match against Hungary, after anti-LGBT banners were seen in Budapest.

Of course Southgate deserves huge credit for inspiring this team and uniting the country, but as individuals and a collective, there is a whole lot to be proud of. This England team knows exactly what they stand for. They are the team for equality, for everybody. The game on Sunday is seismic, but win or lose, Southgate and this team is one to be unashamedly proud of.

x
Suggested Searches:
The Sportsman
Manchester United
Liverpool
Manchester City
Premier League
More
football
Carson Pickett Becomes First Player With Limb Difference To...
Carson Pickett has made history, becoming the first limb difference player to play for the United States [ ... ]
football
Happy Birthday Troy Deeney: Here Are The Most Memorable Championship...
Iconic EFL Championship striker Troy Deeney turns 34 today and everyone remembers his dramatic goal [ ... ]
football
Style And Substance: The Lowdown On Manchester United New Boy...
While Manchester United fans were busy scouring the internet for crumbs of information on Frenkie de [ ... ]
football
Online Hate Crimes Will Now Result In Football Banning Orders...
People who are convicted of football-related online hate crime can now receive banning orders that prevent [ ... ]
football
LIVE Transfer News: De Jong, Raphinha & More
Good morning and welcome to The Sportsman's LIVE transfer blog, where we will have you covered for [ ... ]
football
Football Docs To Binge On Amazon Prime Before All Or Nothing:...
The much-anticipated All or Nothing: Arsenal documentary finally has a release date! The story of the [ ... ]
football
From Stadium MK To Wembley: Our Women's Euro 2022 Stadium Guide
Euro 2022 is edging closer and England is all set to welcome fans from across the continent to witness [ ... ]
football
Newcastle United Finally Get Their Man As Sven Botman Signs
Newcastle United have confirmed the signing of Dutch centre-back Sven Botman from Lille for an undisclosed [ ... ]
football
Chelsea Close To £55M Deal For Leeds United's Raphinha
It’s the transfer window that just keeps giving!  Chelsea are now reportedly close to agreeing [ ... ]
football
Happy Birthday Kevin De Bruyne: The City Man Could Be In For...
Kevin De Bruyne turns 31 today and while he can expect no shortage of presents, he is a man with more [ ... ]
football
Forget Transfers, Here Are The Players That Could Improve Their...
The transfer window offers a twice-a-year opportunity for clubs to re-jig their squads, shift the deadwood [ ... ]
football
Success Or Failure? Every EPL Club's Most Expensive 2021-22...
The summer transfer window is well underway and fans across the Premier League are demanding that their [ ... ]
football
Netherlands Striker Miedema Feels Euro 2022 Can ''Put Women's...
Netherlands international Vivianne Miedema believes that this summer’s Euro 2022 in England is [ ... ]
football
LIVE Transfer News: Raphinha, Sven Botman & More
Good morning and welcome to The Sportsman's LIVE transfer blog, where we will have you covered for [ ... ]
football
Richarlison Over Antony: The Transfers Man United Need To Do...
With Manchester United’s summer business continuing to revolve around Frenkie de Jong, discussion [ ... ]
football
How Arsenal Can Get The Best Out Of Gabriel Jesus As £45m Deal...
Arsenal are closing in on the signing striker Gabriel Jesus from Manchester City in a deal [ ... ]
football
Four Number 17s Sadio Mane Will Look To Live Up To At Bayern...
Sadio Mane is embarking on a new adventure with Bayern Munich, having ended his six-year love affair [ ... ]
football
Arsenal Keeper Matt Turner's Journey To The Prem Has Had Many...
It’s all systems go at the Emirates Stadium with Arsenal acting swiftly to bolster their squad [ ... ]
football
£170M! The Long-Term Cost Of Chelsea's Horror Romelu Lukaku...
Romelu Lukaku’s loan return to Inter Milan is imminent and just one year after Chelsea paid £97.5m [ ... ]
football
The Third Best Stadium In Glasgow, Hampden Park Desperately...
From the 10-goal thriller between Real Madrid and Eintracht Frankfurt in the 1960 European cup final [ ... ]
football
Premier League Meets Primeira Liga: Why English Clubs Are Raiding...
As Premier League clubs frantically try to assemble squads that will improve their lot this season, [ ... ]
football
Transfer News: Gabriel Jesus To Complete Arsenal Switch
The latest news from the football world sees Manchester City and Arsenal linking up once again, this [ ... ]
football
Burnley Manager Vincent Kompany Talks Transition, Transfers...
Vincent Kompany was a fine footballer – but can he cut the mustard as a manager? The former [ ... ]
football
Clowes’ Bid Accepted For Derby County As Rosenior Is Named Interim...
It’s been a torrid season for Derby County fans, ending in relegation to League One, but [ ... ]
football
Man United, Chelsea And Newcastle Linked With Neymar Ahead Of...
Following reports that Neymar is considering leaving PSG this summer, it is now being claimed that only [ ... ]
football
LIVE Transfer News: Chelsea Chasing Sterling & De Ligt
The final day before the Premier League clubs begin their pre-season training and there's [ ... ]
football
European Champions On 10 Days Notice: 30 Years On From Denmark’s...
“Our sponsors were not prepared for us to go, so what we had was the Under-21s kit. When you look [ ... ]
football
QPR Boss Michael Beale On Carlo Ancelotti, Steven Gerrard And...
Michael Beale began his coaching career at Bromley Church Hall. With coats and bags pushed to the side [ ... ]
football
Andy Carroll To Club Brugge And Football's Weirdest Transfers
Andy Carroll is reportedly in talks with Club Brugge over a move that would see him potentially play [ ... ]
football
Cristiano Ronaldo Next Club Odds If He Leaves Manchester United...
Even at the age of 37, Cristiano Ronaldo remains one of the most dangerous footballers on the planet. [ ... ]