Only 55 men truly know what it is like to face ‘Iron’ Mike Tyson. But a generation of gamers have endured the next best thing, as the former undisputed heavyweight champion terrorised Nintendo Entertainment System owners during the 1980s as the final boss of the iconic Mike Tyson’s Punch-Out!!.

The world of boxing has changed in the years since the legendary title first came swinging into arcades in 1983, and the franchise has taken on various iterations over the years. What remains is the fun, and often frustrating, path to become the champion of the World Video Boxing Association. Glove up and step into the ring, as we go toe-to-toe with the legendary Punch-Out!! series.

The first version was developed by Nintendo in 1983 as a way to utilise the two-screen arcade technology the company had developed for Donkey Kong. This first version cast the player as a green-haired slugger whose torso was a translucent grid, making it easier to see your opponent. Unnamed at this point, you could name the boxer anything you like, as long as you could spell it using the three available letters. I shudder to think of the amount of times ‘Poo’ and ‘Bum’ competed for boxing supremacy. The arcade version of Punch-Out!! introduced many franchise mainstays to the ring, including Glass Joe, Piston Hurricane and Mr Sandman. 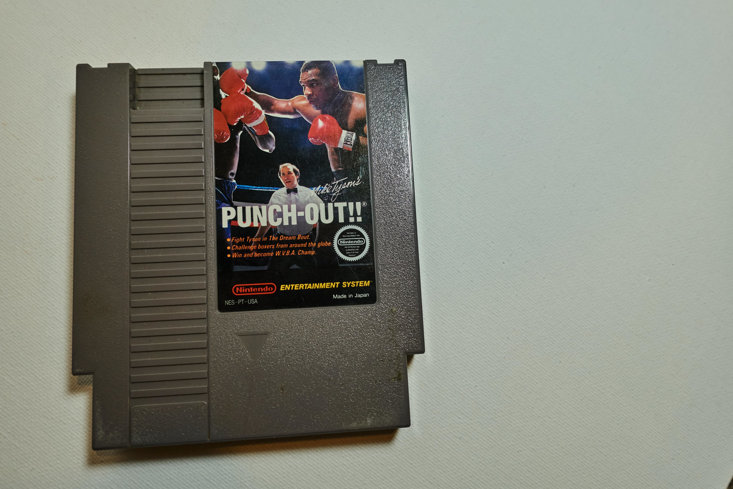 With the benefit of hindsight, it seems a natural fit that the defining boxing game of the 80s featured the defining boxer of that decade as its antagonist. But getting the Catskill knockout artist on-board was actually something of a gamble for Nintendo. Tyson came to the attention of Nintendo of America founder Minoru Arakawa when he attended one of Mike’s early fights. Nintendo offered the up and coming prospect $50,000 dollars to sign a three-year contract for use of his license. By the time the game was released in 1987, Tyson was the undisputed heavyweight champion of the world, and the legendary video game giant had got the bargain of the century.

The nearly-unbeatable visage of Tyson was not the only enduring icon to be part of the game. His opponent, the player-controlled Little Mac, was every bit as vital to the game’s success. Little Mac was so-called because the developers made him deliberately tiny, in order for player’s to be able to see their opponent above his head, without needing to make him translucent like in the arcade version. He carried the same green and black colour scheme as the user-named fighter from the previous iteration, leading many to speculate that the man they’d been naming ‘Fuc’ to amuse their friends was actually Little Mac himself.

Boxing fanatics and gamers the world over ate up Mike Tyson’s Punch-Out!!, learning the intricate strategies and time-based puzzling needed to outbox the likes of bullfighter Don Flamenco, the giant King Hippo and returning arcade boss Super Macho Man. Your reward for steering Little Mac through the circuits of the WVBA is a fight with Mike Tyson. Or at least it was, until 1990. By the time Tyson’s initial three-year deal expired, he was coming off his shock title loss to James ‘Buster’ Douglas. He was also arguably the biggest sports star on the planet, commanding vast multiples of the $50,000 Nintendo got his likeness for in 1987.

Nintendo opted not to use Tyson, and re-released the game with the fighter being re-skinned as Mr Dream. Every re-release of the title since has featured ‘Dream’ instead of Tyson, drawing the ire of the Hall of Fame boxer in a series of 2019 tweets when the game returned on Nintendo Switch.

Mike Tyson
@MikeTyson
heard @Nintendo was doing the new “Punch Out” without even contacting me. it wont be the same. my knockouts made the game. thats whack.
10230
59942

Between that contentious Switch re-release, as part of the console’s NES game library, and the iconic 1987 Mike Tyson edition, the Punch-Out!! franchise’s influence has never waned. Super-Punch Out!! arrived in 1994 on the Super Nintendo to breathe new life into the series, before a reboot came to the Wii in 2009. This sequel featured a hilarious marketing campaign in which boxer Paulie Malignaggi played Little Mac in a two-minute sketch that includes references to Rocky, a catch-up of the last fifteen years of Mac’s life, and a superb cameo from his trainer Doc Louis.

Even during the years without a new Punch-Out!! entry, Little Mac has kept busy. The character has turned up in Fight Night Round 2, Captain Rainbow and the Super Smash Brothers series. Often voted into lists of the greatest video game characters of all-time, Mac is an enduring icon from a game that defined boxing simulators for years to come.

What does the future hold for the miniature boxing idol? In his first appearance, his on-screen bio gives his age as 17. That would make him 51 years of old today. Mike Tyson is only 55 himself. You know what this means don’t you? Anyone for Mike Tyson’s Super-Exhibition!!?