Rugby League
News
We've got you covered ahead of a busy weekend of rugby league action
TheSportsman
15:02, 24 Mar 2022

There’s some huge rugby league action televised over the next few days, not least The Sportsman’s exclusive broadcast of the Challenge Cup tie between St Helens and Whitehaven RLFC. Here’s everything you need to know about all the games hitting the screen this weeknd.

Friday kicks off with one of the most intense rugby league rivalries in the world when South Sydney Rabbitohs take on Sydney Roosters. It’s been a poor start to the campaign for Rabbitohs, having struggled since the departure of Adam Reynolds, but they’ll be hoping that changes when they take on their fiercest enemies. The Roosters picked up their first win last week and will be hoping to continue that momentum.

Wigan Warriors get their first taste of knockout rugby in 2022 when they take on Salford Red Devils in the Challenge Cup. Salford ended Wigan’s nearly decade-long unbeaten run in this tournament back in 1996, one of the Challenge Cup’s biggest ever upsets, and while a win over Warriors this year won’t match the magnitude of 26 years ago, Paul Rowley’s side will be looking to rock the apple cart once again. 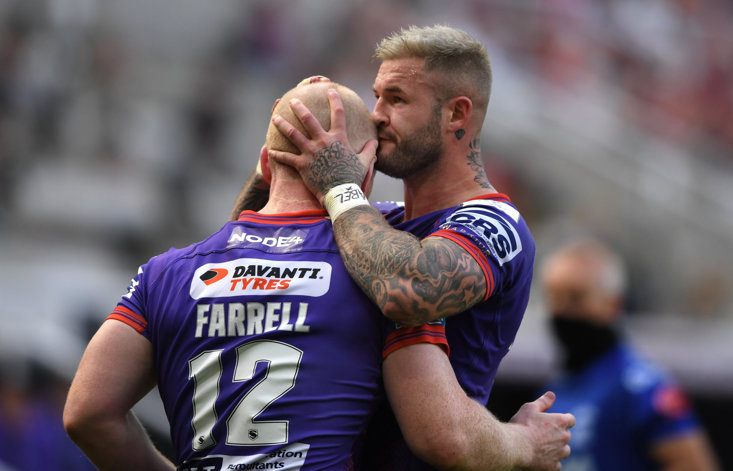 Canberra Raiders vs Gold Coast Titans kicks off the weekend with a fascinating NRL tie. Both sides have claimed one win each this season and will be looking to give their campaigns a boost with a respectable 2-1 start. It’ll be interesting viewing for English audiences with a number of players from these shores plying their trade in the Australian capital, while former St Helens coach Justin Holbrook is in charge of the Titans.

Whitehaven know that absolutely nobody will give them a chance when they welcome Super League champions St Helens and The Sportsman cameras in the Betfred Challenge Cup on Saturday afternoon.

But coach Jonty Gorley’s part-timers also know that nobody gave winless Toulouse any hope against the unbeatable Saints last weekend, and the French side produced a sensational upset to claim their first ever top-flight win.

The Sportsman is ready to show a proper Cup tie, one with all the romance and potential of a monumental shock, against the backdrop of a likely walloping for the underdogs if Saints turn up hungry.

Leeds enter this West Yorkshire derby without Richard Agar at the helm, following the head coach’s departure from the Rhinos earlier this week after a poor start to the Super League campaign. A repeat of the 2014 Challenge Cup final, a win for either of these early season strugglers would be monumental for confidence.

Following on from Friday’s Sydney derby is Sunday’s all-Queensland affair. Brisbane Broncos are undefeated this season and will have a great chance to continue their red hot form when they take on North Queensland Cowboys, who suffered a sixth straight loss against league leaders Melbourne Storm.

Warrington host Wakefield for a second week on the trot, having collided in the Super League on Saturday. Trinity stunned Wolves in a see-saw match last weekend, running out 22-38 winners, but the latter have a decent record in this tournament and Daryl Powell will expect his side to respond.

In the weekend’s final televised rugby league tie sees Betfred Championship outfit Barrow and Super League side Huddersfield Giants go head-to-head. Barrow have been one of the second-tier’s surprise packages this term and are in the mix at the top of the table. Could there be an upset in the air in Cumbria this weekend?