WBA ‘regular’ lightweight champion Gervonta Davis has agreed a fight with unbeaten contender Ryan Garcia. The pair will meet in Las Vegas next April, pending ‘Tank’ winning a tune-up fight in January. In a year blighted by boxing’s biggest names giving each other a wide berth, it is refreshing to see two of the best lightweights on the planet agree to fight.

There is still the detectable stench of modern boxing, with the fight taking place at a catchweight of 136lbs. The move seems entirely pointless when Davis holds a belt at lightweight, but there is some justification. Garcia has boxed above the 135lb limit in his last two bouts, while ‘Tank’ has previously held a title up at super lightweight. It’s a shame this bout will exist outside normal boxing parameters but, after a meagre harvest of superfights, we should be glad it’s happening at all.

What does the fight mean for both men? It’s certainly a risky fight, with both staking unbeaten records and perceptions that they represent the future of the sport. Garcia is the one taking the step up in class, with ‘Tank’ having won his first world title in 2017.

The pandemic, and a break to deal with mental health issues, have seen Garcia frozen in perpetual “next big thing” status for a number of years. ‘KingRy’ looked to have belatedly arrived on the world stage when he climbed off the canvas to halt former world title challenger Luke Campbell in January 2021. But outside-ring issues kept him on the sidelines until April of this year. He has racked up victories over Emmanuel Tagoe and Javier Fortuna since.

In the most stacked division in boxing, ‘The Flash’ has been accused of avoiding the biggest names. While the likes of Teofimo Lopez, Vasiliy Lomachenko, Devin Haney and George Kambosos Jr have carved out history fighting each other, Garcia has leant heavily on his social media popularity while fighting opponents several rungs below him. But the Californian is still only 24, and his move up in class seems to be arriving at the perfect time. 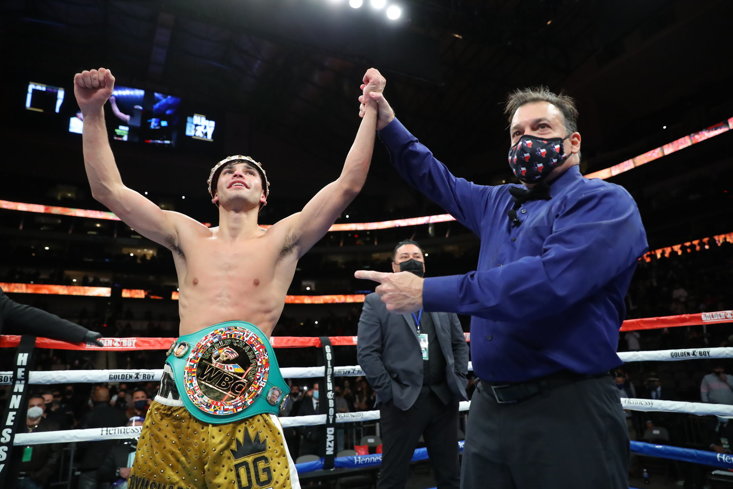 Davis might not be the perfect opponent, though. ‘Tank’ has rolled over 27 opponents, knocking out 25 of them and picking up world trinkets at three weights. He has made mincemeat of former and reigning champions like Leo Santa Cruz, Yuriorkis Gamboa and Jose Pedraza on his way to the summit. Garcia was long overdue a fight against a championship-level competitor. But ‘KingRy’ might regret choosing this one in particular.

While Davis’ dubious WBA ‘regular’ prize is not expected to be on the line, there are real rewards here for the winner. If the victor can bring himself to shed an extra pound, then there is a wealth of options at lightweight. Two-weight king Shakur Stevenson has just joined the fray at 135. Undisputed champion Haney and Lomachenko are set to meet next year. Garcia or Davis against the winner of that would set pulses racing.

This is what boxing is all about. Two big name fighters, one fearsome and one flashy, going at it in a true clash of styles. It’s cliche to point it out, but this is truly a fight where the fans are the real winner. After the likes of Tyson Fury vs Anthony Joshua, Conor Benn vs Chris Eubank Jr and Terence Crawford have fallen by the wayside for various reasons, we need ‘Tank’ vs Garcia. At least there will be one card in 2023 featuring two fighters people actually want to watch against each other.

x
Suggested Searches:
The Sportsman
Manchester United
Liverpool
Manchester City
Premier League
More
boxing
Oleksandr Usyk Enters Ring After Tyson Fury Batters Derek Chisora
Tyson Fury retained his WBC heavyweight title with a controlled and dominating display over fellow [ ... ]
boxing
Fit For A Gypsy King: The Greatest Performances Of Tyson Fury
Look alive you big dossers, 'The Gypsy King' is back. Tyson Fury defends his WBC championship [ ... ]
boxing
Del Boy's Half-Dozen: The Greatest Victories Of Derek Chisora
Despite being perhaps the most entertaining British heavyweight of this generation, Derek Chisora’s [ ... ]
boxing
Oleksandr Usyk Promoter Targeting Undisputed Clash With Tyson...
An undisputed heavyweight title fight between Tyson Fury and Oleksandr Usyk could happen in early [ ... ]
boxing
Tyson Fury On Retirement: I’m Not Built For A Normal Life
Tyson Fury returns to the ring this weekend when he puts his WBC heavyweight world title on the line [ ... ]
boxing
Mike Tyson, Floyd Patterson And Boxing's Youngest Heavyweight...
On this day in 1956, Floyd Patterson stopped the great Archie Moore in five rounds to become the heavyweight [ ... ]
boxing
Everything You Need To Know About Estrada Vs 'Chocolatito' III
Not all trilogies are created equal. But a rivalry poised at one win apiece, with each previous meeting [ ... ]
boxing
On This Day In 2015: Tyson Fury Ends The Wladimir Klitschko...
Tyson Fury walks into Tottenham Hotspur Stadium this Saturday as a proven commodity. As he makes his [ ... ]
boxing
What Does Dillian Whyte Have Left? Controversial Win Leaves...
Whatever you thought of the decision, something wasn’t quite right about Dillian Whyte’s [ ... ]
boxing
Tyson Fury vs Derek Chisora III: Everything You Need To Know...
Tyson Fury puts his WBC heavyweight title on the line this weekend when he meets Derek Chisora in the [ ... ]
boxing
Gorman Vs Wardley Is A Throwback Fight Worthy Of The British...
On Saturday night, Fabio Wardley and Nathan Gorman will honour one of the great British boxing traditions. [ ... ]
boxing
Five Blows From The Body Snatcher: Dillian Whyte's Greatest...
Dillian Whyte will be looking to bounce back to winning ways this weekend when he takes on undefeated [ ... ]
boxing
Carl Froch Vs George Groves And Boxing's Great British Grudge...
Nine years ago today, Carl Froch and George Groves collided at the Manchester Arena, waging the first [ ... ]
boxing
Dalton Smith: 'Get A Couple Of Million And I'll Smack A YouTuber!'
Dalton Smith is a star on the rise. The Sheffield super lightweight has just made the first defence [ ... ]
boxing
Zach Parker Vs John Ryder: Everything You Need To Know
The WBO interim super-middleweight title is on the line at the O2 Arena this weekend in a fascinating [ ... ]
boxing
Dillian Whyte Vs Jermaine Franklin: Everything You Need To Know...
Heavyweight contender Dillian Whyte will be looking to bounce back to winning ways this weekend when [ ... ]
boxing
The Weekend Boxing Preview: European Titles, Unbeaten Superstars...
After a star-studded weekend where old stagers Ricky Hatton and Floyd Mayweather took part in exhibitions, [ ... ]
boxing
Martin Scorsese At 80: Celebrating Raging Bull, The Iconic 'Anti-Rocky'
“And though I'm no Olivier, if he fought Sugar Ray he would say that the thing ain't the [ ... ]
boxing
Why Dmitry Bivol Should Make 'Canelo' Come Back To 175 Pounds...
Saul ‘Canelo’ Alvarez has targeted a May return to the ring, after having surgery on his [ ... ]
boxing
Fury-Wilder 4 And Usyk-Hrgovic: The Heavyweight Fights Nobody...
Ask any boxing fan which heavyweight fight they would cherish above all others and you’d get the [ ... ]
boxing
The Panel: Should Women's Boxing Move To Three-Minute Rounds?
Welcome to The Panel, where we speak to a group of star names from across the fight game about the big [ ... ]
boxing
A Tale Of Two Exhibitions: Ricky Hatton And Floyd Mayweather...
On 8th December 2007, Floyd Mayweather defeated Ricky Hatton in Las Vegas, with the WBC and The Ring [ ... ]
boxing
Tommy Fury vs Paul Bamba Cancelled: Is Fury Unprofessional,...
Tommy Fury’s stock has never been lower. This weekend, when due to fight Paul Bamba, he weighed [ ... ]
boxing
Redemption Day: Natasha Jonas Clinches The Treble Against Marie-Eve...
A year ago, Natasha Jonas’ two most recent fights were a pair of failed attempts to win world [ ... ]
boxing
Chasing Gold: Conner Tudsbury Determined To Become A Mancunian...
There was something of a media circus the day Moss Side Fire Station Boxing Club opened its doors in [ ... ]
boxing
Haney-Lomachenko, Stevenson-Cruz And More Ordered At WBC Convention
The World Boxing Council hosted their 60th annual convention, in which they laid out plans and policy [ ... ]
boxing
'You Want Homer To Fight Tatum?!': 26 Years Of 'The Homer They...
It was a heavyweight title fight like no other. Watched by 9.7 million viewers on its initial airing [ ... ]
boxing
Back From The Brink: Natasha Jonas Has Gone From Nearly Girl...
A year ago, Natasha Jonas had failed to win her last two bouts. The decorated amateur had seemed nailed [ ... ]
boxing
This Is Hitman Heritage: The Very Best Of Ricky 'The Hitman'...
Ricky Hatton returns to the ring this Saturday in an exhibition bout against legendary three-weight [ ... ]
boxing
Ricky Hatton vs Marco Antonio Barrera: Everything You Need To...
British boxing legend Ricky Hatton returns to the ring this weekend for the first time in nearly a decade [ ... ]