Tennis
News
The Polish star has won the first two WTA 1000 events of the season, including Indian Wells at the weekend
Hector Nunns
15:35, 22 Mar 2022

Whatever Iga Swiatek’s still relatively new coach Tomasz Wiktorowski said to her after scraping past three-time Grand Slam winner and former world No1 Angie Kerber in the last 16 at Indian Wells in March, the words were clearly absorbed and executed to perfection during a march to the title.

The 20-year-old from Poland, having battled to come from a set down in each of the first three rounds, did not drop another one on her way to back-to-back titles and a second successive WTA 1000 success, subsequently seeing off Madison Keys, Simona Halep and then Maria Sakkari in tricky, windy conditions in the final.

Yet watching Swiatek struggle against her far more experienced and wily German opponent that day earlier in the event told you almost everything you needed to know about the Pole’s almost unlimited potential, a simply awesome power game…but also the only things that might prevent her from achieving truly phenomenal feats in the game.

At times the 34-year-old Kerber, who has won Slams at Wimbledon, the US Open and the Australian, was being run ragged. But some heroic defence, the old adage of making your opponent play just one more shot, was keeping her in it. Because on so many occasions that ‘one more shot’ was uncompromisingly blasted wide or long by Swiatek.

Although Swiatek, already with a French Open Slam title to her name in 2020, eventually came through 4-6, 6-2, 6-3 the unforced error count of 48 told its own story – that the win should have been far more comfortable than it was, and that against the very top players currently such a high tally of mistakes would be more costly.

But the three matches that followed saw Swiatek combine all the winners with a far more stingy attitude to giving up cheap points, and that was simply all too much for those in her path.

Swiatek has scorched out of the blocks this season. The win over Sakkari in the final in the California desert was a fifth title in total, a second this season, and took a winning streak in matches to 11-0 ahead of the Miami Open which is next on the calendar – a run that lifted her to a career-high No 2 in the world rankings.

Iga Świątek
@iga_swiatek
🏆 It has been more than a day since I won the @BNPPARIBASOPEN and it is still challenging to describe how important this one is to me and the way I achieved it...
More ➡️ 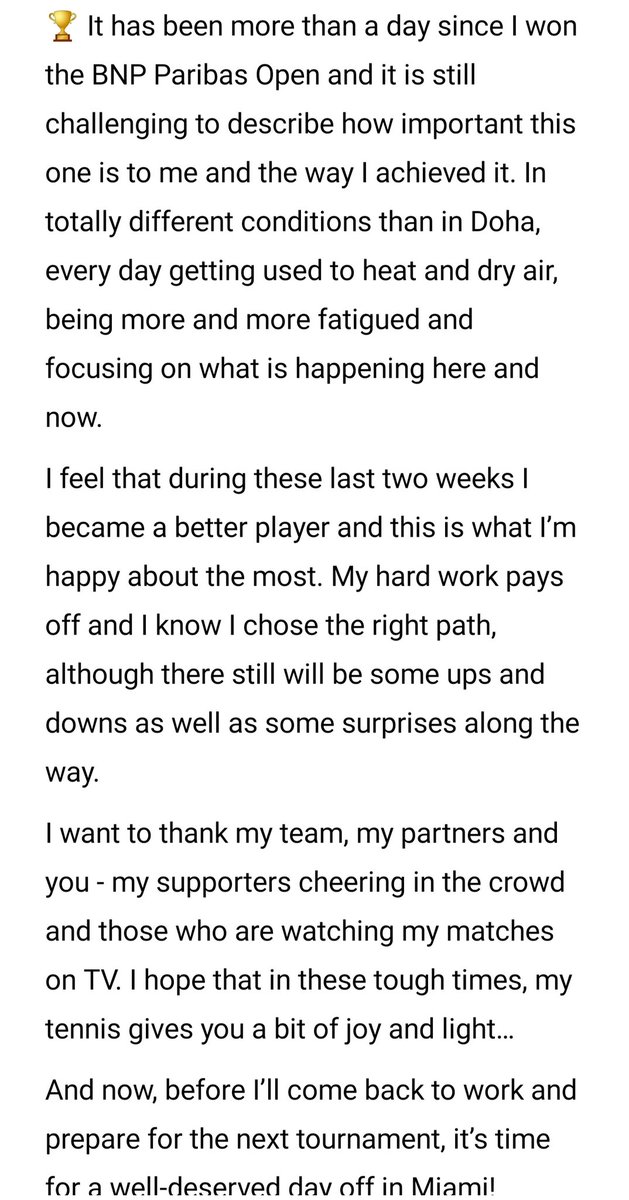 And come the end of 2022, if the mantelpiece at home is as full of silverware as currently appears might be the case, then the decision in the off-season to switch coaches away from Piotr Sierzputowski, who was with her for that Roland-Garros triumph, to Wiktorowski - who worked successfully with compatriot Agnieszka Radwanska – will look both courageous and judicious.

And Wiktorowski’s main jobs look to be to harness Swiatek’s incredible power off either wing, but particularly the forehand; to further develop the second serve, with the first serve already a real weapon; improve elements of the mental side including concentration; and impart a wider awareness of all aspects of the tactics best employed against individual opponents.

If as expected these facets of Swiatek’s game, which is already devastating at its best, continue to be enhanced she will be a frightening prospect at all the big tournaments this year and beyond, and world No1 Ash Barty and the rest of the top 10 will have their hands full. Because the stark reality is that Swiatek can only get better.

Shortly after making the coaching change, Swiatek said: “I felt it was a good time for a next step and a change to maybe, like, reset a little bit. I'm pretty happy that Tomasz was free because I also felt like I wanted to work with someone who was from Poland.

“We are using tournaments to get to know each other a bit. We're talking a lot about tennis, even off-court stuff. I feel like I just need some time to build that relationship. I can see the experience he has, and that he's been through a lot on tour because he's been there for many years. That gives me more comfort and stability.”

The victory at the BNP Paribas Open came after claiming the title in Qatar with a dismantling of Anna Kontaveit in the final for the loss of only two games. And Swiatek acknowledged her growing ability to find ways to win even if the winners are not all flying in from the start.

She said: “I think just getting older and more experienced helps because a few years ago I didn’t even get the idea of being happy about winning ugly. Now I want to use the experience of other players. I watched a lot of tennis in the past two years and I've seen many times where Rafa Nadal, for example, wasn't playing his best tennis but still he was finding solutions.

“That’s a lesson for all of us that we must keep pushing, keep fighting and keep wanting to get the solutions and getting better. That inspires me.”

Already with the knowledge she can thrive on the clay in Paris and having got to the semi-finals in Melbourne this year, Swiatek will now be looking to do herself justice at Wimbledon and the US Open. In neither has she progressed beyond the last 16 to date – but expect that to change this summer.

x
Suggested Searches:
The Sportsman
Manchester United
Liverpool
Manchester City
Premier League
More
tennis
British Star Cameron Norrie Wins First ATP Title On Clay Ahead...
Cameron Norrie saw his preparations for the French Open come together perfectly by winning his [ ... ]
tennis
Wimbledon Faces Major Dilemma As WTA And ATP Withdraw Rankings...
Unless there are further seismic developments in the weeks to come, this year’s Wimbledon Championships [ ... ]
tennis
End Of An Era For British Women's Tennis As Robson Joins Konta...
As they say, nothing lasts forever, and in sport careers come and go in the blink of an eye. On Monday, [ ... ]
tennis
Everything You Need To Know About The 2022 French Open As Djokovic...
The French Open is here and the qualifiers have begun for the second Grand Slam tournament of the year. [ ... ]
tennis
Rafael Nadal's Ten Most Career-Defining Wins Ahead Of Seismic...
As Rafael Nadal continues his build-up for the French Open, where he will attempt to extend two huge [ ... ]
tennis
Can Alcaraz Follow In Compatriot Nadal's Footsteps And Dominate...
The French Open is just around the corner and after falling at the semi-final stage last year, everyone [ ... ]
tennis
Andy Murray v Novak Djokovic: The Great Battle Resumes After...
It has been five years in the making. Andy Murray and Novak Djokovic go to battle once again on Thursday [ ... ]
tennis
British Stars Enjoy Positive Start To Madrid Open
It has been a fine start for British talent in the Madrid Open this week with Emma Raducanu, Dan Evans, [ ... ]
tennis
Can Croatia’s Junior Sensation Petra Marcinko Follow World No1...
A quick glance at the roll call of honour of junior girls Grand Slam winners is enough to show it is [ ... ]
tennis
Emma Raducanu Needs The Freedom To Develop At Her Own Pace
Change is a thing of nature, it happens all the time and sport is no different. For teams, players come [ ... ]
tennis
Outspoken Novak Djokovic Is In Danger Of Following In Margaret...
‘Sometimes the wise man says nothing at all’ Novak Djokovic could learn to take this advice [ ... ]
tennis
British Tennis Is In Safe Hands As Cameron Norrie Breaks Top...
Emma Raducanu’s US Open triumph in September was a monumental piece of British sporting history [ ... ]
tennis
No Escape From Alcaraz: The Latest Teenage Sensation Taking...
Last year, the world of tennis fell in love with a teenage sensation as Britain’s very own Emma [ ... ]
tennis
Naomi Osaka Is Winning Matches, But More Importantly Smiling...
Naomi Osaka has battled her way through to the semi-finals of the Miami Open after defeating America’s [ ... ]
tennis
Linda Fruhvirtova: The 16-Year-Old Sensation Following In Sharapova's...
What were you doing at 16? Probably not making an impact on the sport of tennis in the same way that [ ... ]
tennis
Grand Slam Winners Thiem & Wawrinka In Joint Injury Return On...
For two former Grand Slam winners, who both climbed as high as No3 in the world, the Andalucia Open [ ... ]
tennis
Miami Open: Jack Draper A “Better Player” Ahead Of Rematch With...
On Friday, out in the Florida sun, the heat will rise on court at the Miami Open as we witness a Battle [ ... ]
tennis
Injury Setback Is Just Another Hurdle For Nadal To Clear As...
2022 has so far exceeded expectations for Rafael Nadal and some of the tennis he has showcased has been [ ... ]
tennis
Ashleigh Barty Retires: ''There Is No Right Or Wrong Way To...
World No1 and reigning Wimbledon champion Ash Barty has left the tennis world stunned by announcing [ ... ]
tennis
On This Day: Roger Federer Joins Jimmy Connors As A Centurion
Roger Federer is a tennis icon who has spearheaded an era of greatness and intense competition. His [ ... ]
tennis
World No1 Daniil Medvedev Ushering In A New Era On The Court
The tide is changing in tennis. A new era is being ushered in as an 18-year monopoly has finally come [ ... ]
tennis
One Year Since Novak Djokovic Won The Australian Open, Has He...
It’s been quite the year for Novak Djokovic, who is back in action today. On this day in 2021, [ ... ]
tennis
Why John McEnroe Epitomises The Best In Tennis And How It Can...
It’s nearing the end of the long, hot summer. The year is 1984. You’ve got your Member’s [ ... ]
tennis
Djokovic's Vow To Miss Tournaments Poses Risk For His Grand...
We may be in February and the Australian Open is already done and dusted but the Novak Djokovic Covid [ ... ]
tennis
Del Potro's Tennis Legacy Is Secure Ahead Of Argentine's Imminent...
Tennis is preparing to bid farewell to one of the star players of this era. He may not be on the level [ ... ]
tennis
Greatest Of All Time? Nadal's 21st Grand Slam Title Makes Him...
On Sunday we witnessed history, and it epitomised the great period of rich history of tennis that has [ ... ]
tennis
Rafael Nadal Pulls Off The Ultimate Comeback To Win The 2022...
Rafael Nadal produced an astonishing comeback to secure the most improbable victory of his career and [ ... ]
tennis
Ashleigh Barty Becomes First Home Singles Winner Of Australian...
For 87 minutes, there was barely a flicker of emotion from Ashleigh Barty. No histrionics, no drama [ ... ]
tennis
Historic Weekend In Melbourne As 2022 Australian Open Comes...
This year’s Australian Open has served up some excellent tennis and we are at the last stretch [ ... ]
tennis
Five Years Since Her Last Grand Slam Win, Serena Williams Remains...
Remarkably, it has now been a full five years since the greatest female tennis player of all [ ... ]