Football
News
The Poland captain can seize his chance on the international stage this summer
Simon Lillicrap
13:04, 27 May 2021

Robert Lewandowski is the greatest striker in the world. His 41 league goals for Bayern Munich this season was the highest by any player in one Bundesliga season, surpassing the great Gerd Muller’s total set back in 1971-72. His consistency is remarkable for his club, but the Polish striker hasn’t yet set an international tournament alight. This summer could change all that.

He hasn’t underachieved with his national team by any means. Lewandowski is by far the highest goalscorer in Poland’s history, having hit 66 goals compared to Grzegorz Lato’s 25, but there has been an overwhelming feeling of disappointment with the nation’s tournament performances in the last decade.

At the World Cup in Russia, in a favourable group alongside Cameroon, Colombia and Japan, Poland came up short, and Lewandowski failed to score a single goal. At Euro 2016, Poland had their best international showing since they finished third at the 1982 World Cup as they reached the quarter-finals, yet that success wasn’t down to their main man. He didn’t even manage a shot on target during the group games, and although he did score in their penalty shootout loss to eventual champions Portugal, many expected more.

In 2014, Poland didn’t qualify and in 2012 as one of the host nations, although Lewa scored the opening goal of the tournament, they embarrassingly finished bottom of a group that contained Czech Republic, Greece and Russia. Hardly elite level opposition.

So, why are things going to change this summer? Well, in the dugout former Swansea manager Paulo Sousa is now tasked with getting the best out of his number nine and the rest of what looks like a talented squad. So far, since taking the job at the start of the year, his only defeat was a late 2-1 loss to England at Wembley, and that was without Lewandowski.

The majority of his squad will be familiar faces to fans of the English game too. Wojciech Szczesny and Lukas Fabianski are two top goalkeepers, Southampton’s Jan Bednarek has Premier League experience while Barnsley centre-back Michal Helik has had an exceptional season as a key member of the Tykes top six finish. 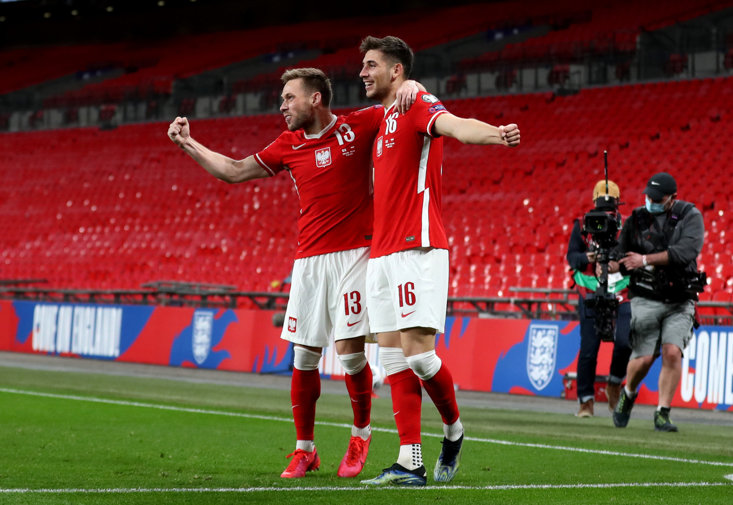 MODER EQUALISES FOR POLAND AT WEMBLEY

Further forward, Matuesz Klich has shone for Leeds, Derby’s Kamil Jozwiak is still one of the top young talents in the Championship and Jakub Moder has broken into the Brighton and Hove Albion first team. Meanwhile Norwich winger Przemyslaw Placheta offers searing pace, and a good option from the bench.

Grzegorz Krychowiak is still an experienced head in midfield, while Kamil Glik offers composure at the back, but the unfortunate injury to Krystof Piatek means Arkadiusz Milik and Lewandowski will be tasked with finding the net. Milik has been in red hot form, hitting nine goals in 14 games since joining Marseille on loan in January, but captain Lewandowski knows this is his stage to deliver.

Once again, Poland have been dealt a kind hand in the group stage. Spain, even without their Real Madrid contingent, are likely to win the group but Sweden and Slovakia are well beatable, and they should be qualifying for the knockout stage.

From there, as they showed against England in March, they have the ability to compete with any of the top teams in the tournament over 90 minutes. If the rest of the squad can keep them in the game, Lewandowski only needs one sniff at goal. After too many tournaments of disappointment, it’s time the Bayern Munich man stepped up the plate for his country this summer.

Check out our other Group E previews here: Spain, Sweden and Slovakia.