The teacher defeated the student, as the most prolific French Open winner of all-time clinched another title at Roland Garros. Rafael Nadal beat Casper Ruud 6-3, 6-3, 6-0 to lift his 14th French Open title. Ruud had witnessed Nadal light up this court first hand as a 13-year-old fan, and had spent time at Nadal’s academy as a young prospect. Now he has shared a Grand Slam final with the 36-year-old, who also becomes the oldest male winner of the tournament with this victory.

Nadal started strongly, dictating terms and looking as comfortable at the baseline as he did at the net. The iconic Spaniard broke Ruud’s first serve, and despite finding himself broken back, raced to a 4-1 lead. His young opponent showed signs of life, making the aging star move around the court more than was comfortable. But Nadal held his nerve, and his serve, to win the set 6-3.

The first game of the second set saw Ruud facing two break points before eventually holding his serve. Ruud took it to 3-1 in his best spell of the match so far. Nadal soon recovered his composure though and eased into proceedings. A drop shot along the line brought a standing ovation from the Roland Garros faithful, as they began to sense they were seeing a great champion at his best. Nadal racked up five games in a row to take the set 6-3, in just the latest example of him making this famous clay court his own. 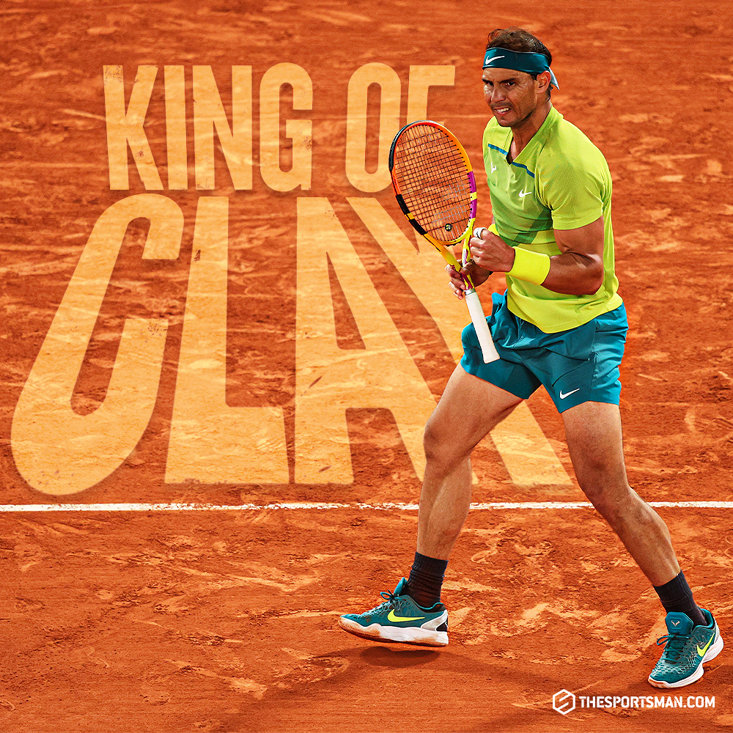 Truly in his rhythm now, Nadal continued to rack up game after game. Ruud’s race was run, and he could do little to stop the modern great at this point. Nadal dropped just eight points across a magnificent third set, winning every game on the way to a 6-0 triumph. Nadal closed out the match winning a remarkable eleven games in a row.

The injuries Nadal has suffered created doubt over how many more moments like this there would be in his wonderful career. But he has lifted a 22nd Grand Slam title, and doing so in a competition that has meant so much to him will have made the triumph extra special. Legends are often not truly appreciated until they go. If you have any affection for the game of tennis at all, you owe it to yourself to absorb every single performance Rafael Nadal gives us before his time in the sport is at an end.

x
Suggested Searches:
The Sportsman
Manchester United
Liverpool
Manchester City
Premier League
More
tennis
Serena Williams Defeated In Thriller - Is That Her Last Match...
If this was the last time Serena Williams set foot onto the Centre Court, what an incredible memory [ ... ]
tennis
Red-Letter Day For British Stars At Wimbledon As Trio Claim...
The Brit pack are pushing each other on to greater heights – but even by this year’s grass-court [ ... ]
tennis
Controversy For Kyrgios As He Calls Line Judge “Snitch” And...
Arguing with heckling fans, spitting in the direction of one of his chief tormentors in the crowd, calling [ ... ]
tennis
Up Next For Murray And Raducanu: Giant John Isner And Tour Winner...
Who is next up for the British Grand Slam winners after their first-round Wimbledon wins? We take a [ ... ]
tennis
Carlos Alcaraz Plays Down Place Among Wimbledon Favourites After...
Spanish prodigy Carlos Alcaraz was delighted to overcome his first real test on the grass court at Wimbledon [ ... ]
tennis
Former Finalist Matteo Berrettini Withdraws From Wimbledon With...
Italian Matteo Berrettini has had his Wimbledon journey come to an abrupt end after testing positive [ ... ]
tennis
Andy Murray Beats James Duckworth In Four Sets, Throws In A...
Andy Murray has always got on well with Nick Kyrgios – and maybe he has been spending a bit too [ ... ]
tennis
Emma Raducanu Beats Alison Van Uytvanck In Straight Sets On...
The preparation may have been far from ideal, the fitness a long way from 100 per cent and the quality [ ... ]
tennis
22 Not Out: Novak Djokovic's Outstanding Wimbledon Streak Continues
It wasn’t quite child’s play for Novak Djokovic as he made it 22 wins in a row at Wimbledon [ ... ]
tennis
Lesia Tsurenko And Anhelina Kalinina Set The Stage For Poignant...
Lesia Tsurenko and Anhelina Kalinina set up an all-Ukrainian second round match at Wimbledon with day-one [ ... ]
tennis
World No1 Iga Swiatek Proud To Open Wimbledon's Centre Court...
As the world No1 and winner of the recent French Open for a second time, Iga Swiatek has been handed [ ... ]
tennis
“I Can Beat Anyone” - Kyrgios Feeling Confident Ahead Of Wimbledon...
A bullish Nick Kyrgios reckons he can beat absolutely anyone in the Wimbledon draw on his day and hopes [ ... ]
tennis
Coco Gauff: Teenage Tennis Star And Already Spokeswoman For...
As if being one of the best young tennis players in the world striving to win tournaments and establish [ ... ]
tennis
Djokovic Has Reservations Over “Fairness” Of Russian And Belarusian...
Novak Djokovic admits he still has reservations about what he called the ‘fairness’ of Wimbledon [ ... ]
tennis
Andy Murray's Snubbed Saudi Millions Before And Refuses To Play...
In the wake of the new £200million LIV Saudi Arabia-backed Series emerging in golf, the two-time [ ... ]
tennis
Serena Williams Feels Like A 'Part-Time' Tennis Player Ahead...
Serena Williams may be the greatest of all time – but the winner of 23 grand slam singles [ ... ]
tennis
''I've Learnt I'm Resilient'' Emma Raducanu Is Ready For Wimbledon...
Emma Raducanu believes that the setbacks and hurdles she has had to face since sensationally winning [ ... ]
tennis
Rafa Nadal On Injury Battles And Missing Roger Federer At Wimbledon...
Tennis legend Rafa Nadal insists that he has never let any of his many career injuries distract him [ ... ]
tennis
The 15 Greatest Players To Play On Wimbledon's Centre Court
As The Sportsman builds and improves its sports coverage across the board, we will be on site at Wimbledon [ ... ]
tennis
Petra Kvitova Warming Up Nicely For Another Wimbledon Title...
Whisper it quietly…but at 32 Petra Kvitova looks to be heading to Wimbledon with her best chance [ ... ]
tennis
Jo Konta Backs Emma Raducanu To Cope With Intense Spotlight
Former British No1 Jo Konta has backed teenager Emma Raducanu to cope with the ever more fierce spotlight [ ... ]
tennis
Wimbledon 2022 Draw: Andy Murray Begins Campaign Against World...
Andy Murray will open up his bid for a third Wimbledon singles title on Monday against the world No70 [ ... ]
tennis
The Wimbledon Miracle: When 250-1 Wildcard Goran Ivanisevic...
When Goran Ivanisevic brought the Centre Court house down on ‘People’s Monday’ in [ ... ]
tennis
Serena Williams' Winning Return Raises Hopes Of Wimbledon Wildcard...
Almost exactly a year after departing the Centre Court at Wimbledon in agony and tears after withdrawing [ ... ]
tennis
Boulter Downs Wimbledon Finalist Pliskova For First Career Win...
It was just about as Serena Williams was hitting up with new doubles opponent Ons Jabeur on an outside [ ... ]
tennis
Wimbledon Centre Court: How Can I Get Tickets And What’s The...
When it comes to the summer spectacle that is the Wimbledon Championships, most tickets are like gold [ ... ]
tennis
Andy Murray Still An Inspiration, Says British No1 Cameron Norrie...
Andy Murray remains a huge inspiration to the rest of the British tennis pack according to current UK [ ... ]
tennis
Ons Jabeur: They're All Jealous Of Me Playing Doubles With Serena...
As Serena Williams rocks up in sunny, sleepy Eastbourne this week, arguably the sport’s greatest [ ... ]
tennis
Why Berrettini Is Heading To Wimbledon Better Prepared To Become...
History looks set to be repeating itself this summer as Matteo Berrettini has retained his Queen’s [ ... ]
tennis
Who Is Casper Ruud? Wimbledon's Number Three Seed Who Says ''Grass...
23-year-old Casper Ruud, for some, has lived up to his name ahead of Wimbledon. The number three seed, [ ... ]