Tennis
News
The Spaniard's 10th Italian Open victory means he can overtake Roger Federer in the all-time list with a win at Roland Garros next month
Hector Nunns
16:00, 17 May 2021

The next time Rafa Nadal walks out into a court in anger, it will be at Roland Garros as he attempts to extend his own record by claiming an astonishing 14th French Open title – and one that would take him clear of Roger Federer in the all-time list of men's Grand Slam winners.

Not that anyone needed reminding, but the Spaniard served notice that he is both the odds-on favourite and once again the man to beat in Paris with a 7-5, 1-6, 6-3 victory over world No1 Novak Djokovic on the clay over the weekend on Sunday to lift the Italian Open trophy for a 10th time.

Never in the history of the sport has one player been so dominant on a single surface. Compared to the faster hard-court surfaces and especially grass, clay demands greater strength, speed, stamina, upper body strength for a higher bouncing ball, allied to inexhaustible reserves of discipline, consistency, patience and concentration.

Nadal has simply shown more of these qualities than anyone else, ever. And those abilities have provided the platform for so many of his greatest achievements. Barring a shock early exit in Paris, the man from Mallorca will turn 35 during the second Major of the year.

Of his 20 Slams in total, 13 of those have come at Roland Garros in the 16th arrondissement of the French capital, located to the west of the city just south of the Bois de Boulogne. To that you can add two Wimbledon titles, four at the US Open, and just a single success in Australia.

But throw in a double-figure haul at the Italian Open, 12 titles at the Barcelona Open and 11 at the Monte Carlo Masters, not to mention so many others, it is not difficult to identify the bedrock surface of Nadal’s accomplishments.

Statistically at least, winning the French Open again this year would make a very strong case that Nadal, alongside everything else it would represent, is the greatest male player of all time based purely on having the greatest number of Grand Slam victories. ​​

That notion could send Roger Federer fans into apoplexy, since so many of them see the Swiss as an artist without peer or parallel – and even supporters of Serbia’s Djokovic, who though with two fewer Slams on 18 might claim of the three he has the better all-round, all-court game. ​​​​​ 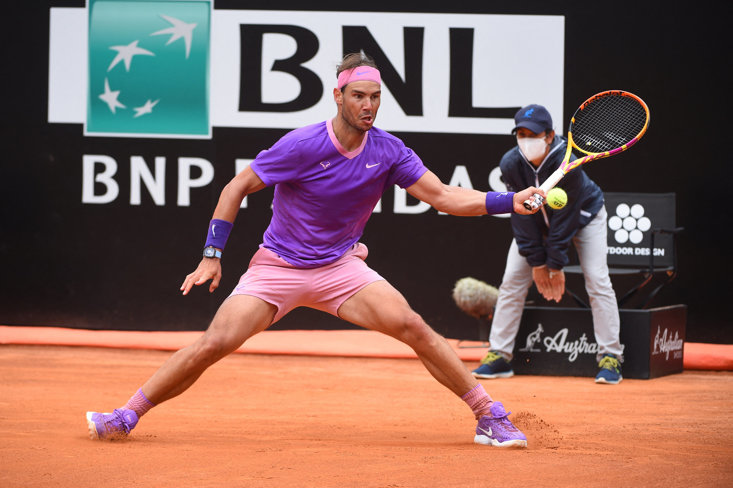 It is certainly interesting to reflect on the splits in their Major wins compared to Nadal and his preeminence on clay. Federer has won Wimbledon on the grass eight times, the Australian Open on six occasions, the US Open five times, and the French just once.

And while Djokovic has also been a victim of Nadal’s incredible consistency at Roland Garros winning there also just the once, he was lifted the trophy five times at Wimbledon, nine times in Australia and on three occasions in New York.

The youngsters tipped to take on the baton are still queuing up behind the three veterans hoping for a bigger share-out of the silverware – but stubbornly and obstinately like some old actor desperate to feel the warmth of the crowd one more time, they are refusing to leave the stage.

Dominic Thiem has got to the final twice in Paris and has a Slam to his name having won the US Open last year, and Stefanos Tsitsipas got to the semi-finals at Roland Garros last year.

Italian teenager Jannik Sinner, already up to No17 in the world, pushed Nadal both in Rome last week and also at the French Open last year, and his time will surely come on the clay.

Alex Zverev agonisingly missed out to Thiem in last year’s US Open final and has a best performance of the quarter-finals at Roland Garros, but if he can keep his focus for the whole fortnight has a game that could take him all the way.

Matteo Berrettini, another Italian and ranked at No9 in the world, is another one you would not be shocked at all to see do well this year in Paris – and he beat emerging clay-court star and 22-year-old Casper Ruud of Norway in the recent semi-finals of the Madrid Open, just before the Rome event.

And what are the chances of Federer himself defying time, age, the odds and the surface to somehow win on Nadal’s ‘turf’? If you genuinely think that could happen, there is a chance to get rich – Federer is available at as much as 60-1 to double his French Open title haul.

With qualifiers beginning on May 24th, the fun in the main draw starts on Sunday May 30th – though Britain’s Andy Murray will be missing from the tournament, having experienced some discomfort last week. After being told by the French Open organisers that he would need to show proof of fitness to get a main draw wildcard, the Scot opted to keep his powder dry for the grass-court season.

So it is left for Nadal to see what more history he can make at an event that has created a tennis legend.