“It is one thing I love about the game over here, the really deep-seated rivalries with the hatred that comes with it.”

Kristian Woolf is speaking to The Sportsman on his 47th birthday, ahead of a game that the all-conquering St Helens head coach feels is the sport’s fiercest rivalry.

Champions Saints face Wigan on Saturday at Betfred Super League’s Magic Weekend, a festival of rugby league which sees an entire round of fixtures played over two days at Newcastle United’s St James’ Park. And top of the bill again is leaders Saints against the team just two points behind them – their closest challenger and bitterest enemy.

“It’s a rivalry that our players get really excited for,” says Woolf, whose back-to-back Grand Final wins in his two Super League seasons has made the intense Queenslander one of the most sought-after coaches in the club game.

“It is a respectful hatred, but it is certainly there from juniors right through to seniors. The players grow up with it, thrive with it, love it and enjoy it.

“We have a real bounce about our training sessions in derby week. It’s not a game I need to sell to our players.”

Arriving in Britain for the 2020 season, Woolf inherited a champion side and has polished it to create a dynasty. Saints swept the board in 2021, adding the Betfred Challenge Cup to the successful defence of their Super League title, before Wigan wrestled that iconic silver trophy back off them at Tottenham six weeks ago. Now it’s all eyes on that Super League prize.

Wigan’s ascent back towards their former glories has added extra spice to an already explosive rivalry, and the Saints boss believes rugby league needs both a strong Wigan and a strong St Helens, at the same time, to drive the sport forward.

“Having Saints and Wigan both at the top of the table just adds something special to the occasion and to the competition. It is two traditional heavyweights who have both been really successful. It makes an occasion like this a real occasion.”

And here-in lies the fun stuff.

Wigan are rebuilding impressively, their Challenge Cup Final victory over Huddersfield may have been pretty last-ditch – some may say fortuitous – but the trophy win represented not only a strong signal of intent but also a real marker of how far they have come already. Not least because they dismantled Saints in the semi-finals.

Yet speak to anyone at Wigan, and they will tell you that Saints remain the team that everyone else is chasing, and that Wigan are still way off. 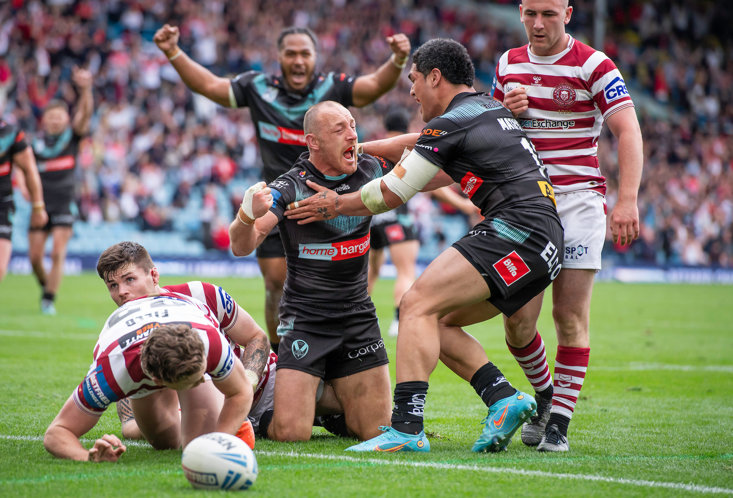 “We are under no illusions where we sit,” Warriors coach Matt Peet told me last month.

“It will take years before they are not the best team, I don’t think they will be worried about us.”

Peet’s assistant coach Lee Briers sings from that same hymn sheet – “they are the benchmark and we are the challengers,” he told The Sportsman earlier this season.

But repeat any of those quotes to Woolf and his Saints coaching staff and you will get either a wry smile, an eye roll or a chuckle.

Whether they choose to acknowledge it or not, Wigan are already a lot closer to St Helens than they are making out. A win at Magic Weekend would see them level on points. And Woolf knows that it is game on.

“I think they think they are a lot closer than what they are letting on as well,” he says with a nod.

“They have obviously played with a real confidence, did that when they beat us in the Challenge Cup and have done since then.

“It is a game that really excites our players as I’m sure it does the Wigan players. We will see the best of both teams, a really high intensity, high quality game and a real spectacle for those who turn out to watch.”

Saints’ hopes haven’t been helped by the loss to injury of their England winger Tommy Makinson – “he’s the best winger in the competition so we’re going to miss him” – nor the impending loss of their other winger Regan Grace to French rugby union side Racing 92 - “It is a blow and we worked extremely hard to make Regan stay”.

And Woolf appreciates that it is not just Saints and Wigan who are driving the British game forward this year.

Third-placed Catalans beat St Helens in Perpignan last week, and both they and Cup runners-up Huddersfield a point further back are breathing down the necks of the two old rivals.

“I think there is a definite top four,” Woolf adds. “It is a really competitive, high-level top four. I don’t know if there’s ever been a four as close as this four are right now. It is great for the competition. It is what we want an elite rugby league competition to be.”

It has the makings of an epic title race with any of the top four capable of conquering Old Trafford at the end of September.

An extra driving force for Woolf could well prove to be his own future, as he refuses to be drawn on growing talk of a move to Australia’s NRL when his contract expires at the end of the season. ”We will sort that out in the near future,” was his response when pressed on that again this week.

His eyes for now are on the not-so-noisy neighbours.

Wigan may want to keep it quiet, but they are snapping at Saints’ heels. And Magic Weekend may just serve up a classic.

St Helens are 8/15 to beat Wigan Warriors with Betfred*