Boxing
News
His promoter, Eddie Hearn, says that they now want to unify the division and then move up to heavyweight
Kieran Spratt
23:36, 20 Mar 2021

A British, European, Commonwealth and now world champion - it’s fair to say that Lawrence Okolie has come a long way from being the kid working at McDonalds who was lured into boxing after watching Anthony Joshua claim an Olympic gold.

‘The Sauce’ came through his toughest test as a professional to date with absolute ease, stopping Krzysztof Glowacki inside six rounds at the SSE Arena to claim the vacant WBO cruiserweight title and move to 16-0 (13).

From the opening round the man from Hackney set the tone for the fight, landing a straight right, Okolie’s money shot, after just 90 seconds and it gave the Pole a good impression of the sort of power the 28-year-old carries.

One of Okolie’s most valuable assets is his 82 1⁄2 inch reach and he used that with aplomb against Glowacki, who struggled throughout to get on the inside. It was exactly the sort of fight Okolie wanted and in the second round he landed some regular heavy body shots but Glowacki, now 31-3 and who’s only knockout defeat prior to tonight came at the hands of Mairis Briedis in 2019, remained strong.

In the fourth, Okolie managed to hurt Glowacki with a minute remaining in the round after two right hands found their mark, cutting his opponent just above the eye. It all came to a close in the sixth stanza when Okolie launched a vicious right hand down the middle that sent Glowacki crumbling to the canvas with no chance of getting back up. 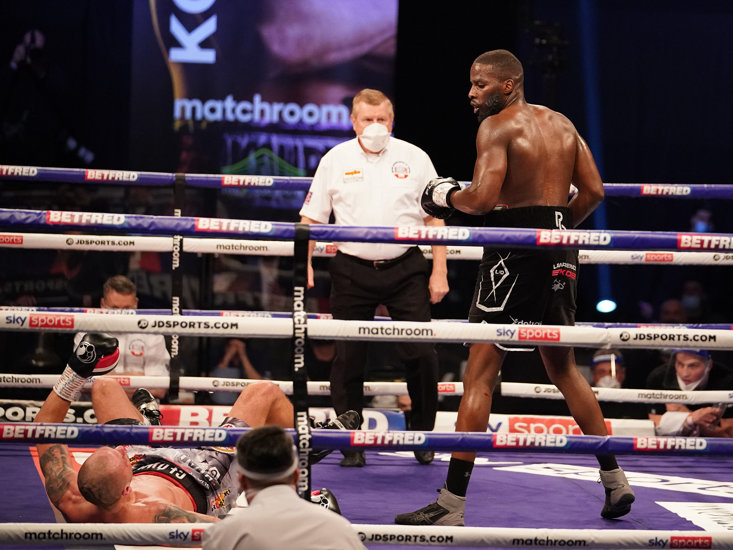 It was a punch-perfect performance from Okolie who controlled the fight, won every round and capped it off with a sensational one-punch KO.

Speaking after the fight Okolie said, "It went exactly to plan. I said I'd get it done between rounds five-eight.

"I knew he was struggling to catch up with me. So it was difficult for him to make the decision to get up."

His promoter, Eddie Hearn, believes that Okolie proved his doubters wrong tonight and says a move up to heavyweight could happen one day, "Glowacki was top five in the world. Okolie has had criticism but he's a novice. It was an absolute masterclass. That was good enough to beat any cruiserweight.

"We want to unify then move up to heavyweight.

"He has scary power but also has the knowledge."

Elsewhere on the card, Okolie’s fellow Rio 2016 Olympians Anthony Fowler and Joe Cordina were both victorious, too. Fowler stopped Jorge Fortea with a huge right hand in four rounds, while Cordina outclassed Faroukh Kourbanov with a majority decision to remain unbeaten.