Football
News
The top half of League One looks absolutely stacked this season
Simon Lillicrap
16:00, 27 Jul 2022

After the League Two predictions yesterday, it is time to get stuck into the third tier. With the likes of Portsmouth, Derby County and Sheffield Wednesday involved, this division has never looked so competitive.

I love Jimmy Floyd Hasselbaink but I think the Brewers are in for a rough season. They squad that finished in the bottom half last term hasn’t improved and the goodwill JFH carried seems to be evaporating. This League One relegation battle is impossible to call, but I’ll be surprised if Burton are clear of the bottom four come May.

Last season’s League Two play-off final winners enjoyed a stonking day in the sun at Wembley with that 3-0 win over Mansfield , but this term they could return to earth with a bump. I actually rate the duo of Darrell Clarke and Director of Football David Flitcroft but with a key injury to James Wilson, this squad doesn’t have the depth or quality in key areas to comfortably survive.

Michael Duff’s exit leaves Cheltenham in a sticky situation. His move to Barnsley means that Wade Elliott takes the ropes, in his inaugural first-team managerial job. Even though he worked closely with Duff - he has everything to prove . Will Boyle has jumped up to the Championship with Huddersfield and he leaves a big hole which they could struggle to fill. I'm not confident on Cheltenham's chances.

Another managerial exit and a summer exodus has sapped the positivity out of FGR. The League Two title winners have lost manager Rob Edwards to Watford, Kane Wilson joined Bristol City, Ebou Adams went to Cardiff and Nicky Cadden is now at Barnsley. Those exits have to be factored in and despite being a club that has consistently trended upwards, this could be a difficult season for Ian Burchall and co.

Never write Derek Adams’ Morecambe side off. Despite the small squad, tiny budget and all the odds being against them - they just seem to have what it takes to avoid the drop. Greg Leigh is a loss on the left but Caleb Watt’s seems like an exciting addition from first look. This is a club that fits its manager, and that should be enough to keep them up.

The Cod Army scrapped survival last term with a lowly 40 points, but they have made some decent additions that should improve them. Callum Morton is the major addition up front and Brendan Wiredu could be a gem. Scott Brown will garner a lot of attention in the dugout, but his lack of experience leaves question marks for Fleetwood.

Like Morecambe, when a club fits their manager, they seem to be able to consistently overachieve. They once again have one of the smallest budgets in the league but John Coleman has the ability to keep them up, having finished 12th last season. I think they’ve regressed slightly since then with the loss of Ross Sykes and Colby Bishop and the defence is a huge concern, but they should be safe for another year.

After a 17th place finish last term, the decision to bring in Mark Kennedy this summer is seen as somewhat of a risk. The rookie boss had that short stint at Macclesfield but still has a lot to prove, especially at this level. However, for a club that has enjoyed such soaring highs over the past decade, another season in League One with an emphasis on youth should leave them in a stronger place in 12 months time.

After an 18th place finish, the Shrews have made moves to improve in this transfer window. Tom Bayliss and Jordan Shipley both bring quality to the midfield, while the Coventry City links continue with the loan arrival of right-back Julien Dacosta. This should be another sensible season for Salop, who could overachieve if things fall into place.

A summer of near silence for Exeter has only seen them bring in goalkeeper Jamal Blackman, but that isn't necessarily a bad thing. The squad that were so good last season have stuck together, while Matt Taylor is a huge plus in charge of the group. With the signing of Blackman and potentially a few others, a top half finish could be on the cards.

Joey Barton’s are still riding on the crest of a wave that saw them steal automatic promotion on the final day with a 7-0 win over lowly Scunthorpe. But instead of seeing that result as fortuitous, Rovers were thoroughly deserving of their promotion, especially when you consider their sparkling form over the second half of the season. John Marquis has always scored goals at this level but has something to prove and Barton’s Rovers can continue their upward trajectory.

A strong defence gave Cambridge a strong campaign last term, which ended in a 14th place finish against the odds and there is no reason why a similar finish cannot be achieved this term under the stewardship of Mark Bonner. He’s proven himself to be an elite coach at this level while in Joe Ironside they have a complete forward that can score goals. Another exciting season awaits.

Let me make it clear that I think there is a clear and distinctive line between the bottom and top half of League One this year, and there is likely to be a clear gap between Charlton in 12th and Cambridge in 13th. But Ben Garner’s men don’t quite have the quality to challenge the big boys in the division and gatecrash the top six. They will play some of the sexiest football in the division and Garner is likely to get a tune out of Jack Payne - so I think they’ll be a top half team this time around.

Karl Robinson’s Yellows fell short of the play-offs last summer and have since lost Luke McNally to Burnley. Cameron Brannagan remains a top midfielder, Matty Taylor is a great goalscorer and Josh Murphy is an intriguing addition but as it stands there are clear gaps in the squad and a genuine lack of depth. It leaves me unconvinced that they’ve done enough to break the top six.

DERBY WHAT?! Hold onto your hats everybody. The current third favourites to win the league have been on a recruitment drive after finally getting their takeover done, with big names such as Conor Hourihane, James Collins and James Chester all joining the club for a promotion push. But Liam Rosenior is not Wayne Rooney, and these signings have so far been players past their best and on the decline. Hourihane aside, I’ve not been blown away by their business as some others have. With the strength of this division, I’m predicting they will miss out on the play-offs altogether.

Portsmouth consistently underwhelm in League One. They missed out on the play-offs last season and although the addition of Colby Bishop is a good one, him and Joe Piggott both clearly lack pace up top. They’ve also lost Marcus Harness as part of the Piggott deal, but Marlon Pack should be a good signing. If anyone can get a tune out of two physical strikers, it is Danny Cowley.

With Gareth Ainsworth signing a new contract, Wycombe aren’t going anywhere. Sam Vokes and Garath McCleary will continue to cause issues for opposition defences and having lost to Sunderland in the play-off final last term, they will be hoping to go one better this time around. But, this is an aging squad and I feel the division is stronger this time around, which is why I’m backing them to miss out on the top six.

Barnsley provide a collision of two forces as the consistently impressive Michael Duff comes in through the door to meet a Tykes team that were an utter embarrassment last campaign. They finished bottom of the Championship last term but hopes are high that Duff can get to work immediately and revamp the squad. For now, Callum Styles remains along with Mads Andersen and Michal Helik, but up front they are a little light and the signing of James Norwood doesn’t quite fit the bill for me. They should go close, but I think they’ll just miss out.

Ian Evatt’s Bolton can continue their climb and after a turbulent season last year that saw both woeful and spectacular runs of form, they finished ten points outside the top six. This time around, they will need to find some level of consistency. On their day they can beat anyone as they showed with a 6-0 win over Sunderland and the second half of the season, which saw them pick up 47 from 22, leaves me positive on their play-off ambitions this campaign.

When Ryan Lowe left Plymouth I’ll admit I was concerned for their immediate future. But Steven Schumacher’s side continued the feel-good factor and somehow missed out on a play-off spot having amassed a whopping 80 points. Bali Mumba and Mickel Miller should be sensible additions to a squad that wasn’t far off. Things are looking up for Argyle.

Another club that has recovered from a managerial departure. Liam Manning is my pick of managers in League One and has carried on the good work of Russell Martin, while director Liam Sweeting has helped lay the foundations for long-term success. Losing Scott Twine and Harry Darling in the same summer is far from ideal, but this is a club that is on the right track and could even crack the automatic promotion spots. Only the reliance on Twine last year has them outside the top two for me. 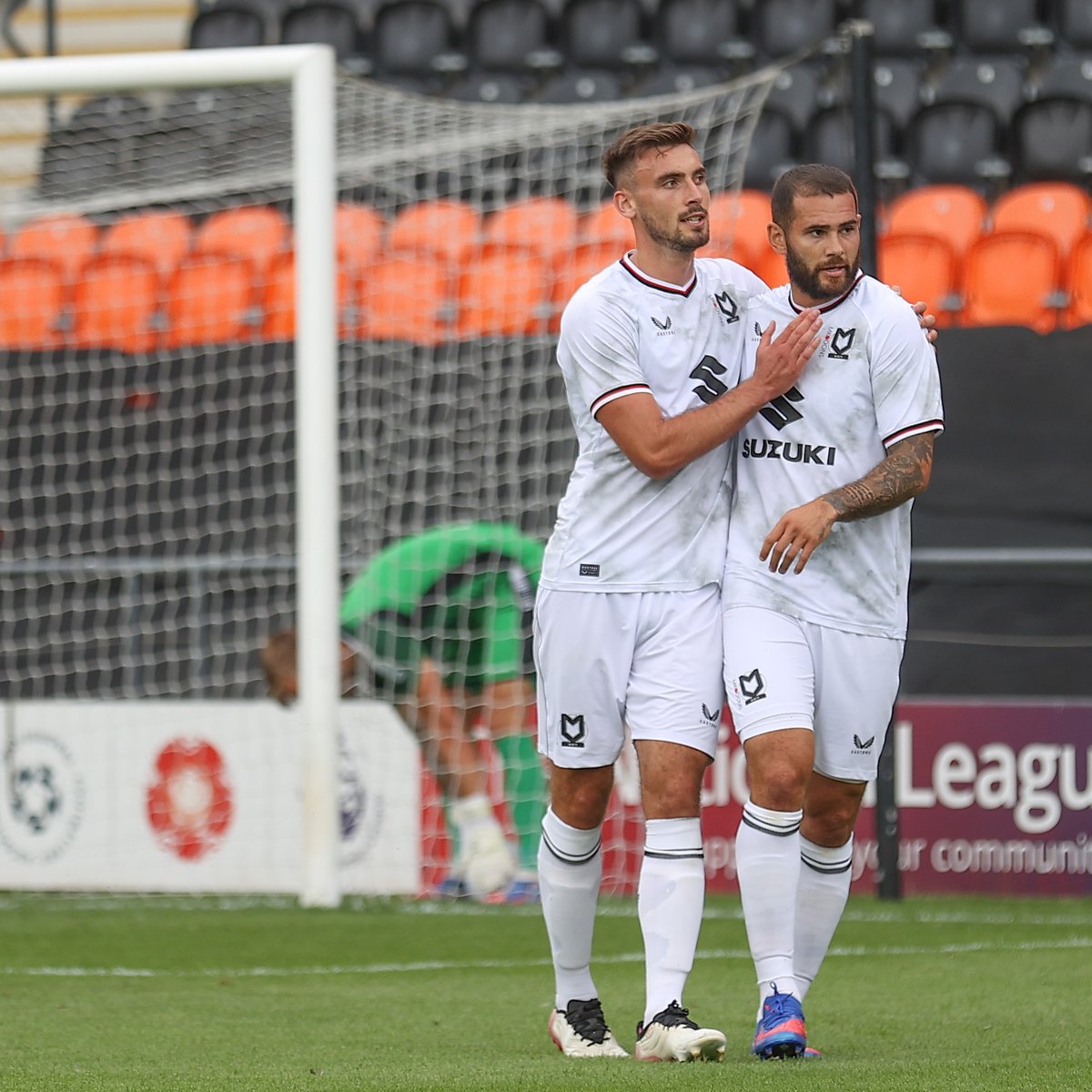 Grant McCann won this division with Hull City and you wouldn’t put it past him winning it again this time around. With Jonson Clarke-Harris, Kwame Poku and Ronnie Edwards can set this league alight and this is a club, under Darragh MacAnthony, who know how to get up from this level. I’d be shocked if they finished outside the top six.

Is it finally Ipswich’s year to get out of League One? I’ve been stung before but this time around, with Kieran McKenna at the helm, I’m confident. The Tractor Boys have conceded just 13 goals in 24 matches since the former Manchester United coach came in and that defensive solidity provides the perfect base for a promotion push. Add to the mix the Freddie Ladapo, Marcus Harness and Tyreece John-Jules, and there should now be enough goals to win games and fire this side into the top two. All aboard the Tractor Boys.

In my opinion, Wednesday boast the strongest squad in the division and last season, Darren Moore alleviated any previous concerns about his managerial ability with a strong fourth-placed finish. This squad now has a ridiculous amount of depth, especially in midfield where Will Vaulks, Tyreeq Bakinson, George Byers and Fisayo Dele-Bashiru will complement the outstanding Barry Bannan.

Meanwhile, the additions of the two Mikes from Rotherham - Ihiekwe and Smith, add physical power and promotion experience to an already stacked squad. I’m backing the Owls to win League One in 2022/23.