Living legend Amanda Serrano won a unanimous decision over Sarah Mahfoud at the Manchester Arena. ‘The Real Deal’ had a tougher night than many expected against the previously-undefeated Dane, who came on tremendously in the later rounds. This was Serrano’s first outing since her defeat to Katie Taylor in their instant classic at Madison Square Garden. Serrano can add Mahfoud’s IBF featherweight title to her WBC, WBO and The Ring crowns.

The first round saw Mahfoud boxing well off the back foot while the Puerto Rican icon looked wild with her shots. Serrano got her eye in in the second, displaying fast hands as she walked her foe down. The southpaw left straight was her go-to punch, creating openings for Serrano to get inside. An accidental clash of heads left the Dane with a cut which was fortunately towards the top of her head, keeping the blood out of her eyes.

Serrano began to work the body in the third session. Mahfoud tried to counter this by being more active but Serrano was landing the harder, cleaner shots. The fourth saw Serrano closing the distance, stalking her foe in the way we have seen here close down 45 previous opponents over a glorious career. There was no sign of miles on the clock as Serrano ripped in three and four punch combinations. Mahfoud tried to throw back but lacked the power to keep her opponent off her.

The Puerto Rican showed no signs of slowing as the fight edged towards to the halfway stage. Conversely, the fifth carried the first signs of Mahfoud beginning to breathe hard. She rebounded in the sixth as Serrano showed her first signs of reluctance. She had been fighting off the back foot, but Mahfoud stood her ground here and actually won the battle. 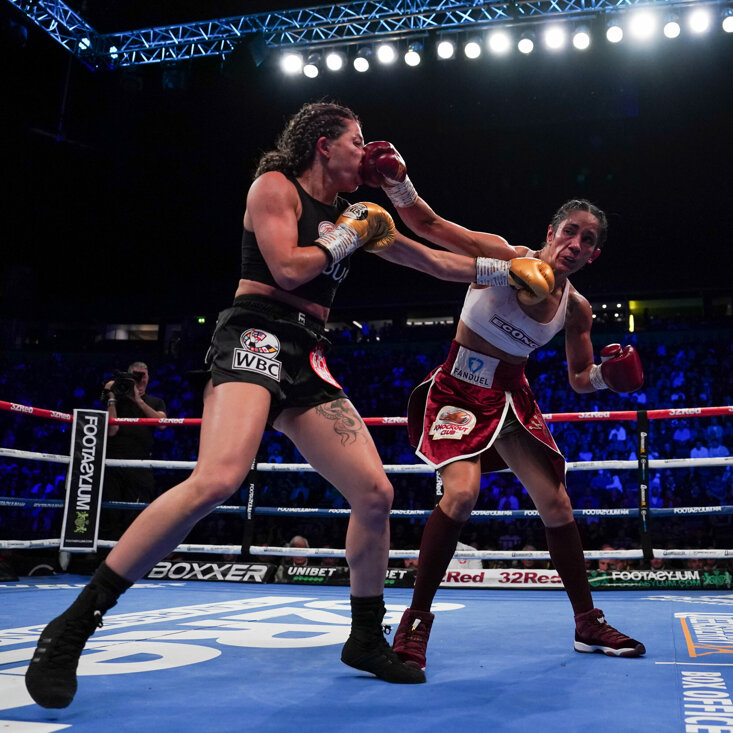 A big left hand and a thudding right hook characterised the seventh for Serrano as she world to reassert herself. But Mahfoud would not be quelled and she boxed her best rounds in the final two sessions. The ninth stanza saw her catch Serrano on the way in with intelligent hooks before unleashing some stinging combinations in the tenth. It was a grandstand finish but ultimately not enough. The scorecards of 99-92 and a pair of 97-93s were perhaps a little wide, But Serrano deservedly took home the unified championship.

Serrano turned her attention to an undisputed title clash with WBA champion Erika Cruz in the aftermath. That fight would sell, but not as well as a possible rematch with Katie Taylor. Serrano wants that two, and it is hard to argue with her assertion that an undisputed vs undisputed clash would be another historic occasion for the pair. But for now, Serrano can enjoy an impressive, but tricky, victory in her UK debut.