Championship greatness has unfolded before our eyes. Fulham’s Aleksandar Mitrovic has taken the record for most goals in a single season away from Brentford’s Ivan Toney after scoring from the spot in the Cottagers’ 2-1 victory over Peterborough United at Craven Cottage.

After a monumental individual campaign for the striker, there was never any doubt he would go on to smash the record and he quickly backed up his record-breaking 32nd goal with his 33rd later in the game. All bow for the Serbian king. Mitrovic has always been a formidable force in front of goal in the second tier and with the way his side have played this season it is not surprising that he has found the back of the net so many times.

Right from the beginning of his Fulham chapter, when he joined on loan from Newcastle United in 2018, it looked like the Championship was going to be his playground. In that loan spell the star striker scored 12 goals in 17 appearances before joining the club permanently that summer. Fulham achieved promotion to the Premier League after defeating Aston Villa in the play-off final, but they quickly returned to the Championship for the 2019-20 season - and it was as though Mitrovic never left. He quickly returned to his high-scoring levels which helped inspire a fruitful season for himself and the club as they regained promotion to the top-flight after another play-off final victory, this time over Brentford. Mitrovic was the joint-winner of the Golden Boot, along with the Bees’ Ollie Watkins with an impressive haul of 26.

OptaJoe
@OptaJoe
32 - Aleksandar Mitrovic has scored 32 goals in the EFL Championship this season, a new single-season record in the competition since the 2004-05 rebrand, and the most in the second tier since Guy Whittingham in 1992-93 (42). Flammable. 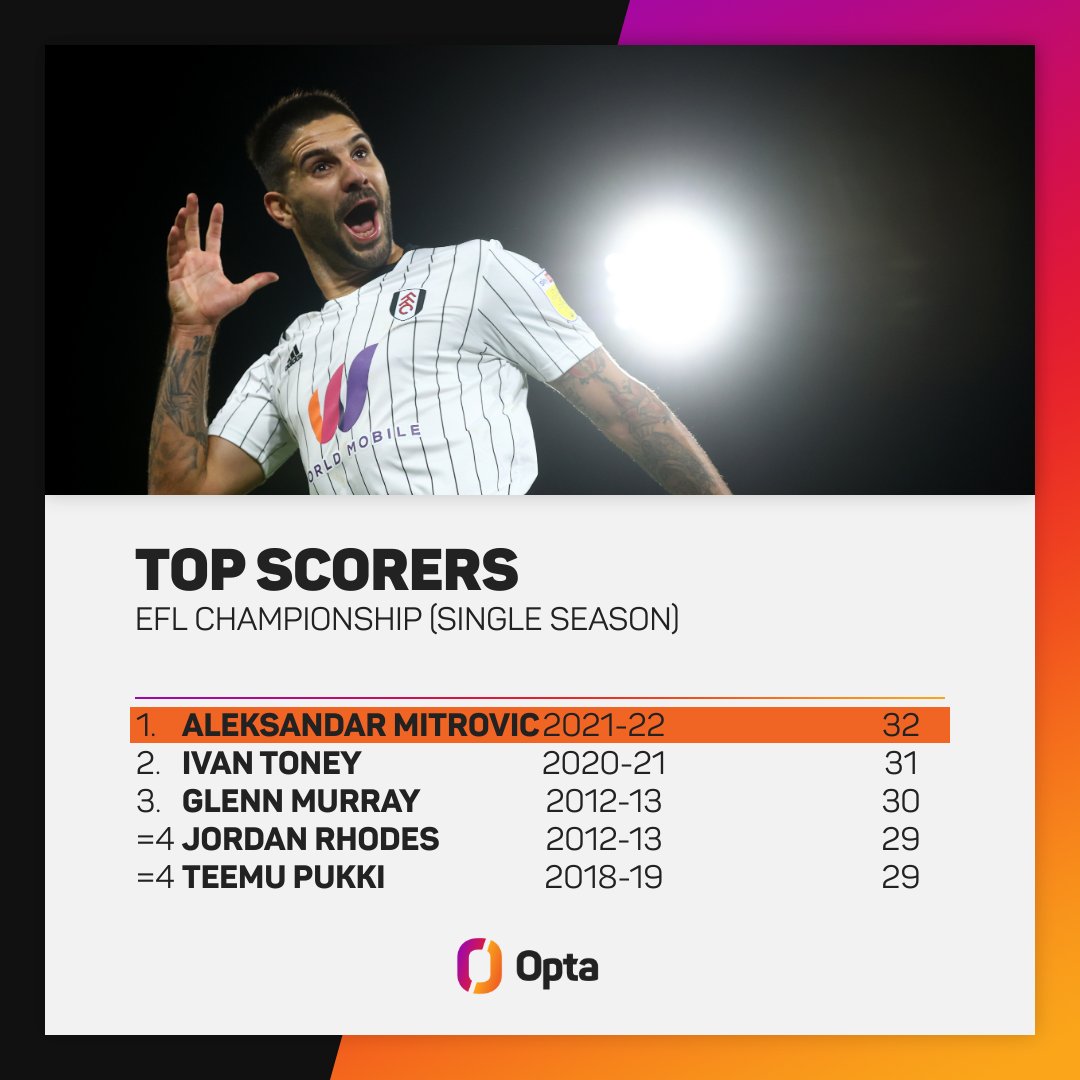 With this now being his second full season with the Cottagers in the Championship, his experiences in this division have transformed him to the most lethal marksman in the division - as 33 goals in 32 games, an average of a goal every 79 minutes, speaks for itself. His expected goals stat so far equates to 27, but he is six goals ahead of projections, highlighting the incredible form he has been in and how potent he is in front of goal. The Championship is unquestionably his arena as in 116 appearances for both Newcastle and Fulham, he has scored on 75 occasions, averaging 0.65 goals per game. The numbers surrounding his excellent exploits in this division are to be marvelled at. Fulham have fired in 81 goals this year, and Mitrovic’s individual efforts have equated to 40% of the total, which further signifies his importance in SW6 and how extraordinary this campaign has been for the superb Serbian.

The most staggering detail regarding this magnificent record is that the Championship is nowhere near complete. There are still 14 more league games for the Serbian international to continue with his free-scoring performances and make this record an extremely difficult one to eclipse. In those games left to play, Mitrovic faces a balance of sides in the race for the play-offs, as well as five teams currently in the bottom half of the table - with games against two of the bottom three sides in Derby County and Barnsley to come.

With his confidence on cloud nine, there is truly no side in this division who Mitrovic will be fazed about facing as he has a chance to make this record significantly more difficult to break. The 27-year-old will be relishing this challenge for the final few months of the season, not that he needs motivating. While Fulham are in the driver’s seat to win the league title and secure their return to the Premier League, they still have some work to do until it is confirmed and Mitrovic will look to help his side book an early promotion party. Judging by how Mitrovic and his team-mates have set the Championship alight this term, that party looks like it could be booked within a matter of weeks.