"I knew without a doubt I would become a fighter - I knew that the underdog can, and often does, win."

When James ‘Buster’ Douglas stunned Mike Tyson in Tokyo almost 30 years ago, the impact of the infamous heavyweight classic was felt almost worldwide and just under 2,000 miles away from the Japanese capital, the fight’s shocking outcome had just influenced a future boxing great to commit his life to the ring - the story of Manny Pacquiao was just about to begin.

It’s crazy to think that had a 42/1 underdog in Douglas not stopped the seemingly invincible Tyson on that cool February night, the young man from the Phillipines might never have pursued a career in boxing, and we could have been robbed of one of the sport’s greatest students.

Born in Kibawe in 1978 into immense poverty, Pacquiao and his family were so poor they’d often be unable to even afford basic provisions such as rice. Living with his parents, two brothers and sister in a tiny single-room shack, the future world champion, who would go on to generate approximately 19.6 million in pay-per-view buys and $1.2 billion in revenue, wouldn’t even lay his eyes on a TV set until he was ten.

The hunger became so unbearable for the Pacquiao family that at one point his father was forced to kill their pet dog for food.

When Pacquiao began to box seriously, he made the decision to drop out of school and move in with his uncle Sardo Mejia in a one-storey home in the southern Philippine city of General Santos. Mejia, a boxing fanatic, would become Manny’s first trainer and introduction into the world of prizefighting.

Pacquiao later wrote in his autobiography: "Even though he had no formal training, we both took it seriously and knew that we were going to be champions one day."

By 15 he was regarded as one of the best junior boxers in the country and often fought from an open-air park in General Santos, taking on anyone who dared face him and beating all with relative ease.

Seeking bigger challenges, the young fighter stowed away on a boat to the nation’s capital, Manila, where he would sleep on the streets or inside a gym’s boxing ring as he continued to put all his focus on his training.

The hard work and sacrifice would pay off and a year later, Pacquiao turned professional and the rest, as they say, is history. 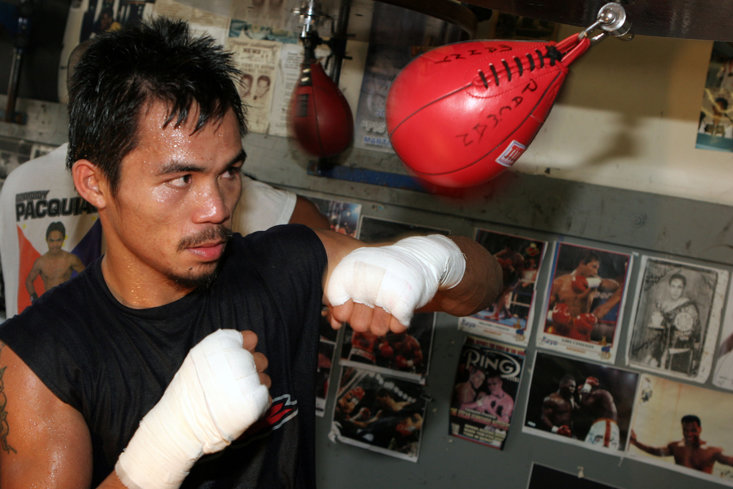 Even at 40, Pacquiao still remains at the top of the sport (PA Images)

Now 40 and with a promising career in politics on the cards, the Pac-Man still doesn’t look like slowing down and with a win over one of the world’s best welterweights in Thurman last weekend, you’d be foolish not to expect more twists and turns before the legendary fighter hangs up his gloves for good.

Until then, Pacquiao’s rags-to-riches story continues to inspire millions around the globe, especially in his native Philippines, and his tale will no doubt encourage waves of future fighters for generations to come. There’ll never be another Manny Pacquiao.