In an ideal world, we would be celebrating the tenth, maybe even eleventh anniversary of Floyd Mayweather Jr’s illustrious meeting with Manny Pacquiao this weekend.

Alas, any chance of getting two of the finest pugilists of the modern era to lace up their gloves and go toe-to-toe with one another while still in their respective primes proved too hard to materialise for a multitude of reasons, ranging from purse splits to drug-testing.

The fight had been mooted as early as 2009 and even then was considered to have the potential to become the highest-grossing fight in the history of prizefighting. Ultimately it was merely the start of a long dance between two supremely talented boxers that would culminate in the most lacklustre superfight of all-time.

It was meant to be our generation’s Muhammad Ali vs Joe Frazier and was even billed as such, sharing the title of the first fight between the two heavyweight greats, ‘The Fight of the Century.’ A much loftier title than it deserved in hindsight, as the bout turned out to be more Lennox Lewis vs Mike Tyson than Ali vs Frazier; Sky-high expectation with very little in the way of delivery. 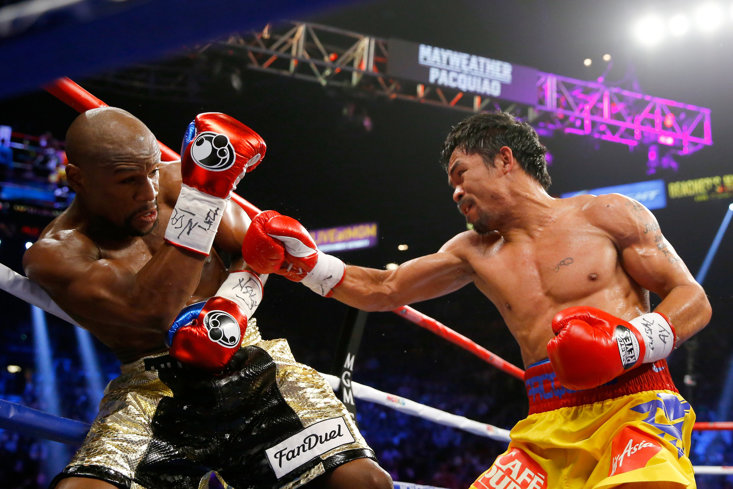 The fight, which took place at Las Vegas’ MGM Grand on May 2, 2015, was finally set up thanks to a chance encounter between the two fighters courtside at an NBA game between Miami Heat and the Milwaukee Bucks. Mayweather’s WBA and WBC welterweight titles and Pacquiao’s WBO belt would be put on the line.

On top of that, the WBC announced that the winner of the fight would receive a diamond and emerald-encrusted belt worth $1M, whilst the WBA announced the winner would be awarded the "Man of Triumph" trophy and a gold-plated "super" champion belt - the fight might have been ultimately mundane but it sure as hell had some glitz about it.

During the fight’s opening round, onlookers could have been forgiven for believing the fight might actually live up to the hype, with Mayweather beginning at an unusually aggressive pace - normally reserving the opening stanzas to see what his opponent’s all about.

Pacquiao tried to fire back with body shots but Mayweather, one of the slickest counter punchers in the game had little trouble fending him off and sealed the first round with relative ease. It would pave the way for the rest of the night.

In the ring, Mayweather outboxed and outmanoeuvred Pacquiao for twelve rounds. Pacquiao’s most die-hard fans still try to paint Mayweather as a chicken that ran from his Filipino aggressor for the entirety of the bout - in truth, Mayweather fought out a punch perfect plan - “Hit and don’t get hit,” as people always say and there aren’t many better proponents of that than the self-proclaimed ‘Best-Ever’ from Grand Rapids, Michigan. 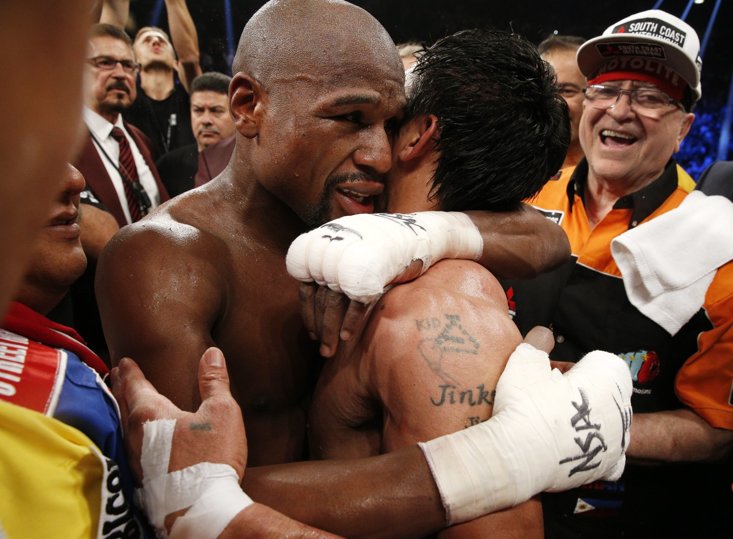 Though the fight was overwhelmingly considered a bit of a bore, the numbers it generated are still stratospheric to this day. The fight absolutely decimated any all-time records for PPV buys, revenue and live gate. An eye-watering $72M was made from ticket sales alone at the MGM, whilst more than $437M was taken from 4.6M PPV buys - completely dwarfing the previous record of $2.48M set by Mayweather and Oscar De La Hoya’s tussle in 2007.

With Vegas superfights comes the usual crop of A-listers getting in on the action at ringside screaming “Look at me, I’m cool, I like boxing too.” Mayweather vs Pacquiao was no different and everyone from Andre Agassi to Mark Wahlberg, Clint Eastwood to Nicki Minaj were in attendance. Pacquiao was joined on his ring walk by US talk show host Jimmy Fallon, Mayweather by Justin Bieber and the Burger King mascot (No, seriously).

Five years on and it’s clear that the fistic spectacle that could have been sadly never even came close to living up to its grand potential but we may never see an event of this magnitude and sheer size anytime soon (Nobody wants a sequel between these two, let’s face it).

Nobody could stop the world like Manny Pacquiao and Floyd Mayweather did in 2015 - even if it did happen far later than planned.