Boxing
News
Fury and Ngannou are the leading combatants in their respective disciplines, so why does a fight between them feel so hollow?
Joey Mills
13:45, 01 Jun 2022

The topic of UFC heavyweight champion Francis Ngannou’s proposed exhibition fight with WBC, lineal and The Ring heavyweight champion Tyson Fury has been raised again. A few weeks ago, Ngannou said he was “70%” sure the bout would take place. Fury touched upon it alongside the UFC star in the aftermath of his win over Dillian Whyte at Wembley Stadium. Now Britain’s UFC heavyweight hope Tom Aspinall has talked up the bout in an interview with The MMA Hour.

“Who doesn’t want to see that?” offered Aspinall, who has a 2017 pro boxing victory on his record. While UFC President Dana White has previously derided an Ngannou-Fury exhibition as a “waste of time, energy, and money”, Aspinall is more supportive. Intriguingly, the heavyweight contender also said that the fight is “closer than people might think.”

So what would this “fight”, if one can term an exhibition as such, mean for the fighters involved. In terms of their legacies, it would mean bugger all. If the bout was an exhibition of the scored rather than unscored variety, someone would take a nominal win. But without the pair even facing off, it is clear who would win.

If the fight was contested under boxing rules then Fury, a fighter that world class, experienced heavyweights have not been able to defeat, would rigorously school Ngannou in a way not seen since the cane was banned from the classroom. If any sort of martial arts modifications were made to the ruleset, Ngannou’s improving wrestling and experience in expecting attacks from all angles would render Fury helpless.

This is the core issue with these boxing vs MMA matches; nothing is solved. Two men from different sports meet and almost inevitably, the man whose sport is being played is victorious. Floyd Mayweather demonstrated this by beating Conor McGregor in a boxing ring. Randy Couture showed the reverse is true when mauling the great James Toney inside the UFC Octagon. As a sporting contest or exhibition, Fury-Ngannou is obsolete. But it must be said, the motivation behind such a clash is not sporting achievement. 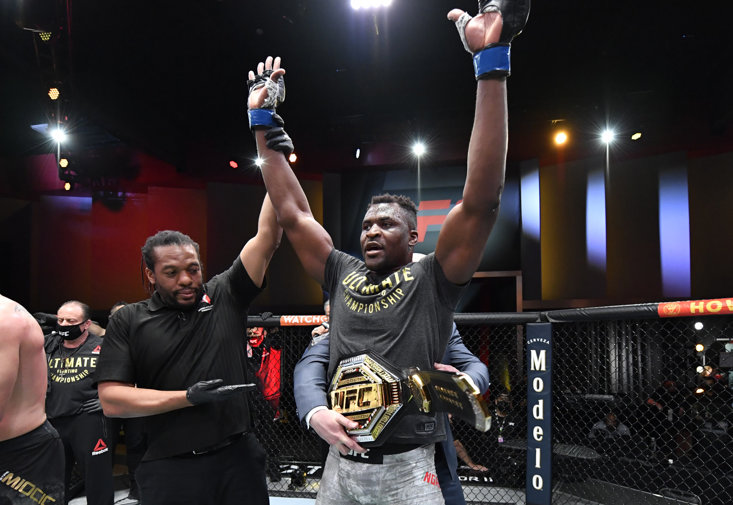 As always in the murky world of combat sports, money rather than competitive integrity is the name of the game. Luminaries like Mayweather, the Paul brothers and the entire Triller operation have shown people will pay money to watch exhibition fights that offer zero real-world implications. Often these aimless matches don’t even have a winner and a loser. But even when a decision is rendered it is swiftly forgotten. The importance is the way the tills ring, rather than anything that happens in the boxing ring.

Fury and Ngannou would sell pay-per-views. That simple fact makes the fight highly likely to take place. The only obstacle appears to be Fury’s continued participation in boxing. Ngannou has publicly stated he is willing to park his MMA ambitions and pursue this avenue, but Fury’s next step has been less clear. ‘The Gyspy King’ claims that his boxing retirement is genuine, but he is yet to vacate his WBC heavyweight title. Rumours have emerged that Fury is waiting to see what happens in WBA, IBF and WBO champion Oleksandr Usyk’s rematch with Anthony Joshua before possibly pursuing an undisputed title fight. With Fury’s pugilistic career not as definitively concluded as it initially seemed, the Ngannou match might have to wait.

As stated, money talks in boxing. Whether it arrives now or after further boxing and UFC exertions for the pair, this bout will likely remain a box office attraction for some time yet. But for a meeting of two of the biggest names in combat sport, the leaders in their respective fields, it feels strangely hollow. Ultimately, unless one man can pull off the upset in the other man’s sport, nothing will really have been solved. This is a sporting contest where the real winner is just the fighter’s bank accounts.