Spain experienced penalty heartbreak for the third consecutive major tournament as Moroccan goalkeeper Yassine Bounou became the hero after a hard-fought goalless draw. He saved two penalties as Spain missed all three but it had to be Achraf Hakimi, born in Madrid, who scored the winning penalty with a cheeky Panenka that broke Spanish hearts.

That success takes Morocco into the World Cup quarter-finals for the very first time, and they were backed by a huge crowd that cheered every defensive action. It was a tense game with few chances between two sides, but Morocco defended resolutely across 120 minutes to take Spain all the way to a penalty shootout. Then Moroccan whistles deafened the Spaniards as Pablo Sarabia, who hit the post with the last chance in extra-time, hit the woodwork again with Spain’s first penalty.

Hakim Ziyech converted his effort and then Carlos Soler saw his weak effort saved to put Morocco 2-0 up in the shootout. Unai Simon then saved Badr Benoun’s penalty before Sergio Busquets saw his shot remarkably saved by Bounou to give Hakimi match point.

Then, the PSG defender, born in the Spanish capital, sent the majority of the Education City Stadium, desperate for Morocco to win, into party mode. For Spain, it is more penalty devastation, having lost to Italy in the semi-finals of Euro 2020, and Russia in the last 16 in 2018 by the same method.

The Sportsman
@TheSportsman
PANENKA TO WIN IT. 🤩
That was special. 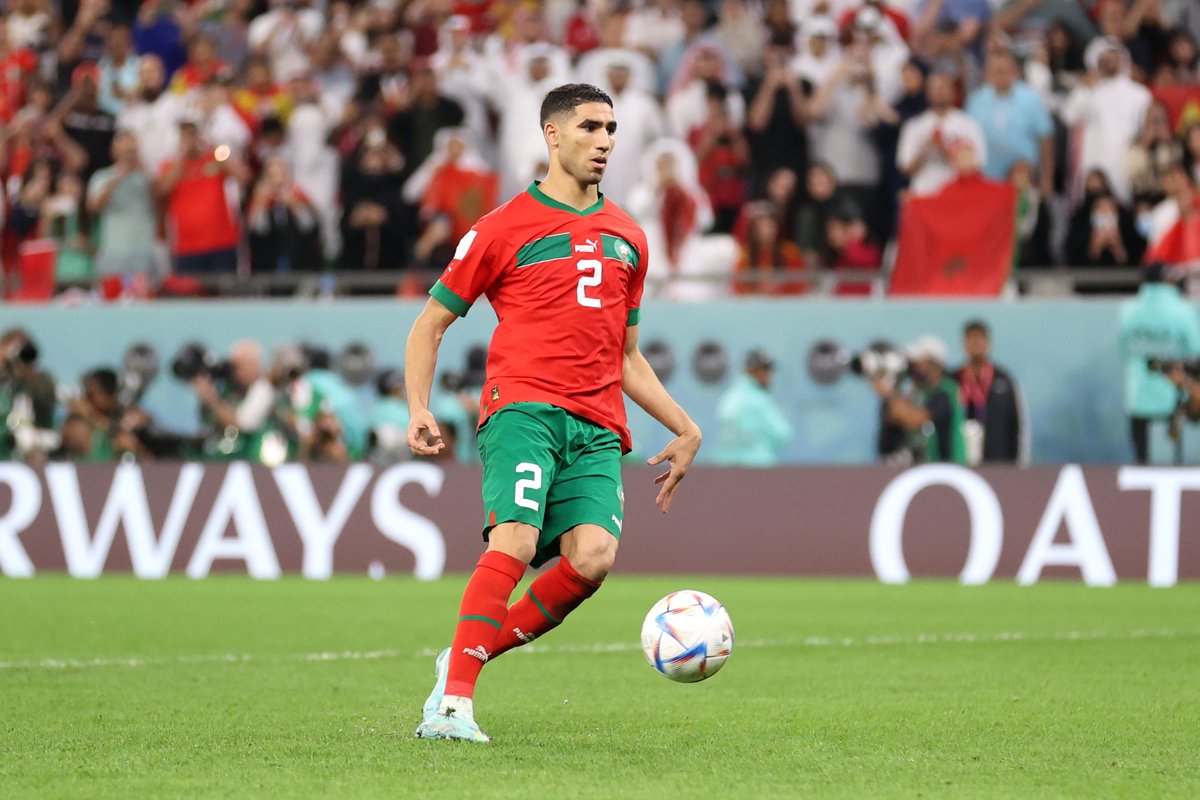 Even manager Luis Enrique’s promise that Spain had taken 1000 penalties to prepare for this one just wasn’t enough. His side, as with their previous two exits, should have won this game in normal time.

They dominated the ball as Walid Regragui’s side attempted to strike on the break. Every time they got the ball the crowd turned the decibels up as the north Africans delivered one of the best atmospheres of the tournament.

Hakimi whipped a free-kick just over the bar before Morocco showed great composure to play out from the back through keeper Bounou. Sodfiane Boufal skinned Marcos Llorente with a wonderful feint but his cross came to nothing, but in the opening moments it was Morocco who were able to impose themselves on the tie. However they were nearly caught out passing out from the back, as the offside flag combined with some desperate defending kept the ball out of the net. It was high risk, high reward stuff from Morocco, but boy it made for an intriguing contest.

Noussair Mazraoui won the ball back high up the pitch and unleashed a long range effort before more Spanish possession was met with deafening whistles. Ferran Torres was causing issues from the right and Gavi - the youngest player to start a World Cup knockout match since Pele in 1958 - was superb as usual on the ball, but Morocco defended resolutely and had a chance of their own before half-time.

Boufal shimmied past another defender and crossed the ball into Nayef Aguerd, who headed over when unmarked. They went in at the break level, with nothing between the two sides.

The Sportsman
@TheSportsman
WHAT A PENALTY TO WIN IT!
Morocco are through. 🇲🇦

Just after the hour mark, Alvaro Morata was introduced, having been so efficient with three goals in 126 group stage minutes for his country, but he didn’t have the desired impact either.

Spain utterly dominated the ball for the majority of the second period, as Morocco sat in their defensive shape and posed a puzzle that Luis Enrique simply could not solve. Morocco had a huge chance moments into extra-time when Walid Cheddira raced through but took too long to get his shot away and was swallowed up by the Spanish defence. Cheddira also wasted the biggest chance of the match as he was fed the ball in the box, but could only place his left-footed shot at the legs of Simon.

In the end though, it was decided by the spot, and it could mark the end of the road for Luis Enrique. Spain have now won only two of ten major tournament matches under Luis Enrique in 90 minutes - against Slovakia and Costa Rica and that simply isn’t good enough for a nation of their stature.

For Morocco though, the party moves onto the last eight. Portugal or Switzerland await, and who would back against them pulling off yet another shock?