Anthony Joshua will not be the only British world champion stepping into the ring at the Tottenham Hotspur Stadium on Saturday night. WBO cruiserweight king Lawrence Okolie will be making the first defence of his crown against unbeaten Montenegrin Dilan Prasovic. When ‘The Sauce’ beat Krzysztof Glowacki for the vacant title in March, he became the seventh British fighter to capture a world cruiserweight championship. Here is a look at this country’s other top 200-pounders.

‘Gentleman’ Glenn went on a run of four losses in a row in 1986. Three years later, he would lift the IBF cruiserweight championship. The resurgent County Durham fighter put together a run of eleven wins after that barren spell, before outpointing Patrick Lumumba to claim the vacant championship.

McCrory would retain his title with an eleventh-round knockout over Siza Makathini, before dropping it to Jeff Lampkin via a third-round stoppage. Glenn moved up to heavyweight and unsuccessfully challenged then-British and European champion Lennox Lewis. Two years later, back down at cruiserweight, he would attempt to win back his old IBF belt, losing a decision to Alfred Cole.

In 1995, ‘The Cat’ had been stopped in the eleventh round of a WBO cruiserweight title tilt against Ralf Rocchigiani. Two years later he would have his revenge, winning a split decision over the same opponent to finally win the championship he had been denied. Thompson’s two defences sent shockwaves through British boxing, as he twice defeated the legendary Chris Eubank, who was looking to win a world title at a third weight.

Thompson would come unstuck against the next name on this list, but returned to prominence in 2004 when he taught a young David Haye a valuable lesson, knocking the future king out in the fifth round.

Nelson lost the first three fights of his career, and nobody at that stage expected they were watching a future record-breaking world champion. 13 years after his debut, he stepped into the ring with WBO champion Carl Thompson with a record of 31-12-1. Against all the odds he emerged as one of history’s unlikeliest world champions, stopping Thompson in the fifth round.

The Sheffield fighter would enjoy an extraordinary title reign, holding the joint-record for the most cruiserweight title defences with fourteen, as well as the record for defending the belt against the most different fighters with thirteen. Nelson retired in 2006, having not fought for ten months due to a knee injury. 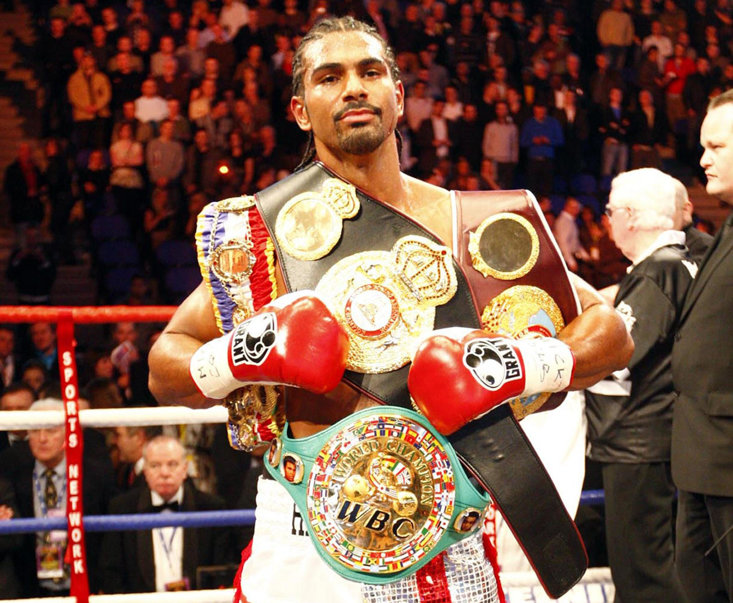 After the chastening loss to Carl Thompson, boxing’s schadenfreude enthusiasts were cackling over the heavily-hyped young fighter crashing back down to Earth. Haye responded brilliantly, redoubling his efforts to improve his conditioning, while cutting a swathe through the division.

Haye annexed the European championship on the way to a world title shot against WBA, WBC and The Ring champion Jean-Marc Mormeck. ‘Hayemaker’ had to climb off the canvas in Paris, before stopping the champion in the seventh round of a thrilling fight. In his next fight, he would unify his titles with the WBO strap belonging to the next man on this list, before moving to heavyweight. David would capture the WBA heavyweight championship, making him the only British cruiserweight world title holder to win a world championship at another weight.

Part of the illustrious stable that made world champions out of Joe Calzaghe and Gavin Rees, the Welshman won the WBO interim title against Marcelo Fabian Dominguez. Enzo was upgraded to full championship status when Johnny Nelson pulled out of their scheduled title fight due to injury.

Maccarinelli racked up four defences of the championship, most impressively scoring a decision win over former champion Wayne Braithwaite, before agreeing to meet Haye in a British dream fight. In a bout that every observer knew was not going the distance given the power each man carried, Enzo was blasted out in the second round by ‘Hayemaker’.

‘Big Mac’ would never again claim world championship honours, though he did score a fourth-round knockout of the legendary but badly faded Roy Jones Jr in 2015.

Liverpool’s ‘Bomber’ had fallen twice in light heavyweight title shots before moving to cruiserweight. The lifelong Everton fan racked up six victories in the higher division before challenging Ilunga Makabu for the vacant WBC crown. Bellew bombed out his opponent in three rounds, before doing the same to BJ Flores in his first title defence.

Bellew vacated the title and moved up to heavyweight, twice stopping former two-weight king David Haye. In his final fight before retirement, Tony returned to cruiserweight and challenged undisputed champion Oleksandr Usyk. Bellew’s brave challenge ended in the eighth round, and he now works as a pundit for DAZN.

x
Suggested Searches:
Manchester United
Liverpool
Manchester City
Marcus Rashford
Premier League
More
boxing
Weekend's Boxing Provides A Fight Of The Year And Upset Of The...
An Upset of the Year contender, a Fight of the Year contender and a big night in Newcastle for British [ ... ]
boxing
On This Day In 1987: Tyson Brings The 15-Round Era To A Brutal...
On this day in 1987, boxing changed forever, as the last ever 15-round world heavyweight title fight [ ... ]
boxing
Brawl On The Tyne: Fury, Marshall And Chris Eubank Jr Descend...
Unbeaten Savannah Marshall makes the second defence of her WBO middleweight championship this Saturday [ ... ]
boxing
Mixed Week For The Eubanks: Five Boxing Stories You Might Have...
Boxing never sleeps, and with Fury-Wilder III in the rearview, attention has turned to exciting fights [ ... ]
boxing
Haye At 41: The World Title Wins That Defined ‘The Hayemaker’
Former two-weight world champion David Haye turns 41 today. ‘The Hayemaker’ is unfairly [ ... ]
boxing
''You Big, Stiff Idiot!'': The Wit And Wisdom Of Tyson Fury
Not content with being the most able heavyweight fighter on the planet, Tyson Fury is also a supreme [ ... ]
boxing
The King’s Gambit: Who Should Tyson Fury Fight Next?
‘The Gypsy King’ has the world at his feet after solidifying his claim to the throne with [ ... ]
boxing
Retirement Or Fight His Way Back: What Happens Now To Deontay...
Deontay Wilder’s stock amongst the boxing community managed to both rise and fall on a damaging [ ... ]
boxing
Tyson Fury Retains Heavyweight Titles In Incredible Trilogy...
The first fight was a resurrection. The second was a demolition. Tonight, Tyson Fury’s 11th-round [ ... ]
boxing
LIVE Tyson Fury v Deontay Wilder 3
Morning all! What are you doing up at this time? It's Tyson Fury v Deontay Wilder. Again! The WBC [ ... ]
boxing
Merseyside Derby: Experienced Smith Awaits For Hungry Fowler
Liam Smith takes on Anthony Fowler this Saturday in a battle for Liverpool supremacy. The former world [ ... ]
boxing
Whyte Lined Up For Fury/Wilder Winner, Five Boxing Stories You...
Ahead of a blockbuster weekend in boxing in the ring, it’s been a pretty busy week out of it. [ ... ]
boxing
The Man Who Beat The Man: Tyson Fury On The Lineal Championship
When Tyson Fury walks to the ring to face Deontay Wilder on Saturday night, he will have two belts in [ ... ]
boxing
Fury vs Wilder III Undercard Preview: Heavyweight Heaven In...
It’s heavyweight heaven this weekend in Las Vegas as not only will fight fans be treated to Tyson [ ... ]
boxing
“I Look At Deontay Wilder Like He’s Stupid” - The Tyson Fury...
“Boxing is not rocket science. It’s me going in there, punching a man's face in. That's [ ... ]
boxing
Happy Birthday, Micky Ward: Remembering The Gatti War That Launched...
The word warrior is thrown around so readily in boxing, it has lost some of its impact. While every [ ... ]
boxing
Liam Smith vs Anthony Fowler: Everything You Need To Know
There’s a monster match-up on Merseyside this weekend when Liam Smith and Anthony Fowler go head-to-head [ ... ]
boxing
On This Day In 1998: Floyd Mayweather Wins First Ever World...
“We believe in our heart of hearts that Floyd Mayweather is the successor in a line that starts [ ... ]
boxing
Undercard? When? How To Watch? Everything You Need To Know About...
Tyson Fury and Deontay Wilder go head-to head for a third time next weekend, with The Gypsy King’s [ ... ]
boxing
UK First Choice For AJ Vs Usyk Rematch, Five Boxing Stories...
There’s news on where Anthony Joshua’s rematch with Oleksandr Usyk could land, a modern [ ... ]
boxing
Rebuild And Reclaim: Why Anthony Joshua Needs A New Trainer
Anthony Joshua looked bereft of ideas as Oleksandr Usyk boxed, moved and pounded his way to a unanimous [ ... ]
boxing
My Name Is Prince: 26 Years Since Naseem Hamed Won His First...
26 years ago today, a Prince was crowned king. ‘Prince’ Naseem Hamed stopped Wales’ [ ... ]
boxing
Eubank Statement: Junior Can Be The Face Of Sky Sports Boxing
Chris Eubank Jr takes to the ring this weekend as the new crown jewel of Sky Sports’ boxing coverage. [ ... ]
boxing
Keep Moving Forward: How ‘AJ’ Can Learn From Lennox The Avenger
Anthony Joshua, the dethroned three-belt king of the heavyweight division, sat stoically in the post-fight [ ... ]
boxing
Oleksandr Usyk Puts In Boxing Clinic Against AJ To Take Heavyweight...
You’d be forgiven if you’re starting to grow a little weary of hearing ‘Sweet Caroline’ [ ... ]
boxing
Okolie Cruises To Victory In First World Title Defence On AJ...
The first defence of Lawrence Okolie’s WBO cruiserweight crown ended swiftly on the undercard [ ... ]
boxing
The Rebuild Begins For Callum Smith As He Steps Up To Light...
Callum Smith was the best super middleweight in the world. The Liverpool fighter was the latest outstanding [ ... ]
boxing
Anthony Joshua Weighs In 19lbs Heavier Than Usyk Ahead Of Heavyweight...
Anthony Joshua has weighed in at 240lbs ahead of his heavyweight showdown with Oleksandr Usyk this weekend, [ ... ]
boxing
Anthony Joshua vs Oleksandr Usyk Is Fight Of The Year, Says...
Ahead of Oleksandr Usyk’s heavyweight showdown with Anthony Joshua at the Tottenham Hotspur Stadium, [ ... ]
boxing
From Mike Tyson To Mr. Dream, How Punch-Out!! Defined Boxing...
Only 55 men truly know what it is like to face ‘Iron’ Mike Tyson. But a generation of gamers [ ... ]