You’d be forgiven if you’re starting to grow a little weary of hearing ‘Sweet Caroline’ being belted out this year, but at the Tottenham Hotspur Stadium on Saturday night, in front of 60,000 boisterous fight fans, even the most ardent of Neil Diamond detractors would have found it hard not to get goosebumps in the build-up to this battle between two-time heavyweight champion and former undisputed cruiserweight champion.

Though it wasn’t the all-British showdown with Tyson Fury many had hoped for, the feeling that something special might unfold when Anthony Joshua and Oleksandr Usyk took to the ring was palpable. And boy, we were certainly not left disappointed.

In an absolutely spellbinding encounter in London, Usyk seized Joshua’s IBF, WBA, and WBO belts after outboxing and outclassing the Brit over twelve rounds in a magnificent display, earning a unanimous decision win on the judge’s scorecards.

The fight started as a chess match, with both men exchanging jabs and feinting often, trying to lure the other into early mistakes. A lot had been made about size ahead of the bout, but in the opening rounds, Usyk gave as good as he got and his left was looking particularly feisty, continually causing problems. None more so than at the end of the third, when the Ukrainian shook him with a huge left that had the Watford fighter seriously hurt.

Joshua started to turn the screw after that early scare, and his heavyweight power started to cause the smaller man problems. A crunching body shot in the fifth earned a huge roar from the crowd, while in the sixth another monster right ostensibly gave Usyk cause for concern.

Although Joshua’s size advantage looked like it was starting to make an impact, Usyk weathered the storm and began to take the fight by the scruff of the neck. ‘The Cat’ boxed beautifully, prodding away with his jab impeccably, and threatened to run away with the fight in the latter stages. His movement was giving Joshua fits. 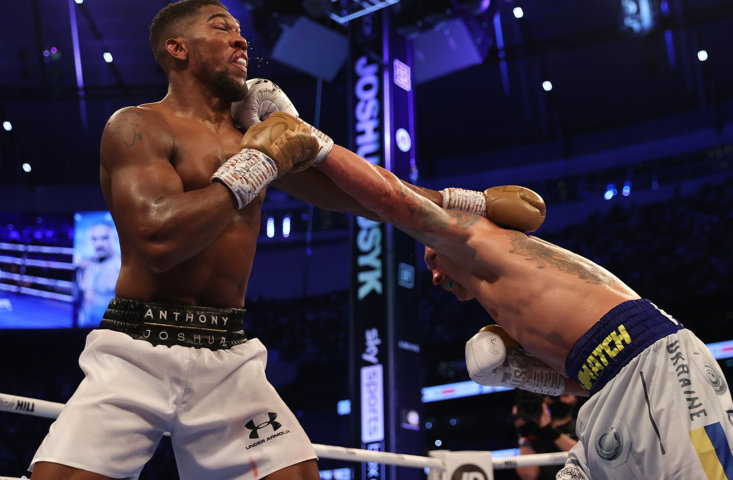 AJ needed something dramatic, but Usyk has never been stopped or put on the canvas in his professional career so far and the home fighter, whose tank was on the verge of depletion and had suffered a nasty swelling over his right eye, never really looked like he would change that stat. In the final seconds of the twelfth and final round, Usyk was on the verge of stopping Joshua but he was able to stick it out until the bell.

Usyk, who broke into tears when his arms were raised, put in a boxing clinic tonight, staking his claim as boxing’s pound-for-pound champion and it’ll likely go down as one of the most memorable heavyweight fights in recent history. Speaking to Sky Sports after the fight, Usyk said, “This means a lot to me. The fight went exactly the way I expected it to go.

"There was times when Anthony pushed me hard but nothing special. I had no objective to knock him out. My corner pushed me not to do that. My trainer said ‘no’ and to ‘stick to my job.’

"I've been working so hard since January. It took me some half a year. I miss my children. I want to go home. I'm not thinking about the rematch.

"You didn't see the best Usyk. I can be much better."

Joshua, who will almost certainly activate the rematch clause, wasn’t at the races tonight but he’s come back from defeat to reign supreme once before and only a fool would rule him out from doing it again.

x
Suggested Searches:
Manchester United
Liverpool
Manchester City
Marcus Rashford
Premier League
More
boxing
Weekend's Boxing Provides A Fight Of The Year And Upset Of The...
An Upset of the Year contender, a Fight of the Year contender and a big night in Newcastle for British [ ... ]
boxing
On This Day In 1987: Tyson Brings The 15-Round Era To A Brutal...
On this day in 1987, boxing changed forever, as the last ever 15-round world heavyweight title fight [ ... ]
boxing
Brawl On The Tyne: Fury, Marshall And Chris Eubank Jr Descend...
Unbeaten Savannah Marshall makes the second defence of her WBO middleweight championship this Saturday [ ... ]
boxing
Mixed Week For The Eubanks: Five Boxing Stories You Might Have...
Boxing never sleeps, and with Fury-Wilder III in the rearview, attention has turned to exciting fights [ ... ]
boxing
Haye At 41: The World Title Wins That Defined ‘The Hayemaker’
Former two-weight world champion David Haye turns 41 today. ‘The Hayemaker’ is unfairly [ ... ]
boxing
''You Big, Stiff Idiot!'': The Wit And Wisdom Of Tyson Fury
Not content with being the most able heavyweight fighter on the planet, Tyson Fury is also a supreme [ ... ]
boxing
The King’s Gambit: Who Should Tyson Fury Fight Next?
‘The Gypsy King’ has the world at his feet after solidifying his claim to the throne with [ ... ]
boxing
Retirement Or Fight His Way Back: What Happens Now To Deontay...
Deontay Wilder’s stock amongst the boxing community managed to both rise and fall on a damaging [ ... ]
boxing
Tyson Fury Retains Heavyweight Titles In Incredible Trilogy...
The first fight was a resurrection. The second was a demolition. Tonight, Tyson Fury’s 11th-round [ ... ]
boxing
LIVE Tyson Fury v Deontay Wilder 3
Morning all! What are you doing up at this time? It's Tyson Fury v Deontay Wilder. Again! The WBC [ ... ]
boxing
Merseyside Derby: Experienced Smith Awaits For Hungry Fowler
Liam Smith takes on Anthony Fowler this Saturday in a battle for Liverpool supremacy. The former world [ ... ]
boxing
Whyte Lined Up For Fury/Wilder Winner, Five Boxing Stories You...
Ahead of a blockbuster weekend in boxing in the ring, it’s been a pretty busy week out of it. [ ... ]
boxing
The Man Who Beat The Man: Tyson Fury On The Lineal Championship
When Tyson Fury walks to the ring to face Deontay Wilder on Saturday night, he will have two belts in [ ... ]
boxing
Fury vs Wilder III Undercard Preview: Heavyweight Heaven In...
It’s heavyweight heaven this weekend in Las Vegas as not only will fight fans be treated to Tyson [ ... ]
boxing
“I Look At Deontay Wilder Like He’s Stupid” - The Tyson Fury...
“Boxing is not rocket science. It’s me going in there, punching a man's face in. That's [ ... ]
boxing
Happy Birthday, Micky Ward: Remembering The Gatti War That Launched...
The word warrior is thrown around so readily in boxing, it has lost some of its impact. While every [ ... ]
boxing
Liam Smith vs Anthony Fowler: Everything You Need To Know
There’s a monster match-up on Merseyside this weekend when Liam Smith and Anthony Fowler go head-to-head [ ... ]
boxing
On This Day In 1998: Floyd Mayweather Wins First Ever World...
“We believe in our heart of hearts that Floyd Mayweather is the successor in a line that starts [ ... ]
boxing
Undercard? When? How To Watch? Everything You Need To Know About...
Tyson Fury and Deontay Wilder go head-to head for a third time next weekend, with The Gypsy King’s [ ... ]
boxing
UK First Choice For AJ Vs Usyk Rematch, Five Boxing Stories...
There’s news on where Anthony Joshua’s rematch with Oleksandr Usyk could land, a modern [ ... ]
boxing
Rebuild And Reclaim: Why Anthony Joshua Needs A New Trainer
Anthony Joshua looked bereft of ideas as Oleksandr Usyk boxed, moved and pounded his way to a unanimous [ ... ]
boxing
My Name Is Prince: 26 Years Since Naseem Hamed Won His First...
26 years ago today, a Prince was crowned king. ‘Prince’ Naseem Hamed stopped Wales’ [ ... ]
boxing
Eubank Statement: Junior Can Be The Face Of Sky Sports Boxing
Chris Eubank Jr takes to the ring this weekend as the new crown jewel of Sky Sports’ boxing coverage. [ ... ]
boxing
Keep Moving Forward: How ‘AJ’ Can Learn From Lennox The Avenger
Anthony Joshua, the dethroned three-belt king of the heavyweight division, sat stoically in the post-fight [ ... ]
boxing
Okolie Cruises To Victory In First World Title Defence On AJ...
The first defence of Lawrence Okolie’s WBO cruiserweight crown ended swiftly on the undercard [ ... ]
boxing
The Rebuild Begins For Callum Smith As He Steps Up To Light...
Callum Smith was the best super middleweight in the world. The Liverpool fighter was the latest outstanding [ ... ]
boxing
Anthony Joshua Weighs In 19lbs Heavier Than Usyk Ahead Of Heavyweight...
Anthony Joshua has weighed in at 240lbs ahead of his heavyweight showdown with Oleksandr Usyk this weekend, [ ... ]
boxing
Okolie Is The Latest In A Proud Line Of British Cruiserweight...
Anthony Joshua will not be the only British world champion stepping into the ring at the Tottenham Hotspur [ ... ]
boxing
Anthony Joshua vs Oleksandr Usyk Is Fight Of The Year, Says...
Ahead of Oleksandr Usyk’s heavyweight showdown with Anthony Joshua at the Tottenham Hotspur Stadium, [ ... ]
boxing
From Mike Tyson To Mr. Dream, How Punch-Out!! Defined Boxing...
Only 55 men truly know what it is like to face ‘Iron’ Mike Tyson. But a generation of gamers [ ... ]