Boxing
News
After shocking the world by Mike Tyson, Buster Douglas was soon stopped in his tracks
Joey Mills
12:57, 25 Oct 2021

When you’re on top of the world, the only way to go is down. Boxing’s ultimate underdog, James ‘Buster’ Douglas, entered the ring to defend his newly-won undisputed heavyweight championship of the world against Evander Holyfield on this day in 1990. Everybody remembers the rise. The way the Ohio heavyweight waded into the myth of ‘Iron’ Mike Tyson inside the Tokyo Dome, the way he rose from the canvas and refused to capitulate like 37 men had done before him, and how he brought the most vaunted prime in boxing history to a brutal halt in the 10th round. Everybody remembers the rise, not as many remember the fall.

While his October 1990 clash with ‘The Real Deal’ was the first time he risked his WBC, WBA and IBF belts in the ring, it was not the first time someone had tried to take the championship from Douglas. The notorious Don King launched an appeal on behalf of the Tyson camp due to a perceived “long count” Douglas had received when knocked down in the eighth round. The IBF paid King’s machinations no mind, but it took the WBC and WBA a few days to fall in line and recognise the rightful new champion.

The upshot of ‘Buster’ being the man who ended Mike Tyson’s fearsome run was the frantic rollercoaster of newfound fame. Douglas was a 29-4-1 fringe contender when he punctured the wheels of the Tyson juggernaut; now he was suddenly one of the most famous people on the planet. There was a ‘Buster’ Douglas video game on the Sega Genesis, there was a WWF appearance in which he sparked out ‘Macho Man’ Randy Savage, and there was a $60 million two-fight deal with casino owner Steve Wynn. The 42/1 underdog who upset the applecart was now a king. 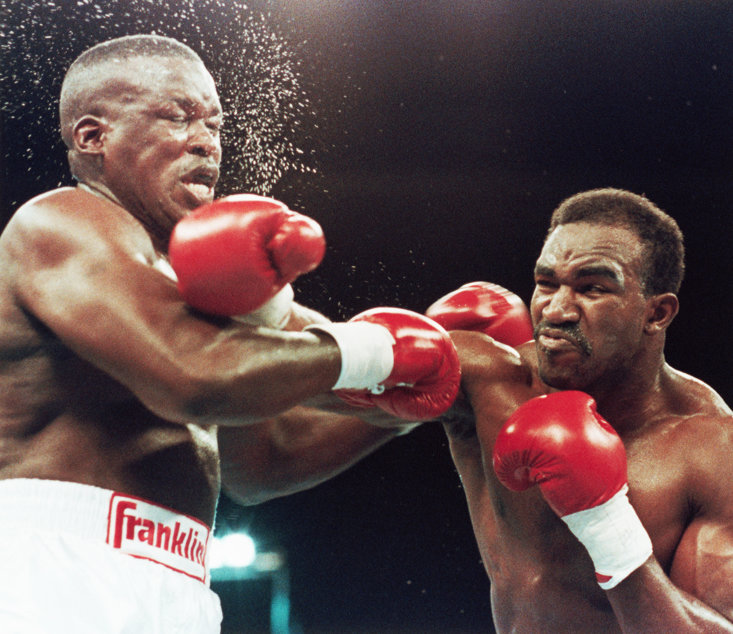 Douglas would enjoy every bit of his lofty status, and this would prove to be his downfall. Everybody wanted a piece of the new sensation, and ‘Buster’ made sure there was enough to go around when he ballooned in weight. After turning down a rematch with Tyson due to ongoing enmity for Don King, Douglas was grossly overweight by the time he entered camp for his fight with number-one contender ‘The Real Deal’ Evander Holyfield. Reports emerged of the defending belt-holder ordering hamburgers to the sauna in his penthouse suite, negating the weight-loss benefits of the hot coals.

There are reasons for Douglas’ loss of motivation. For one, he had already taken the biggest scalp in boxing. At this point Holyfield was yet to win a world heavyweight title, and while he was a highly-respected Olympian and all-time great cruiserweight, he was not yet the icon he is today. Secondly, after the financial bonanza he’d enjoyed post-Tyson, ‘Buster’ was in for a world-record payday of $24 million. There was simply nothing left to strive for in Douglas’ eyes.

However, Holyfield had everything to strive for. Bidding to become the first former cruiserweight champion to win the heavyweight title, the 1984 Olympic bronze medalist was hungry. But his appetite was not for illicit hotel hamburgers, he was focused on reigning as champion of the world, and securing his own lucrative tilt at the deposed Tyson. The relentlessly hard-working Holyfield would have one of his easiest nights in Las Vegas.

The Mirage played host to the fight, and the venue was appropriately named. By the end of the night, it felt like the Cinderella reign of Douglas had been a mirage. A collective delusion we had all lived through. Douglas weighed 246 pounds, 15 pounds north of his physique in Tokyo. Douglas shambled into one-way traffic for three of the most one-sided rounds ever seen in heavyweight championship boxing. The lean Holyfield, weighing 208 pounds, barely above cruiserweight by today’s standards, prodded, slashed and thudded away with punches against a stationary target.

Douglas roused himself enough in the third session to attempt a Hail Mary uppercut. The punch was so ill-timed that the champion lost his balance, opening himself up to a vicious Holyfield counter-right. The punch sent Douglas sprawling, in much the same way as he had done to Tyson. Douglas pawed at his lip, seeming to have his bearings but not getting up. Referee Mills Lane took up the count and the bell tolled. The unlikeliest heavyweight title reign since Primo Carnera had reached its apathetic end.

The story of Holyfield from this point is well-known. The Alabama man would establish himself as one of the greatest heavyweights of all-time over the ensuing decade. He waged war with George Foreman and outscored Larry Holmes. He shared three fights of incredible drama with Riddick Bowe. He finished what Douglas started by bringing Mike Tyson’s career as a top-level fighter to a close, sacrificing an ear to do so. As with far too many fighters, he held on too long.

After Lennox Lewis defeated him at the second time of asking in 1999, Holyfield would challenge for versions of the heavyweight championship on five more occasions. He won just one of these attempts, and after retiring in 2011 he returned just last month at the age of 58. The dulled reflexes of the aged warrior were brutally exposed by MMA fighter Vitor Belfort as he was blasted out in a single round during a pathetic ‘exhibition’ fight. No amount of social media-fuelled idiocy can detract from Holyfield’s legacy though. He truly was ‘The Real Deal’.

Less well-known is the path walked by Douglas once the dust had settled on his brief time at the top of his profession. The former champion spent six years in exile after allegations he had quit against Holyfield. Douglas’ weight ballooned to 400 pounds during his time away from the ring.

In 1996, though, the ultimate underdog was back, looking to confound expectations once more. He actually did not fare too badly, going 6-0 during his first 13 months back in the ring. There was talk of a fight with then-light heavyweight king Roy Jones Jr. Apparently Jones was warned against facing the dangerous Douglas, but he may wish he’d taken the fight when he saw ‘Buster’ go down in a single round against future Tyson and Holyfield foe Lou Savarese.

Douglas won two more fights in the first round, before retiring for good in 1999. His career was a respectable one, even if it really came down to that one night in Tokyo. Douglas would prefer to forget what happened on this day in 1990, but he will always deservedly have his place in history as the heavyweight miracle man.