Unless the first-round draw for the US Open throws up another such generation-gap clash, then Emma Raducanu will forever hold a winning record over Serena Williams – widely acknowledged as the greatest woman player of all time, and one of the very best in history across the ATP and WTA tours.

Their first-round match at the Western & Southern Open in Cincinnati, Ohio in the USA was almost a no-win occasion for the 19-year-old reigning Flushing Meadows champion, in her final tournament before defending that title claimed in stunning fashion in New York 12 months ago.

In their first ever encounter the entire crowd was rooting solidly for the 40-year-old legend, a winner of 23 grand slam singles titles, and playing what could yet prove to be the penultimate match of her illustrious career. It looks almost certain that Williams will call it a day whenever she exits her home major. And that’s if she makes it to the starting line.

Because as professional and focused as Raducanu was in holding off a first set rally from her opponent and then putting her foot down in the second for a 6-4, 6-0 victory on Tuesday night, there was something sad about seeing such an icon go down in a relatively short contest with 19 unforced errors to Raducanu’s one, and four double faults to none on the other side.

To say Williams looked rusty is an understatement, and the match-fitness levels were not what is required these days on the WTA tour – especially against a recent slam winner with 21 years advantage on her side.

Raducanu executed the perfect match in every way. She kept it low-key on the body language, with barely any fist-pumping or the usual loud exhortations from the back of the court. This was a respectful demolition job, and that continued after the final point, with no wild celebration and a then brief ‘Thank you, great match’ from Williams and a handshake before the loser exited the court swiftly to thunderous applause.

It has been a very up and down year from Raducanu after the almost unbelievable mega-high of last year in New York. There have been fitness concerns, withdrawals and some poor displays. But throughout she has remained fiercely optimistic and level-headed, regularly suggesting this was a more normal development curve, and the early slam success had distorted expectations. 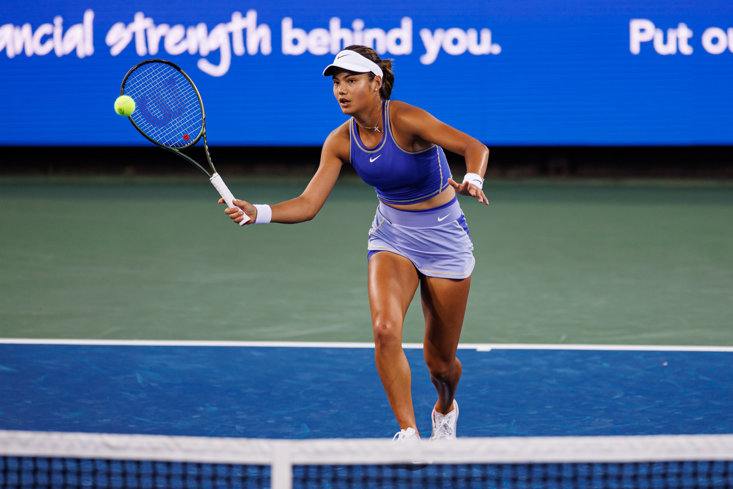 Williams’ career, which started at just 14 in 1995, could be over as early as the first round at the US Open she has won six times, the first way back in 1999. She will be hoping for a kind draw and a following wind to make some kind of splash in front of what will be a wildly supportive crowd.

And Raducanu made it very clear after the match that to have been one of the last to play Williams, and to have that experience for a first time having grown up watching the American sweep all before her, was an immense honour and privilege.

World No13 Raducanu, who plays Victoria Azarenka next in Cincinnati, has also struggled to find the right coach for the next phase of her career – but the current temporary incumbent Dmitry Tursunov can be happy about the way she approached this task on a mental level.

After a Cincinnati debut, Raducanu - who crucially held her nerve with two love service games when the going got tough in the first set at 4-3 - said: “We all need to just honour Serena and her amazing career. I am so grateful for the experience and to have been able to play her and that our careers crossed over. Everything that she has achieved is so inspirational so it was a true honour to share the court with her.

“The atmosphere tonight was amazing – for sure, even when the crowd were cheering for her I was all for it! To be honest I was nervous from the first point to the last point. I know what a champion she is and that she can come back from any situation. I just really had to stay focused and I am glad I kept my composure.

“From the moment you started playing tennis you were aware of Serena Williams, for me that was about the age of five. She was dominating the game then and I have amazing first memories of watching her at Wimbledon.

“It hasn’t been the best year of course, but from every experience I have taken something. And it was bound to happen at some point, you don’t go from nothing to winning a slam without going through the stages. I definitely went through that this year.”