Tennis
News
The King of Clay has seen his career go under the spotlight for a new biography
Hector Nunns
15:00, 13 May 2022

As Rafael Nadal continues his build-up for the French Open, where he will attempt to extend two huge records by winning the tournament for a 14th time and a 22nd Grand Slam in total, there is a new biography out charting his progress from the age of four at the Manacor Club Tenis in Mallorca to becoming one of the most famous and successful sporting superstars on the planet.

Author Dominic Bliss is a former tennis correspondent for the Financial Times and also ex-editor for the respected Ace Tennis magazine – and has been covering Spain’s ‘Raging Bull’ for the best past of 20 years.

You would expect the already-known biographical details to be drawn out expertly in such hands, and so they are – from Nadal’s many glorious triumphs and 91 titles, through the prodigious work ethic and renowned physical and mental strength, to the trademark tics, rituals and superstitions that have on occasion tested opponents and umpires between points. Together with arguably the most definitive set of pictures of Nadal's life and times found in one place, King of the Court makes for a fine coffee-table addition for any Nadal, tennis or sports fan.

This book will tell you much that you might already have known interspersed with plenty of well-researched new titbits on a player that has taken mastery of the clay to new and hitherto unseen levels in a career that now sees him worth around £170million.

The famous Spanish coach Jose Higueras once said “Clay teaches you how to suffer”, and with its long rallies and physical demands, often in extreme heat, Nadal has earned his way on the surface.

But the book’s most interesting aspect is picking out the 10 most career-defining victories for Nadal – and so here they are:

Fellow Spaniard Costa was the reigning French Open champion, and while plenty were excited at seeing the highly promising 16-year-old in action, no one seriously expected him to win. But on the clay surface that was to become almost synonymous with his own name, Nadal – being advised by fellow Mallorcan Carlos Moya – overcame a nervous start to win running away, announcing himself on the big stage as a major player.

Nadal had to miss most of the clay-court season including Paris with a stress fracture in his left ankle. But this late-season event in Poland, near the beaches of the Baltic coast offered a chance of getting his first ATP Tour title on the board. With most higher-ranked players on the US  hard-court swing Nadal, then ranked No71, took full advantage and achieved a debut success and entered the top 50 by beating Argentina’s Jose Acasuso in straight sets.

Nadal, 18, was as surprised as anyone and almost felt guilty when Spain captain Jordi Arrese selected him to play as the No2 singles man ahead of far more experienced team-mates with Carlos Moya having already put Spain 1-0 up against the USA in the final. But in front of a sell-out 27,000 crowd in Seville he overcame the loss of a first set tiebreak against world No2 to win in four epic sets. Spain went on to win the Davis Cup 3-2, heightening the significance of the win. 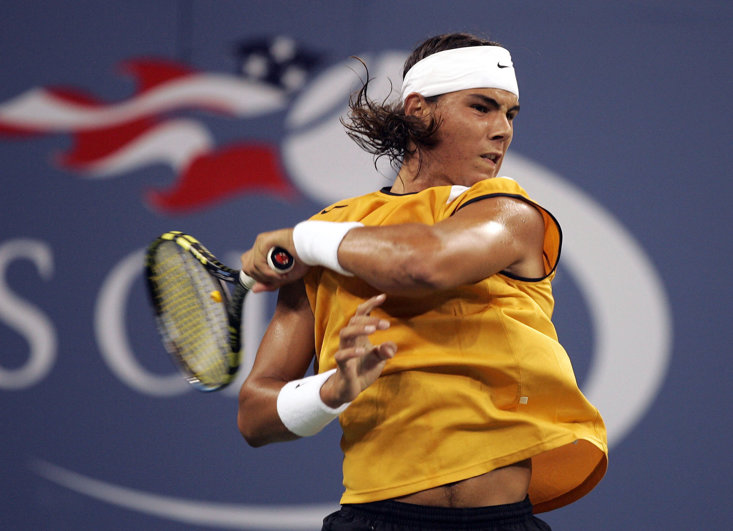 In an amazing calendar year for Nadal, this was his first Masters series title – and there would be far more success to come during the months that followed. Argentina’s Guillermo Coria did what no one else had managed - including Gael Monfils and Gaston Gaudio - by taking a set off the Spaniard – but that was as far as it went. Nadal was very aware of what he had done. He said: “My first very important title, no? And if I improve my shots, I can win a lot of matches.” Prophetic words.

Before winning his first French Open title, suggesting Nadal would go on to win 13 might have seen you locked up. But as his level on clay continued to rise, Roger Federer and David Ferrer were among mmhis victims en route to the final. With regular explosions of ‘Vamos!’, Nadal overcame the loss of the first set to Argentina’s Mariano Puerta to win his first Slam. He was presented with the trophy by Zinedine Zidane, and celebrated in a Champs Elysee night-club.

A first Wimbledon title was achieved against the greatest ever exponent of tennis on that surface in Roger Federer - who had beaten him in the final 12 months previously - in a truly epic match that lasted a total of four hours and 48 minutes, finished at 9.18pm in a contest badly affected by rain delays, and was hailed by many as the greatest ever at Wimbledon or even in tennis generally. Nadal fulfilled a dream with his win.

Views vary on the true significance of Olympic gold to sportspeople that grow up dreaming, unlike track and field athletes or rowers, of success in other arenas. But there can be no doubt that Nadal both fully embraced the experience of being part of Spain’s team, and also that it helped him oust Roger Federer as world No1 after four and a half years – and join a club of two with Andre Agassi to have won all four Slams and Olympic gold in their careers.

This capped Nadal’s finest year. He had already won Slams on clay and grass in Paris and London, and in New York became the first man to win Slam singles titles on those surfaces and a hard court in the same year in history. In a final postponed to the Monday due to bad weather, it was then interrupted for another two hours. But it was Nadal that emerged victorious in a clash of fiece intensity.

With so few spectators allowed due to restrictions around the Covid pandemic, there was almost an eerie atmosphere during the presentation to Nadal of a 13th trophy at Roland Garros, and tying Roger Federer’s career total of 20 Slams. But that did not detract either from a performance that saw Nadal destroy Novak Djokovic, nor the gargantuan achievements.

He clearly couldn’t leave it at 20 – and this marked not only one of the great comebacks in Nadal’s career and tennis history, but the day the Spaniard became the greatest player men’s tennis has seen – at least in terms of the tournaments that matter most. Russia’s Daniil Medvedev looked home and hosed at two sets up. But with a herculean effort Nadal dug impossibly deep to claim thay record-breaking 21st major.

‘Rafa Nadal – King of the Court’ is written by Dominic Bliss and published by Ivy Press – hardback edition available in book shops and online at £20.

x
Suggested Searches:
The Sportsman
Manchester United
Liverpool
Manchester City
Premier League
More
tennis
British Star Cameron Norrie Wins First ATP Title On Clay Ahead...
Cameron Norrie saw his preparations for the French Open come together perfectly by winning his [ ... ]
tennis
Wimbledon Faces Major Dilemma As WTA And ATP Withdraw Rankings...
Unless there are further seismic developments in the weeks to come, this year’s Wimbledon Championships [ ... ]
tennis
End Of An Era For British Women's Tennis As Robson Joins Konta...
As they say, nothing lasts forever, and in sport careers come and go in the blink of an eye. On Monday, [ ... ]
tennis
Everything You Need To Know About The 2022 French Open As Djokovic...
The French Open is here and the qualifiers have begun for the second Grand Slam tournament of the year. [ ... ]
tennis
Can Alcaraz Follow In Compatriot Nadal's Footsteps And Dominate...
The French Open is just around the corner and after falling at the semi-final stage last year, everyone [ ... ]
tennis
Andy Murray v Novak Djokovic: The Great Battle Resumes After...
It has been five years in the making. Andy Murray and Novak Djokovic go to battle once again on Thursday [ ... ]
tennis
British Stars Enjoy Positive Start To Madrid Open
It has been a fine start for British talent in the Madrid Open this week with Emma Raducanu, Dan Evans, [ ... ]
tennis
Can Croatia’s Junior Sensation Petra Marcinko Follow World No1...
A quick glance at the roll call of honour of junior girls Grand Slam winners is enough to show it is [ ... ]
tennis
Emma Raducanu Needs The Freedom To Develop At Her Own Pace
Change is a thing of nature, it happens all the time and sport is no different. For teams, players come [ ... ]
tennis
Outspoken Novak Djokovic Is In Danger Of Following In Margaret...
‘Sometimes the wise man says nothing at all’ Novak Djokovic could learn to take this advice [ ... ]
tennis
British Tennis Is In Safe Hands As Cameron Norrie Breaks Top...
Emma Raducanu’s US Open triumph in September was a monumental piece of British sporting history [ ... ]
tennis
No Escape From Alcaraz: The Latest Teenage Sensation Taking...
Last year, the world of tennis fell in love with a teenage sensation as Britain’s very own Emma [ ... ]
tennis
Naomi Osaka Is Winning Matches, But More Importantly Smiling...
Naomi Osaka has battled her way through to the semi-finals of the Miami Open after defeating America’s [ ... ]
tennis
Linda Fruhvirtova: The 16-Year-Old Sensation Following In Sharapova's...
What were you doing at 16? Probably not making an impact on the sport of tennis in the same way that [ ... ]
tennis
Grand Slam Winners Thiem & Wawrinka In Joint Injury Return On...
For two former Grand Slam winners, who both climbed as high as No3 in the world, the Andalucia Open [ ... ]
tennis
Miami Open: Jack Draper A “Better Player” Ahead Of Rematch With...
On Friday, out in the Florida sun, the heat will rise on court at the Miami Open as we witness a Battle [ ... ]
tennis
Injury Setback Is Just Another Hurdle For Nadal To Clear As...
2022 has so far exceeded expectations for Rafael Nadal and some of the tennis he has showcased has been [ ... ]
tennis
Ashleigh Barty Retires: ''There Is No Right Or Wrong Way To...
World No1 and reigning Wimbledon champion Ash Barty has left the tennis world stunned by announcing [ ... ]
tennis
Iga Swiatek Up To No2 In World Rankings After Scorching Start...
Whatever Iga Swiatek’s still relatively new coach Tomasz Wiktorowski said to her after scraping [ ... ]
tennis
On This Day: Roger Federer Joins Jimmy Connors As A Centurion
Roger Federer is a tennis icon who has spearheaded an era of greatness and intense competition. His [ ... ]
tennis
World No1 Daniil Medvedev Ushering In A New Era On The Court
The tide is changing in tennis. A new era is being ushered in as an 18-year monopoly has finally come [ ... ]
tennis
One Year Since Novak Djokovic Won The Australian Open, Has He...
It’s been quite the year for Novak Djokovic, who is back in action today. On this day in 2021, [ ... ]
tennis
Why John McEnroe Epitomises The Best In Tennis And How It Can...
It’s nearing the end of the long, hot summer. The year is 1984. You’ve got your Member’s [ ... ]
tennis
Djokovic's Vow To Miss Tournaments Poses Risk For His Grand...
We may be in February and the Australian Open is already done and dusted but the Novak Djokovic Covid [ ... ]
tennis
Del Potro's Tennis Legacy Is Secure Ahead Of Argentine's Imminent...
Tennis is preparing to bid farewell to one of the star players of this era. He may not be on the level [ ... ]
tennis
Greatest Of All Time? Nadal's 21st Grand Slam Title Makes Him...
On Sunday we witnessed history, and it epitomised the great period of rich history of tennis that has [ ... ]
tennis
Rafael Nadal Pulls Off The Ultimate Comeback To Win The 2022...
Rafael Nadal produced an astonishing comeback to secure the most improbable victory of his career and [ ... ]
tennis
Ashleigh Barty Becomes First Home Singles Winner Of Australian...
For 87 minutes, there was barely a flicker of emotion from Ashleigh Barty. No histrionics, no drama [ ... ]
tennis
Historic Weekend In Melbourne As 2022 Australian Open Comes...
This year’s Australian Open has served up some excellent tennis and we are at the last stretch [ ... ]
tennis
Five Years Since Her Last Grand Slam Win, Serena Williams Remains...
Remarkably, it has now been a full five years since the greatest female tennis player of all [ ... ]