Rugby League
News
The domestic season has come to a thrilling climax, paving the way for an eagerly-anticipated World Cup
George Riley
16:05, 03 Oct 2022

A bruising domestic season has come to a thrilling climax and paved the way for the most eagerly-anticipated World Cup in rugby league history.

International squads have been touching down in the UK and setting up camp, as Leigh Centurions and Swinton Lions secured promotion in the season finale.

Leigh were the heaviest favourites to gain promotion back to Super League in the tournament’s history, and Adrian Lam’s side did not disappoint by brushing aside surprise package Batley Bulldogs in the Betfred Championship Grand Final. While Swinton struck late to down Doncaster in a thrilling League One Grand Final live on The Sportsman.

But while Leigh’s elevation back to the top table came as no surprise - indeed it was absolute reward for a season of utter dominance - the bigger question for Derek Beaumont’s club is can they stay up this time?

Charismatic millionaire Beaumont is the passion, heartbeat and chequebook behind

Leigh’s professional rugby league team. Without him they would most likely be out of business. Yet the battle to shake off the “yo-yo” tag remains one the club has been unable to win. That is the harsh reality of how hard it is for promoted sides to survive in Super League.

Toulouse have just bowed out after only one season in a top flight they put years of work and investment into reaching. The previous year was Leigh’s turn again, promoted and then relegated with a paltry two wins to show for their efforts.

So will next year be any different?

“Everyone has said the words 'let's stay up’ but I’m not about that,” says head coach Lam, a legend of a player with Wigan and Papua New Guinea.

“I didn’t come here to ‘just stay up’. We are heavily invested financially with an owner who is a little bit crazy but is very, very passionate about what he does and I love that about him. His heart is in the right place and without people like him rugby league doesn’t exist.”

If 2023 is going to be different for Leigh, then they have to solve the quota conundrum.

Currently rules allow Championship clubs as many overseas players as they like. Super League rules permit seven. So if finances allow then a side can pretty much fill itself full of superstars to gain promotion, but then have to restructure. It is a big reason most clubs come straight back down.

“It has been an incredible challenge this year to prepare for Super League, retain all your best players and recruit,” Lam admits.

“It’s too hard to prepare to go up into Super League. That’s why so many teams go up and then back down, because you don’t have the opportunity to build.

“I don’t want to let go of anyone. They’re all quality players and I love them all.”

Leigh may have outclassed the opposition this season, but this time last year they only had seven players. Some outstanding recruitment created an all-star squad who completely outstripped its part-time Championship opposition. But the overseas players are in the double figures so need to be scaled right back again.

Yet, notwithstanding the annual retain-and-recruit jigsaw for promoted sides, this year’s landscape may look rosier for the Centurions. 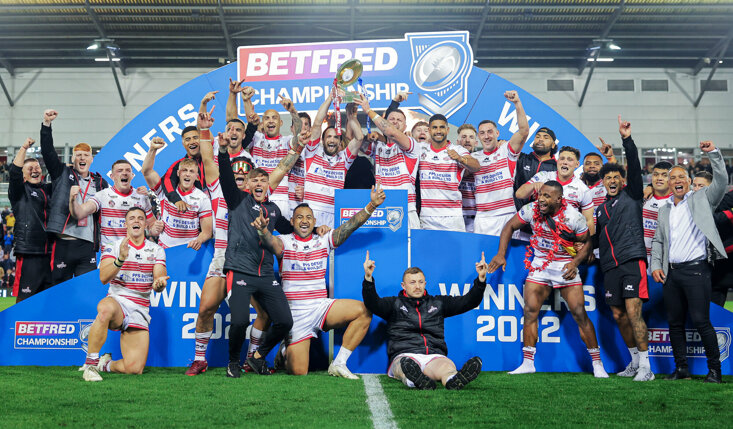 They will undoubtedly be better prepared than last time, when they accepted promotion late in the day to fill the void left by financially-stricken Toronto Wolfpack. Even Leigh will admit they were not ready and never stood a chance.

The current competition looks weaker than last time too. Wakefield may have survived this season but are heavily tipped to struggle again. After replacing head coach Willie Poching by promoting Mark Applegarth from within, it leaves a coaching staff as well as a playing roster to assemble.

And then there is IMG looming on the horizon, with their biggest proposals for change centring on a licence system that would ultimately end promotion and relegation anyway. So Leigh will feel now is their time to shine, and if they can work out how to keep their squad relatively unchanged, they will be very confident of doing so.

Lam will now head straight into World Cup mode where the Leigh boss will work as assistant to Mal Meninga for Australia.

His main rival in this season’s Championship - the now-departed Featherstone Rovers boss Brian McDermott, will join the coaching staff of Fiji who provide the opposition for England this Friday night in the only warm-up game for Shaun Wane’s side.

What McDermott does after that is of big interest. The legendary coach was not supposed to fail with Featherstone, but even he could not guide Rovers to the promised land of Super League. In fact they didn’t even make the Grand Final. His next job will need to be a challenge that McDermott can get his teeth into, rather than another one-year project. But all obvious domestic roles are filled, for now.

So with rugby now in full-on World Cup mode, this writer is no exception - composing this column from the Leeds Rhinos training ground in Kirkstall where both Jamaica and New Zealand are currently training.

The contrast between the two squads could not be more different, with the heavyweight Kiwis and their NRL all-stars arriving on the Rhinos club coach, as the Reggae Warriors parked up in their own small cars, before huddling together in the cold of the car park until New Zealand had vacated the gym.

Spend just a few minutes in the company of this Jamaica squad however, and those chills quickly turn into a real warmth of spirit, such is the overwhelming bond and positivity in this proud group of underdogs.

That is what this World Cup is all about.