Wakefield Trinity head coach Willie Poching has challenged his side to complete their relegation rescue act while a horrified Hull FC boss Brett Hodgson has accused his underachievers of going missing.

A dramatic round of fixtures in the Betfred Super League also saw Salford produce another scintillating display to defeat the much-fancied Huddersfield Giants but Leeds Rhinos maintain their forward momentum to stay above the Red Devils in the top six.

Reassured by Warrington Wolves’ fightback to win their relegation four-pointer against Toulouse, Wakefield knew that a big performance against Challenge Cup winners Wigan Warriors would strike a huge blow in the battle for survival.

And Trinity did just that with a remarkable 30-12 win over a Warriors side tipped by many to run champions St Helens close for the title. While it is mathematically still game on at the bottom, realistically Toulouse now look done for. Sylvain Houles’ side are four points adrift with only one of their last four games at home - a derby against Catalans Dragons.

It looks like Poching has led Wakefield to safety.

“We are not home and hosed, we need to keep bodies and minds as fresh as possible to deliver that again,” warned the Trinity boss.

“But I’m really proud of their hunger. We had a resilience about us that helps grow a lot of belief and trust.

“The proof is in the mathematics. Four games to go means there are eight points there, and if you have watched Toulouse they are not going to die wondering. The challenge is for us to back up that performance and secure safety as quickly as possible.”

Hull’s slump has been remarkable meanwhile, one that has seen the Black and Whites go from genuine playoff contenders to being completely out of the picture.

And the manner of their latest humbling is likely to increase the pressure on head coach Hodgson. The former State of Origin full-back was left seething by a 60-6 home reverse to Saints - the third time in the last six weeks that his side have conceded sixty points or more. 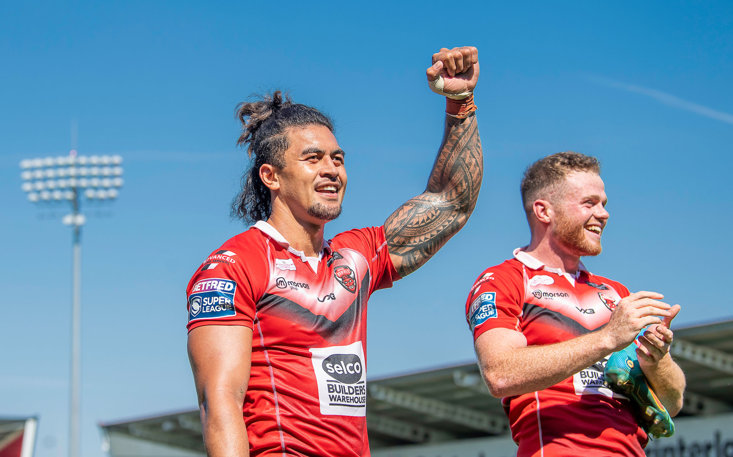 “We weren’t willing to do what we needed to do when we got tired,” said the Australian who pulled no punches.

“Some of our senior players have to stand up, and I don’t think they did.”

In truth Hull have looked lost without star man Jake Connor but Hodgson was keen to point out that their injury setbacks have been running far deeper, with “nine of our best on the sideline”. The fiercely passionate Black and Whites fans are unlikely to be as understanding and will demand an immediate response against Wakefield this coming Friday night.

Head coach Paul Rowley has been the chief cheerleader for his Salford side’s credentials this season and the Red Devils further backed their manager’s bold claims with another stylish win.

The home side outclassed Challenge Cup finalists Huddersfield at a sun-soaked AJ Bell Stadium in front of the Channel 4 cameras on Saturday to ruin the return of former boss Ian Watson.

Salford’s fans are a vocal, loyal bunch and such has been the manner of their side’s attacking performances this season that they are now turning up expecting to see a victory.

The atmosphere at the weekend was terrific and Salford made one of the best teams in the competition look decidedly ordinary. Having already warned his rivals that Salford will be dangerous if they can sneak into the playoffs, Rowley made another bold claim after this latest win - that there is no better back-line in British rugby league.

“We’ve clearly got a back-line that’s as good as anything in the league,” he told The Sportsman after the game. “But while we are aware of that I think the backs will put the praise to the middles and the people who connect them up in the spine.”

Kallum Watkins was again sensational, with the former Leeds ace now arguably performing as well in the back row for Salford as in any of his stellar seasons for the Rhinos in the centres.

Salford’s only problem in their pursuit of that top six is that Leeds occupy sixth spot. And the resurgent Rhinos just don’t look like losing.