“We are in the mix but in no way do I see us as the team to beat. Definitely not.”

Matt Peet, head coach of Betfred Challenge Cup winners Wigan is talking to The Sportsman after watching his side flex their muscles again with a commanding Super League win at rivals Salford.

The 30-12 victory was a second successive dominant display off the back of their thrilling heroics to beat Huddersfield at Tottenham to lift that iconic silver trophy for a record-extending 20th time.

Their display at Salford was a ruthless mix of resolute, rock-solid defence and breathtaking attacking flair, capped by a stunning hat-trick from lightning wing Bevan French, who looks increasingly destined for the NRL.

Sides traditionally struggle after an all-consuming Challenge Cup final. And despite admitting they indulged in a few days of boozing to bask in the moment, Wigan look empowered by their success, invigorated rather than jaded by their Cup heroics.

That was a question The Sportsman put to quiet man Peet, a man of few, chosen words, who prefers the talking to be done on the grass.

“I know what you mean but I was actually disappointed that we had a lull before the final. I don’t think we can afford to dip because we dropped those points going into the final,” he said.

“We have spoken about having that old-school mentality where we came out of Tottenham and the lads had a drink and a celebration but then you get your work gear back on and get the job done.”

Neither beaten finalists Huddersfield nor winners Wigan have lost since Tottenham. Both sides have been able to leap straight back on to the horse with brilliant back-to-back wins strengthening their pursuit of champions St Helens at the Betfred Super League summit.

“I think we had to knuckle down and come out of that final quickly,” Peet tells The Sportsman. 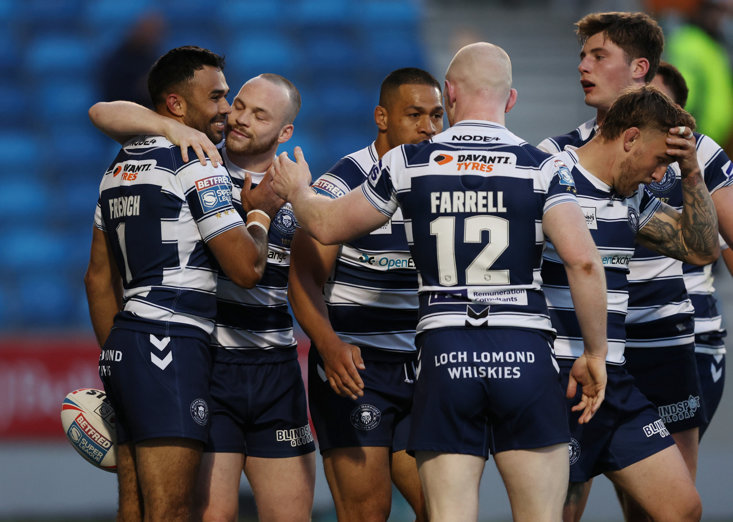 “We actually had a meeting not long after Tottenham where we said that we were in a decent position but our form wasn’t good. So individually and collectively we all had to focus on these two games since. We would basically be fifth or second when we looked at it. So I’m quite proud with the resilience the lads have shown. Resilience probably isn’t the right word, determination is.”

When Peet’s assistant coach Lee Briers spoke to The Sportsman a month ago he was at pains to point out that it will take Wigan a while in their rebuild to chase down their bitter rivals St Helens.

“We don’t make any secret at the club that Saints are the number one side,” he said. “They are the benchmark, we are the challengers.”

Yet surely winning silverware six months into his reign has meant Peet recalibrating the club’s ambitions, and reevaluating how long it could take to knock the treble winners off their perch?

In short, most neutral observers can see Wigan are already not that far off, and there must therefore be a genuine belief within the Warriors that they can rival Saints for their year’s title?

“No I don’t think that,” says Peet. “We are under no illusions where we sit. They are such a fantastic team and I’ve said before that I think it will take years before they are not the best team.

“They are an exceptional team and I don’t think they will be worried about us.

“That is truthful. We are very honest with ourselves and know that we have a lot of improvement in us. We are sitting around third spot I think in terms of consistency and form.”

There is a clear element of managing expectations from Peet and his highly-rated coaching staff of Briers and club legend Sean O’Loughlin.

Yes, breaking a dynasty like the one being enjoyed by Saints will take time, even the years that Peet claims. But to suggest Wigan are merely also rans this season is ludicrous.

It feels like their epic Betfred Challenge Cup triumph has actually been counter-productive in keeping their quiet progress under wraps.

The world now knows they are snapping at Saints’ heels.

And the frightening attacking partnership of Jai Field and Bevan French is up there with the very best that Super League has ever seen.