Great Britain clinched their place in the Davis Cup quarter-finals on Saturday afternoon with a hotly-contested 2-1 win over the Czech Republic in Innsbruck, and it was the specialist doubles pairing of Joe Salisbury and Neal Skupski who sealed victory in the tie by beating Jiri Vesely and Tomas Machac 6-4, 6-2.

GB, who finished Group C with two wins after also seeing off France, are bidding to win the Davis Cup for an 11th time, the most recent occasion coming in 2015. Before that, you have to go back to 1936 for success in the international team competition.

But, after a rollercoaster tie against the Czechs in which youngsters Machac and Jiri Lehecka outperformed their lowly world rankings, Leon Smith’s men pulled through. Earlier Cameron Norrie had levelled the tie with a three-set win over Lehecka after Dan Evans had lost the opener to the inspired Machac.

Salisbury said: “It feels very special to get my first Davis Cup win in a match like that. The bench made it an amazing atmosphere even without any fans here, the whole support team made up for that. Playing for your country, bein here and getting the win is special.” 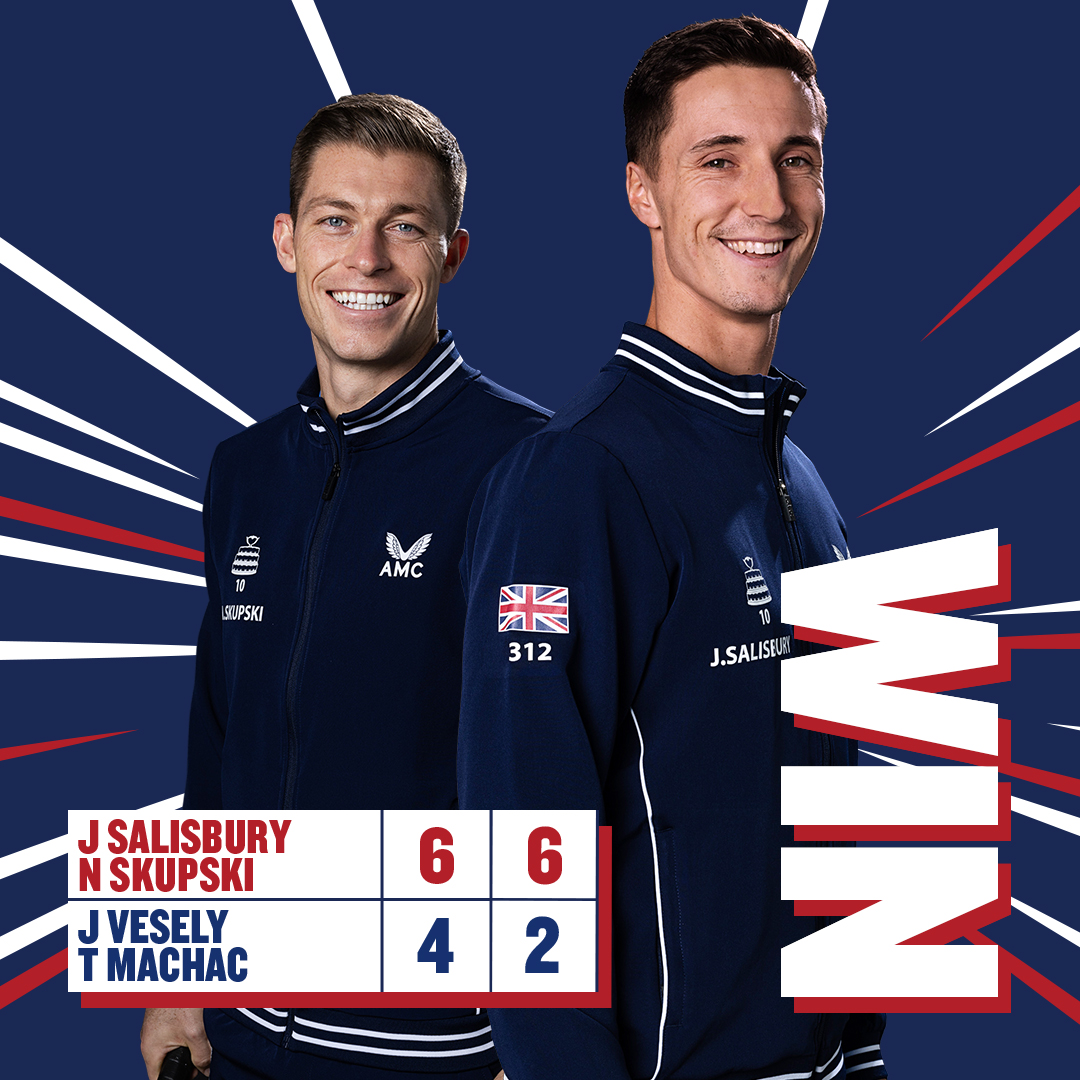 Skupski added: “We were very disappointed losing against the French doubles team on Saturday. We regrouped and wanted a good start with a lot of energy and positivity to try and play free, and it worked in the end.”

Skipper Smith was proud of his team's effort, saying: “It is great to get to another quarter-final. Today was really tough, people looked at the rankings and thought this would be straightforward but it is never like that, the young Czech team played really well, and we have done that as underdogs in the past.

“The young lad Machac against Dan Evans played like a top-20 player and a great match. Then Cameron dug deep when he needed it.”

The day had begun with British number two Evans on the wrong end of a mauling from 21-year-old Machac to put GB firmly on the back foot in their bid to get out of Group C and into the knockout phase. Machac, ranked 143 in the world, made a mockery of that status with big serving and powerful ground strokes to blow world No. 25 Evans away 6-2 in the first set – serving three aces as he closed it out.

Birmingham’s Evans desperately tried to fire himself up – a little too much at the start of the second set as he obliterated a racket after falling 0-40 down on his opening service game which he went on to lose. But he rallied and appeared to be poised when moving 5-2 ahead and then having a chance to serve out the set at 5-3.

But the 31-year-old chose that moment to throw in a shocker of a game with his forehand breaking down, and Machac, who also beat France’s Richard Gasquet in his first tie, took full advantage – winning the last five games to take the match 6-2, 7-5. 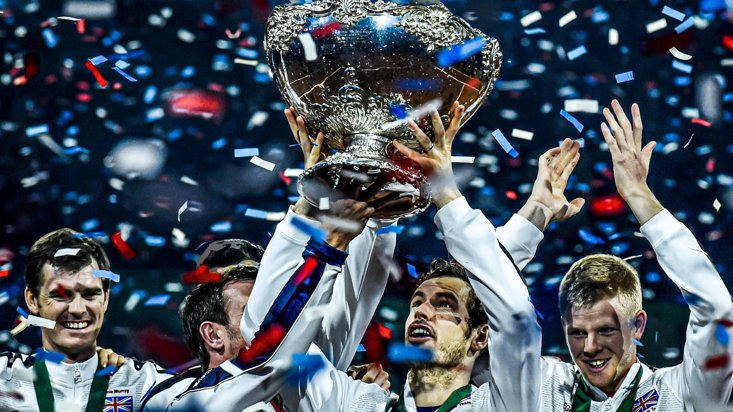 BRITAIN LAST WON THE DAVIS CUP IN BELGIUM IN 2015

That piled a bit more pressure on British No1 Norrie, the 26-year-old who has enjoyed such a fine season in rising to No12 in the world - but he responded well at the start against the 20-year-old Lehecka, taking the first set 6-1 with three breaks of serve.

There then followed a near-collapse in the second set from Norrie, one that he lost 6-2 to leave the tie once more right in the balance. But with roars of encouragement from the GB bench not least from Evans he found his form at the right time to seal a 6-1, 2-6, 6-1 victory in the ultimate ‘game of three sets’.

Norrie said: “There is obviously a bit of pressure coming out for your match at 1-0 down. But I was feeling good and comfortable in the morning, and came out firing in the first set.

“At the start of the second set I missed a couple of first serves and he was playing more aggressively, I went down a break and got a bit down on myself. But the bench were incredible and got me back up.

“And that helped me get to a similar level again in the third set. It is never easy being the favourite, and in that situation but I really enjoyed the match and looked to my forehand and being aggressive with that all the match.

“At the end of the second set I just felt I had missed a lot of first balls and given him a lot of cheap points, plus he raised his level and was serving big. But when I left the court I managed to re-set and play my game at the end for what was a must-win match.”

So it was over to Salisbury ansd Skupski for the decisive doubles against two players who had both played in doubles, but never together – handing the Brits a significant advantage. GB made the crucial break of Vesely’s serve to move 5-4 up in the first set before taking that 6-4. And Salisbury and Skupski were always in control in the second set, taking that 6-2.

GB’s opponents in the quarter-finals will be Germany. Even without world No3 Alex Zverev, who withdrew after a successful but arduous season, the Germans won Group F by beating Austria 2-1 in their match on Sunday night – their second victory of the group after beating Serbia by the same score.

x
Suggested Searches:
Manchester United
Liverpool
Manchester City
Marcus Rashford
Premier League
More
tennis
Andy Murray's Everlasting Impact Goes Way Beyond The Tennis...
The headlines today following Andy Murray’s round two Australian Open exit were all too predictable. [ ... ]
tennis
Australian Open Day 4: British Nightmare As Raducanu And Murray...
Day four of the Australian Open saw the Brits back in action with mixed results. Andy Murray exited [ ... ]
tennis
Australian Open Day 3: Defending Champ Naomi Osaka And Rafa...
After the success of the Brits yesterday in Melbourne, today we saw some of the best players in the [ ... ]
tennis
British Tennis Stars Flourish Down Under As Raducanu And Murray...
One thing that is already guaranteed for Britain’s tennis stars is that they have done a better [ ... ]
tennis
Murray Has Shown A Willingness To Adapt And Evolve Ahead Of...
Three years ago in Melbourne, a disconsolate Andy Murray addressed the media and struggled to convey [ ... ]
tennis
Great Britain See ATP Cup Semi-Final Hopes Dashed After Canada...
Great Britain saw their hopes of reaching the ATP Cup semi-finals dashed by Canada on Thursday at the [ ... ]
tennis
Defending Champion Naomi Osaka Returns To The Australian Open...
Japanese tennis star Naomi Osaka just wants to have fun and who can blame the former world number one, [ ... ]
tennis
Why The Australian Open Might Be Better Off Without Federer,...
Aussie tennis star Nick Kyrgios has said that no ‘Big Three’ of Novak Djokovic, Roger Federer [ ... ]
tennis
A Perfect Blend Of Youth And Experience Make Up Our Tennis Stars...
The new tennis season is fast approaching, just a few short weeks after the previous campaign ended, [ ... ]
tennis
Andy Murray Can Roll Back The Years When He Returns To The Australian...
With 2021 drawing to a close, not only are we about to enter a new year but it signals the imminent [ ... ]
tennis
The Greatest Qualifier & The Greatest Ever? The Best Tennis...
The tennis landscape is beginning to change. Roger Federer and Serena Williams, legendary performers [ ... ]
tennis
Emma Raducanu Named BBC Sports Personality Of The Year For 2021
Emma Raducanu has been named the BBC Sports Personality of the Year after her incredible breakthrough [ ... ]
tennis
SPOTY 2021: Likely Winner Emma Raducanu Has Been The Success...
Barring a massive surprise, Britain’s teenage sensation Emma Raducanu will lift the BBC’s [ ... ]
tennis
Daniil Medvedev Leads Russian Tennis Federation to Davis Cup...
Daniil Medvedev brought an extraordinary personal and team year of success to an end by leading the [ ... ]
tennis
WTA Pull Women’s Tennis Tournaments From China Over Peng Shuai...
The governing body of women’s tennis sent the strongest possible message to Chinese authorities [ ... ]
tennis
Johanna Konta Retires Having Carried The Baton For British Tennis
Johnna Konta, the former British number one and Wimbledon semi-finalist, has called time on her tennis [ ... ]
tennis
Great Britain Lose In Agonising Fashion To Germany In Davis...
Great Britain saw their Davis Cup hopes dashed in Innsbruck on Tuesday night in agonising fashion as [ ... ]
tennis
Cameron Norrie And Dan Evans Get GB Davis Cup Campaign Off To...
Great Britain got their Davis Cup campaign off to a winning start on Saturday by taking the opening [ ... ]
tennis
Zverev Wins ATP Finals Title To Cap Incredible 2021
Alex Zverev stormed to a second ATP Finals title in grand manner, beating world No2 and defending champion [ ... ]
tennis
Garbine Muguruza Becomes First Spaniard To Win WTA Finals
Garbine Muguruza is the first Spanish woman to win the WTA Finals end-of-season tournament after a straight [ ... ]
tennis
Norrie Ready For First Clash With Djokovic Despite Opening Defeat...
After receiving a late call-up as an alternate for his debut appearance at the glamorous ATP Finals, [ ... ]
tennis
WTA Finals SF Preview: Debutants Seize Their Moment In Mexico
The WTA Finals debutants have certainly grabbed their opportunity this year. From the semi-final line-up [ ... ]
tennis
Is It Time For Roger Federer To Consider His Retirement From...
Roger Federer is not only one of the greatest tennis players of all time, but one of the greatest athletes [ ... ]
tennis
ATP Finals Preview: Novak Djokovic Bidding To Match Roger Federer...
No London, no Roger Federer, and no Rafael Nadal – but the Nitto ATP Finals in its new home of [ ... ]
tennis
Raducanu’s Promising Partnership With Beltz Will Add Stability...
She promised that she would have a coach in place by the end of the year and now it is confirmed, with [ ... ]
tennis
Djokovic Eclipses Sampras, But Why Isn't He Loved Like Nadal...
Novak Djokovic just can’t stop breaking records as he looks to eclipse the fellow greats of this [ ... ]
tennis
Australian Open Up In The Air As Host Nation Remains Divided...
The Australian Open is just under three months away and there is still doubt over what is going to happen [ ... ]
tennis
Emma Raducanu Needs Patience And Breathing Space To Reach Full...
Despite having already won a Grand Slam title, rising tennis star Emma Raducanu has stressed that [ ... ]
tennis
Another Brilliant Brit: Cameron Norrie Achieves Career High...
This is truly a unique moment in modern British tennis. Just five weeks on from Emma Raducanu’s [ ... ]
tennis
Raducanu Needs To Tread Carefully In These Early Days As Tennis'...
After falling at the first hurdle in Indian Wells last week, tennis’ golden girl Emma Raducanu [ ... ]