Manchester United have not won a trophy since 2017. While this fact is well-publicised and often trotted out to show the scale of their decline, there is an underlying number that is mentioned less. The Red Devils will face Nottingham Forest on Wednesday night in the semi final of the Carabao Cup. This is the seventh time since 2017 that United have reached this stage of a cup competition.

While the Old Trafford club endure their longest trophy drought in over 40 years, The Sportsman looks back at the multiple near-misses they’ve suffered since their 2017 Europa League victory.

There was no talk of a trophy drought as Jose Mourinho’s Reds eased past Spurs at Wembley Stadium in 2018. Just one year removed from lifting the Community Shield, League Cup and Europa League, it looked like United were on their way to more trophies.

Best remembered as one of goalscorer Alexis Sanchez’s few competent displays in a United shirt, Spurs’ goalscorer being Dele Alli adds to the feeling of this game being particularly anachronistic. Herrera’s winner sent United back to Wembley, where they were beaten 1-0 by Chelsea. The drought begins.

Ole Gunnar Solskjaer’s divisive reign at Manchester United was notable for how well the former Molde manager matched up against Pep Guardiola. Only Jurgen Klopp and Jose Mourinho have beaten the Spaniard more often than Solskjaer.

One of those victories arrived here, albeit the 1-0 second leg win was not enough to overturn City’s 3-1 victory in the first. Nemanja Matic’s goal 35 minutes into the second leg gave United plenty of time to work with, but they couldn’t take advantage and seal a first cup final in two years.

This one had a familiar air to it. Not only was it more FA Cup heartbreak at the hands of Chelsea but it was a second domestic cup semi-final defeat of the COVID-prolonged season.

United never really got going behind closed doors at Wembley Stadium. Goals from Olivier Giroud and Mason Mount and an own goal from Harry Maguire killed the tie before a late Bruno Fernandes consolation. Chelsea would go on to lose 2-1 in the final to Arsenal. 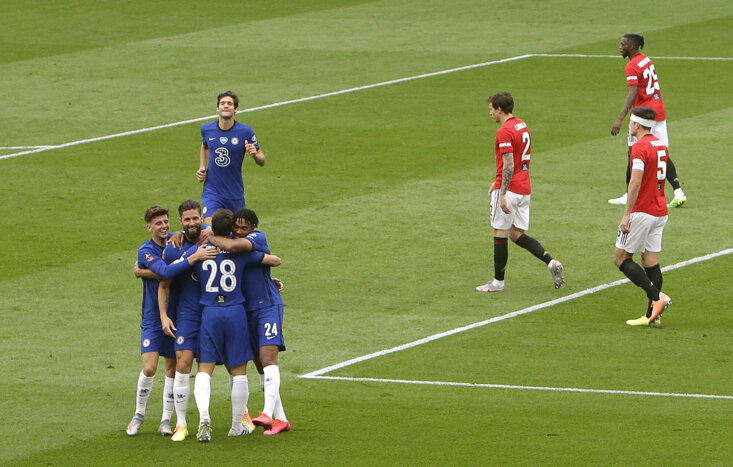 A third semi-final in the same season, Solskjaer’s United were fast becoming cup nearly-men. This match was played out over a single leg due to the COVID-19 pandemic, meaning United had a winner-take-all opportunity to reach the final of a competition they had won in 2017.

Bruno Fernandes’ ninth-minute penalty gave the Red Devils early hope but it was soon snuffed out. Fernando Saez redressed the balance before half time then ex-Newcastle United loanee Luuk de Jong notched the winner. After his side came up short in four semi-finals across two seasons, unconvinced fans began to question Solskjaer even more vociferously.

For those playing along at home that’s two FA Cup eliminations at the hands of Chelsea and now two Carabao Cup knockouts courtesy of Man City. If the last six years at Old Trafford have felt like an endlessly-repeating, trophyless spiral, that’s because they kind of have been.

John Stones and Fernandinho were the goalscorers as Guardiola once again showed the cup nous that has seen lift a litany of club honours. One could argue the luck of the draw had been cruel in once again pitching them against their local rivals, but United cannot expect to win trophies without meeting the best teams.

The Red Devils’ last foray into a semi-final actually ended in victory. United played out two thrilling ties with Roma to reach a first cup final since 2018.

The vital work was done in the first leg, when Bruno Fernandes and Edinson Cavani’s braces highlighted a 6-2 Old Trafford victory. Cavani repeated his two-goal heroics in the second leg, where a 3-2 defeat in the Italian capital was enough to send United through. The final was less joyous for the Reds, who lost 11-10 on penalties after a 1-1 draw against Villarreal.