Tennis
News
Williams was beaten by world No115 Harmony Tan in a thriller at Wimbledon on Tuesday
Hector Nunns
23:29, 28 Jun 2022

If this was the last time Serena Williams set foot onto the Centre Court, what an incredible memory she left those lucky enough to have a ticket and the tens of millions watching on TV around the world. The winner of seven singles titles at SW19 and 23 across the four grand slams lost a 3 hours 10 minutes epic against Harmony Tan, the world No115 from France.

But the figures alone – a match that saw the 24-year-old Tan beat arguably the greatest player in tennis history 7-5, 1-6, 7-6 [10-7] on her second match point in the super tiebreak – do not begin to tell the story of heroism and bravery from both players on such a magnificent stage.

Right from the start, the warmth of the Centre Court crowd poured down from the stands in the direction of Williams, the 40-year-old that has become a global icon for far more than just her incredible tennis achievements.

In the past there has been love, respect, admiration, and fear from so many opponents. But this felt different, a real appreciation of so many years of excellence and fight – and the decision to return after the agony of 12 months ago, when Williams limped off the same court in agony and tears, forced to withdraw with an ankle injury.

Not wishing to have that as her final Wimbledon memory has driven her, but there has been a hamstring problem during her rehabilitation, and three months ago few would have put a penny on her appearing at Wimbledon this year.

Just watching a great champion push themselves beyond all credible limits given her current state of match fitness in the deciding set was both inspirational and almost cruel. Williams was physically spent and in mental turmoil, barely able to control the emotions as points were dug out from seemingly hopeless situations.

But in the end Tan pulled off the win of her life by showing considerable guts of her own - playing a very smart game in the third set by employing drop shots, taking the pace off the ball wherever possible to avoid slug-fests from the back of the court, and waiting for mistakes from the increasingly tiring limbs of Williams. And just enough of those errors came for her to win. 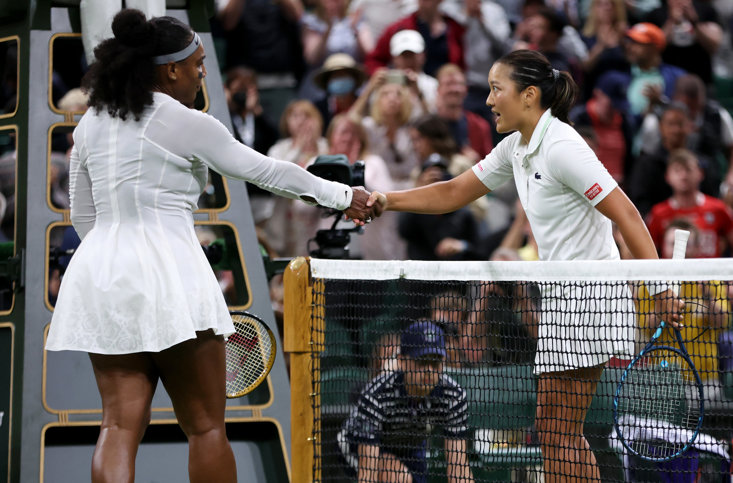 Williams served for the match at 5-4, and having lost the next two games, saved one match point and took it to the tiebreak. But after leading 4-0 in the breaker, Tan roared back for her triumph.

Williams said: “I don’t know what I want to do now. At the moment I am planning for right now. I can’t answer if that is my last singles match here. Who knows where I will pop up next.

“It was really tough. I had some chances to win the first set but it didn’t work out. It was a very long battle – and definitely better than last year. Physically overall I did pretty good, there I was suffering in the last couple of points. There were just a few key points where mentally I maybe just didn’t have it. And if you are playing week-in, week-out you have that match toughness. But I played okay on some of those points, it’s just if I was playing regularly there are points I might not have missed. But it was nice to have that atmosphere and see that crowd.

“I always say don’t be afraid to be different and stand out. I love changing the game, I don’t know how I did it. I have been pretty solid on the grass over my career! If that is my last memory at Wimbledon obviously I am not okay with it – but you can’t change time.

"It makes me want to get on the practice court. And there is lots of motivation to try and be ready for the US Open."

Tan, who is coached by former runner-up Natalie Tauziat, after winning on her Wimbledon singles main draw debut, said: “I am so emotional I don’t know what to say. Serena is a superstar and as a child I watched her so many times on TV. So for this to happen in my first Wimbledon, just wow. I am surprised what I did in this match,

“When I saw the draw I was really scared, it is Serena Williams, the legend. And I wondered how I could win – I thought maybe winning one or two or three games would be good for me. I would like to thank my team and everyone.”

The watching Martina Navratilova, a nine-time Wimbledon singles champion, said: “I am really feeling sorry for Serena, she gave it everything and played so well after a year out. I really thought she was going to win this match in that final set.”

Poland’s Swiatek, 21, was given the honour of opening play on the first Tuesday with last year’s champion Ash Barty having retired earlier this year. And she wasted little time in despatching Fett to move into the second round as she looks for a second straight slam success after winning the recent French Open.

Swiatek said: “It's a huge privilege that I was chosen as the one who is going to be opening. It wasn't obvious because normally Ash would have been opening if she had been here. There are many great champions in the draw. I just felt, like, it's an honour, you know. I'm pretty happy it was a good match from me and a good performance.

“It's amazing for me to have that kind of streak, it just shows how much work we've been putting for every match. I'm pretty happy that I could show consistency because it was always my goal. I didn't know it's going to be possible for me to show that much consistency, and actually to win tournaments. But I'm just really happy and I'm trying to use it the best way possible.

“And I'm just really happy that I made it through because the first rounds are always tricky, especially if it's my first match on grass. I'm happy that I was able to implement all this stuff that we were practising on.”

American teenager Coco Gauff had to work much harder – but also made it through against Elena-Gabriela Ruse 2-6, 6-3, 7-5.