Football
News
Spain have failed to win their opening two games of a European Championship for the first time since Euro '96
Simon Lillicrap
21:53, 19 Jun 2021

Spain once again failed to impress at Euro 2020 as they were held to a 1-1 draw by Poland, who kept themselves in the competition thanks to a Robert Lewandowski header.

Gerard Moreno, Luis Enrique’s only change from their 0-0 stalemate with Sweden, saw his penalty come back off the post as Spain could not find their way through and are now at risk of going out in the group stage if they fail to beat Slovakia.

Meanwhile, Poland will be satisfied with their night's work as Paulo Sousa’s men live to fight another day. An inspired half-time team talk saw Lewandowski score his third goal in a major international tournament with a powerful header, before they survived that penalty scare and late Spanish pressure.

Having amassed just two points from their opening two games, serious questions will now be asked of Luis Enrique and his squad, who clearly do not possess the talent of the side that won back to back European Championships in 2008 and 2012.

Moreno made an impact in the forward line as Luis Enrique looked to freshen up an attack that was stifled against Sweden, as they failed to score despite boasting 85% of the ball. It was his mishit shot that led to the opener as he cut in from the right and shot with his left, but the ball fell into the path of Alvaro Morata who side footed the ball home.

Initially disallowed by the linesman’s flag, VAR overturned the decision and the goal was given. The much maligned Morata now has 17 goals in 33 games for his country while his partnership with Villarreal’s Moreno seemed to give Spain more thrust in the final third.

Moreno saw his free kick from the edge of the box whistle past the post while at the other end Lewandowski was influential for Poland creating chances of their own. He set up Karol Swiderski who inexplicably went for a volley from inside the six yard box when a header would have levelled the scores.

The Bayern Munich striker then missed from close range after Swiderski thumped the ball against the post from the edge of the area. This was the best chance of the first half for Poland and Lewandowski, despite his goal scoring prowess, has still only scored two goals in major tournaments. 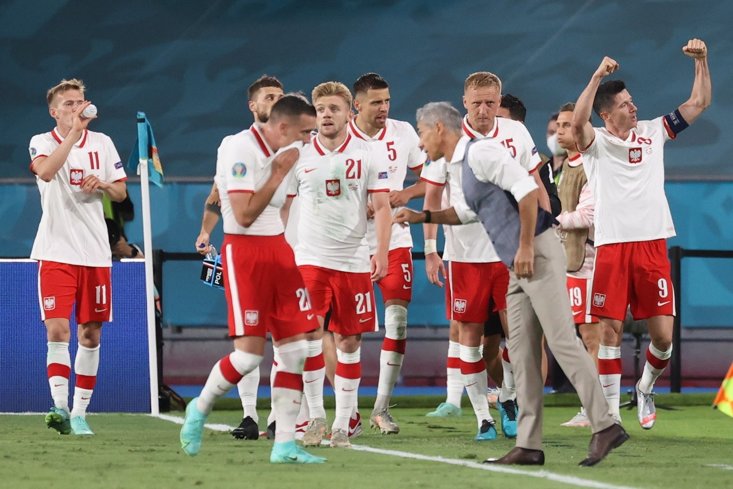 Up the other end Moreno saw his effort hit the side netting after some brilliant work from Jordi Alba down the left, but the Villarreal striker certainly improved this Spain side. Since his debut for the national side in October 2019, he has been directly involved in nine goals for Spain (five goals, four assists), more than any other player for them in this time.

Poland would have been out of the tournament with a loss and Paulo Sousa managed to spark some life into them at half-time. Talisman Lewandowski got his name onto the scoresheet as he bullied Aymeric Laporte in the box and powered home a header to keep his country alive but that hope looked to have been quickly distinguished when VAR awarded Spain an immediate penalty.

Moreno, who scored his penalty in the Europa League final and had a good game, stepped up but saw his spot-kick come back off the post, before Morata stuck the rebound wide. Poland’s aggression threatened to overspill as the game became fragmented but they knew a point would keep them alive, with Sweden to come on the final day.

Ferran Torres came off the bench and put a free header wide of the post and Rodri saw his effort saved by Wojciech Szczęsny, who was far from comfortable in the Poland goal. Morata went close late on but the former Arsenal keeper was brave to smother the ball at his feet from close range, as Spain’s attack was again left frustrated.

Spain have never been the best starters at tournaments, they lost to Switzerland in their opening game of the 2010 World Cup they went on to win, but they will need to dramatically improve if they are to make inroads into the knockout stages. Work to do, while Poland live to fight another day thanks to their main man.