Tennis
News
The underdog shocked the world in New York and has inspired a generation
Simon Lillicrap
08:00, 19 Dec 2021

Barring a massive surprise, Britain’s teenage sensation Emma Raducanu will lift the BBC’s Sports Personality of the Year award on Sunday and become the first female recipient since Zara Phillips won in 2006. A 15 year wait between female winners seems outrageous given the talent that this country has produced, but now, that long wait looks to be coming to an end.

Raducanu, at just 18-year-old, achieved the greatest underdog story of the year as she became the first qualifier in the sport’s history to win a Grand Slam title as she beat Canada’s Leylah Fernandez 6-4 6-3 in New York. Before the tournament, she ranked 150th in the world having taken her first tentative steps at Wimbledon in the summer, but nobody predicted that in the Autumn, a new British sporting superstar would emerge.

Even the youngster herself had more realistic expectations, with her flights home from the Big Apple booked for after the qualifying rounds. As it turned out she would miss that flight by about two weeks as she went on a dominant run, which saw her win ten straight matches without dropping a set.

It was a run of performances that saw her win every set without the need for a tie-break. For a woman of just 18-years-old, she showed incredible maturity and composure and given the unwarranted criticism she came in for after her withdrawal from Wimbledon, she silenced all of her criticism in the most emphatic fashion.

Her win in the US was a huge moment for British sport, as Channel 4 paid for the rights to broadcast the final live, 9.2m people tuned in to watch her lift the famous silver trophy, which is a bigger audience than the BBC got for their coverage of Wimbledon. This huge audience, and the fact that her crowning glory was so easily accessible means that her long-term impact on young boys and girls hoping to get into the sport is already absolutely seismic. 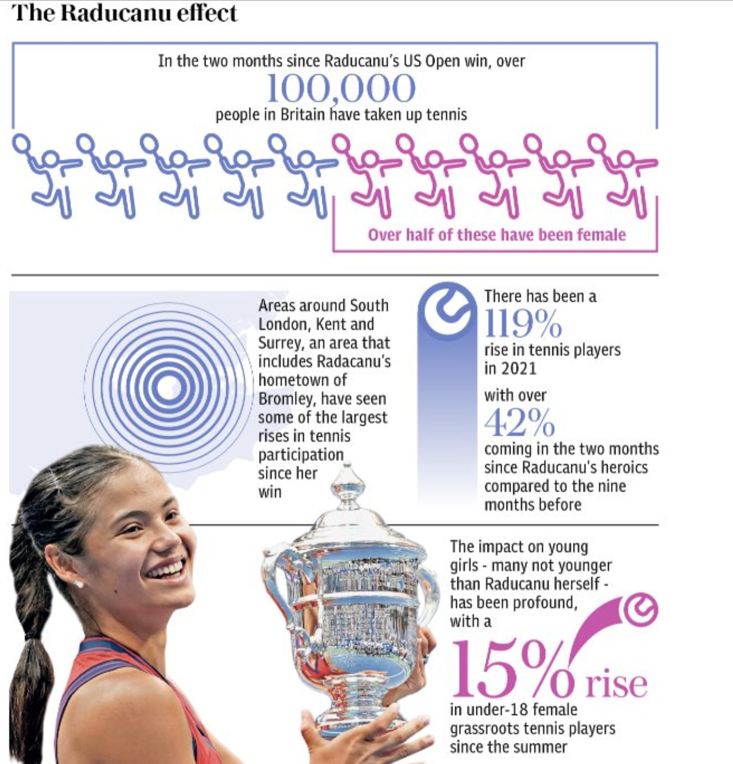 Graphic from The Telegraph

Not since Virginia Wade in 1977 has Great Britain boasted a female Grand Slam champion and given this year Johanna Konta also retired, this country was in desperate need of a new female superstar. She might be young, but in many ways her underdog story has already endeared her to the entire nation.

And her multi-cultural background makes her the perfect modern British sportsperson. Just like some of our finest sportspeople of the past such as quintessentially British cyclist and five-time Olympic champion Sir Bradley Wiggins, cricketing icon Kevin Pietersen and Euro 2020 star Raheem Sterling, Raducanu wasn’t born on these shores - but she was drawn here at a young age.

Now she proudly represents the country she fell in love with on a world stage. Now she is a US Open champion. Tonight, she should become Sports Personality of the Year at the age of 19.

x
Suggested Searches:
Manchester United
Liverpool
Manchester City
Marcus Rashford
Premier League
More
tennis
Top Seed Daniil Medvedev Is The Insanely Talented 'Bad Guy'...
There’s always something for Daniil Medvedev to pick at. This time, after reaching the Australian [ ... ]
tennis
44 Years On, History Beckons For Ashleigh Barty At Australian...
She was crowned French Open champion in 2019. In 2021, she tasted success on the famous green grass [ ... ]
tennis
Andy Murray's Everlasting Impact Goes Way Beyond The Tennis...
The headlines today following Andy Murray’s round two Australian Open exit were all too predictable. [ ... ]
tennis
Australian Open Day 4: British Nightmare As Raducanu And Murray...
Day four of the Australian Open saw the Brits back in action with mixed results. Andy Murray exited [ ... ]
tennis
Australian Open Day 3: Defending Champ Naomi Osaka And Rafa...
After the success of the Brits yesterday in Melbourne, today we saw some of the best players in the [ ... ]
tennis
British Tennis Stars Flourish Down Under As Raducanu And Murray...
One thing that is already guaranteed for Britain’s tennis stars is that they have done a better [ ... ]
tennis
Murray Has Shown A Willingness To Adapt And Evolve Ahead Of...
Three years ago in Melbourne, a disconsolate Andy Murray addressed the media and struggled to convey [ ... ]
tennis
Great Britain See ATP Cup Semi-Final Hopes Dashed After Canada...
Great Britain saw their hopes of reaching the ATP Cup semi-finals dashed by Canada on Thursday at the [ ... ]
tennis
Defending Champion Naomi Osaka Returns To The Australian Open...
Japanese tennis star Naomi Osaka just wants to have fun and who can blame the former world number one, [ ... ]
tennis
Why The Australian Open Might Be Better Off Without Federer,...
Aussie tennis star Nick Kyrgios has said that no ‘Big Three’ of Novak Djokovic, Roger Federer [ ... ]
tennis
A Perfect Blend Of Youth And Experience Make Up Our Tennis Stars...
The new tennis season is fast approaching, just a few short weeks after the previous campaign ended, [ ... ]
tennis
Andy Murray Can Roll Back The Years When He Returns To The Australian...
With 2021 drawing to a close, not only are we about to enter a new year but it signals the imminent [ ... ]
tennis
The Greatest Qualifier & The Greatest Ever? The Best Tennis...
The tennis landscape is beginning to change. Roger Federer and Serena Williams, legendary performers [ ... ]
tennis
Emma Raducanu Named BBC Sports Personality Of The Year For 2021
Emma Raducanu has been named the BBC Sports Personality of the Year after her incredible breakthrough [ ... ]
tennis
Daniil Medvedev Leads Russian Tennis Federation to Davis Cup...
Daniil Medvedev brought an extraordinary personal and team year of success to an end by leading the [ ... ]
tennis
WTA Pull Women’s Tennis Tournaments From China Over Peng Shuai...
The governing body of women’s tennis sent the strongest possible message to Chinese authorities [ ... ]
tennis
Johanna Konta Retires Having Carried The Baton For British Tennis
Johnna Konta, the former British number one and Wimbledon semi-finalist, has called time on her tennis [ ... ]
tennis
Great Britain Lose In Agonising Fashion To Germany In Davis...
Great Britain saw their Davis Cup hopes dashed in Innsbruck on Tuesday night in agonising fashion as [ ... ]
tennis
Salisbury And Skupski Take GB Into Davis Cup Quarters After...
Great Britain clinched their place in the Davis Cup quarter-finals on Saturday afternoon with a hotly-contested [ ... ]
tennis
Cameron Norrie And Dan Evans Get GB Davis Cup Campaign Off To...
Great Britain got their Davis Cup campaign off to a winning start on Saturday by taking the opening [ ... ]
tennis
Zverev Wins ATP Finals Title To Cap Incredible 2021
Alex Zverev stormed to a second ATP Finals title in grand manner, beating world No2 and defending champion [ ... ]
tennis
Garbine Muguruza Becomes First Spaniard To Win WTA Finals
Garbine Muguruza is the first Spanish woman to win the WTA Finals end-of-season tournament after a straight [ ... ]
tennis
Norrie Ready For First Clash With Djokovic Despite Opening Defeat...
After receiving a late call-up as an alternate for his debut appearance at the glamorous ATP Finals, [ ... ]
tennis
WTA Finals SF Preview: Debutants Seize Their Moment In Mexico
The WTA Finals debutants have certainly grabbed their opportunity this year. From the semi-final line-up [ ... ]
tennis
Is It Time For Roger Federer To Consider His Retirement From...
Roger Federer is not only one of the greatest tennis players of all time, but one of the greatest athletes [ ... ]
tennis
ATP Finals Preview: Novak Djokovic Bidding To Match Roger Federer...
No London, no Roger Federer, and no Rafael Nadal – but the Nitto ATP Finals in its new home of [ ... ]
tennis
Raducanu’s Promising Partnership With Beltz Will Add Stability...
She promised that she would have a coach in place by the end of the year and now it is confirmed, with [ ... ]
tennis
Djokovic Eclipses Sampras, But Why Isn't He Loved Like Nadal...
Novak Djokovic just can’t stop breaking records as he looks to eclipse the fellow greats of this [ ... ]
tennis
Australian Open Up In The Air As Host Nation Remains Divided...
The Australian Open is just under three months away and there is still doubt over what is going to happen [ ... ]
tennis
Emma Raducanu Needs Patience And Breathing Space To Reach Full...
Despite having already won a Grand Slam title, rising tennis star Emma Raducanu has stressed that [ ... ]