Tennis
News
The absence of Matteo Berrettini in their quarter of the draw makes this arguably one of the most important matches of their lives
Hector Nunns
13:35, 01 Jul 2022

Any Wimbledon third-round match is big, a chance to get into the last 16 of the most famous tournament of them all. And any clash between Stefanos Tsitsipas and Nick Kyrgios, two of the biggest box office draws in men’s tennis, at a grand slam is going to be huge with both desperate to win one of the majors for a first time.

But the extra absence of Queen’s champion and last year’s runner-up Matteo Berrettini – who had to withdraw with Covid – in their quarter of the draw makes this arguably one of the most important matches of their lives for both players. Opportunity is not so much knocking, as caving the door in with a battering ram.

Tsitsipas, the 23-year-old from Greece, became the youngest player for 18 years to win the season-ending ATP Tour Finals in 2019, has also won nine ATP titles and reached the final of the French Open in 2021. The natural next progression would be to add a grand slam to his CV.

And then there is the enigma wrapped in a conundrum that is Aussie Kyrgios. The 27-year-old is one of those sportspeople that clearly gets irritated being continually labelled as an underachiever and someone who has not fully delivered on their ability. And yet on so many occasions the volatile but brilliant world No40 really doesn’t help himself.

The first two rounds at Wimbledon this year have been the Kyrgios career in microcosm. There were embarrassing outbursts at the umpire, a lineswoman and a fan in the crowd, in whose direction he was caught and owned up to spitting. This has cost him a $10,000 fine, by no means the first of his controversial tennis life for all manner of transgressions.

And yet there remains this distant suspicion that if Kyrgios could keep it together for seven matches – a big challenge, since seven minutes has proven tricky – then he could even lift the famous gold trophy, with a devastating serve, range of shots and sheer invention and off-the-cuff ability to trouble any opponent. 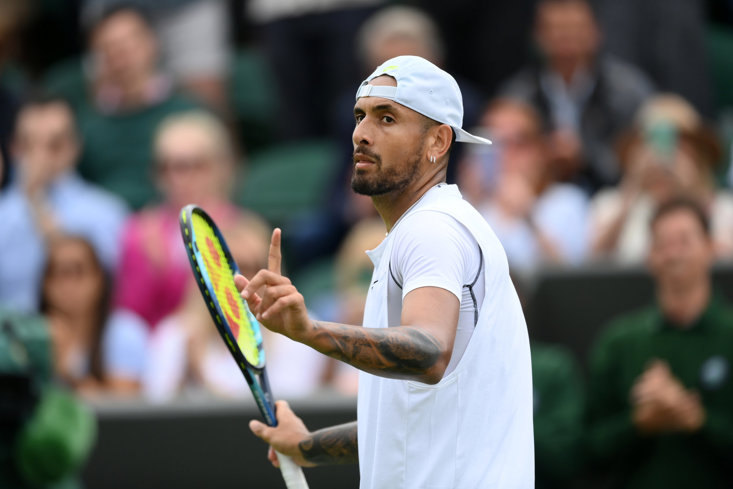 He will have to hope that the consummate professionalism of the older Wimbledon line judges carries the day against Tsitsipas. It is unlikely they will have appreciated his comments that only younger people should do that job, as their eyesight is always better.

If a tirade against officialdom and poor on-court behaviour was the lasting memory of his first-round five set win over Brit Paul Jubb – in which, perhaps not uncoincidentally he played badly – the mark of his second-round demolition of the very capable Filip Krajinovic was a humbling of his opponent with an absolute masterclass of aggressive grass-court tennis, with the mouth firmly zipped and barely a peep from former quarter-finalist Kyrgios throughout the contest.

This time he vented his anger afterwards at the media following all the criticism and mere reporting of what he had said and done earlier in the week – believing that he is at the centre of a witch-hunt, and challenging the assembled throng to find anything wrong with his performance or behaviour in his second match. Which no one could, to be fair.

Krygios, who leads the head-to-head 3-1 including a recent win on grass in Halle, is on record as saying he can beat anyone in the draw at Wimbledon, and that this event represents by far his best chance of winning a slam. But Tsitsipas, who has been picking the brains of Kyrgios’s fellow Aussie and former finalist Mark Philippoussis, is ready for the test.

Tsistsipas said: “Nick has more matches on me in these courts. He claims to like grass, I think his game is good for the grass. I am definitely thrilled to be facing him. I respect him a lot, on the court, what he's trying to do. Although he has been a little controversial in the past, I think he's playing good tennis.

“I'm going to try and concentrate on doing my thing and pay attention to my own game from start to finish. Hopefully I can stay there and do something great, have a great competitive match against him.

“After Halle recently on grass, I’ll just go out on the court hoping to have a good match, hoping to be able to get balls back, be precise with your shot selection. That comes with good preparation. The rest will hopefully follow if you're able to approach that with the right mindset. Let's just say it's a different day, it's a different match.

“I was more than happy to have Mark next to us these past few days. I don't really feel there's a negative side to it. He's an absolutely great guy. He has a very good visual of the game. I mean, he has played hundreds of matches himself. He has been faced with hundreds of scenarios and situations on court.

“He knows the tennis psychology part, let's say, a bit more than probably my father who, as a coach, hasn't played on the tour, but obviously has other strengths as a coach. That can also contribute to one's, let's say, perspective on the court and help him increase his chances of what he's trying to do out there.”