UFC Heavyweight Champion Francis Ngannou will clash with Interim Champion Ciryl Gane this Saturday in a blockbuster main event at the Honda Center in Anaheim, California. The heavyweight throwdown will headline UFC 270, the company’s first pay-per-view card of 2022. The card also features the trilogy fight in the rivalry between UFC Flyweight Champion Brandon Moreno and Deiveson Figueiredo.

Ngannou and Gane’s meeting in the main event is long-anticipated, with the two previously working together as sparring partners. The fight is attractive primarily due to the stylistic match-up between the pair. While the unification of the main title and the interim version is a handy marketing pull, this would be an excellent piece of matchmaking even without the belts.

Gane can hit, but Ngannou’s power is on another level. ‘The Predator’ holds the record for the hardest punch ever measured, which he broke at the UFC Performance Institute in 2017. 12 of the champion’s 16 victories have come by way of knockout, and his extraordinary power has seen him bestowed with Mike Tyson’s old ‘Baddest Man On The Planet’ moniker.

Ngannou is fighting for the first time since winning the belt he won from Stipe Miocic last March. In that fight, Ngannou avenged his 2018 defeat to the Ohio fighter with a second-round knockout win. That statement win was the Cameroon-born knockout artist’s fifth consecutive stoppage victory, but he will have his work cut out if he wants to make it six.

Cyril Gane is unbeaten, with a perfect 10-0 record. His last bout, where he claimed the Interim Championship, was a third-round TKO over former Ngannou conqueror Derrick Lewis. While the Frenchman can bang, his skills are more well-rounded than the trigger-happy UFC Heavyweight Champion. Gane is an unbeaten Muay Thai kickboxing champion who also displays impressive wrestling. ‘Bon Gamin’ has also displayed submission acumen, halting three opponents on the mat. While Ngannou will be keen to take his opponent to war, we might see a more cerebral approach from Gane. 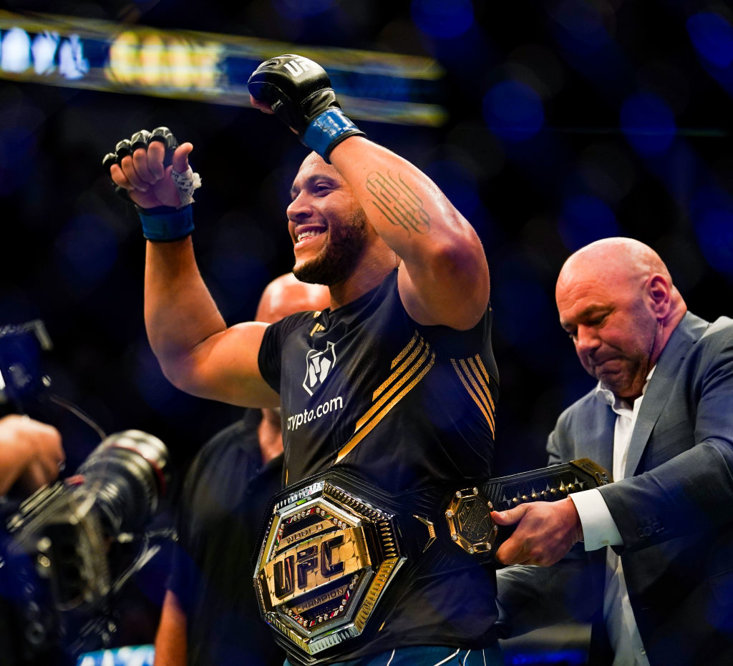 Both men will enter the octagon with a belt, but only one can leave as champion

The evening’s other big world title fight will bring to a close the rivalry between UFC Flyweight king Brandon Moreno and Deiveson Figueiredo. They first met at UFC 256, when Figueiredo was champion. They won Fight of the Night honours on that evening, as a see-saw battle ended with the Brazilian retaining his title due to a majority draw. Moreno earned a Performance of the Night bonus for his dominant display in the rematch, winning the belt via rear-naked choke in the third round to take the title. Now the pair will settle their differences once and for all in California.

UFC are certainly starting 2022 with a bang, and the action doesn’t end with the title bouts. Welterweight Michel Pereira will look to extend a three-fight unbeaten run against André Fialho, while Cody Stamann has his work cut out against Said Nurmagomedov. Rodolfo Viera, coming off a Performance of the Night for his win over Dustin Stoltzfus, faces a tricky middleweight encounter against Wellington Thurman.

Ultimately though, the main talking point is likely to emerge from the main event. The UFC Heavyweight Championship is the most prestigious prize on offer in MMA, and whoever leaves the Octagon wearing it on Saturday night will have earned it the hard way.