Héctor Luís Camacho Matías had been fighting since he was five years old. In childhood he had to hit his father, also called Héctor, in failed attempts to stop the physical abuse inflicted upon his mother, Maria.

“He had a unique ability to detach himself from emotionally charged incidents that would devastate some people… though he showed anger and laughter, he rarely shared his pain. Often his smile deflected the hurt.” Héctor ‘Macho’ Camacho’s life story isn’t an easy read, but it is a worthy one.

In his new book from Hamilar Publications, experienced boxing writer Christian Giudice takes the reader along Camacho’s bumpy, exhilarating, but ultimately tragic ride from a shack in Bayamon, Puerto Rico to Spanish Harlem, to global stardom, to that Mustang passenger seat in San Juan, where shots pierced through the night of late November, 2012. Throughout this, the first comprehensive biography of Camacho’s life, Giudice speaks candidly about the boxer and the man in and out of the ring, via exclusive interviews with Sugar Ray Leonard, Freddie Roach, and Héctor Camacho Jr.

Héctor Camacho’s story and persona is as magnetic in death as it was in life. He was the pugilist who defeated Roberto Durán twice, and knocked Sugar Ray Leonard into permanent retirement. But his fight was not purely isolated to the ring. 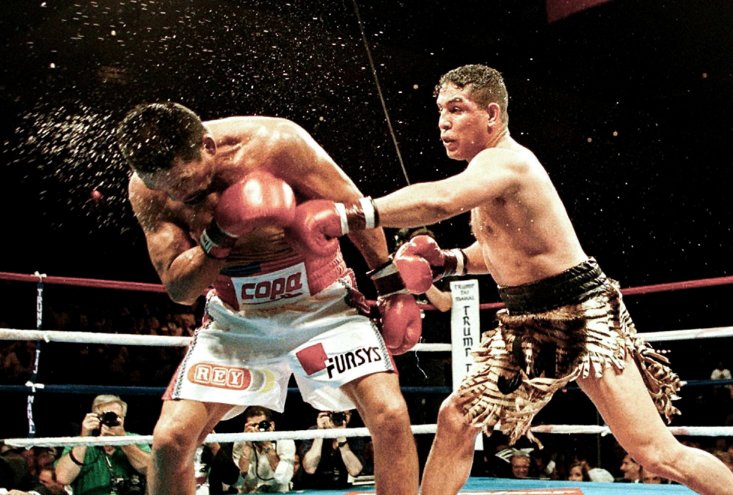 Like many - if not most - brilliant boxers, Camacho had to fight with the nation both behind his back in support, and on it with expectation, a boost and a burden. It was a status he had had to strive for, in his early days of jostling for the spotlight with Wilfred Benitez, and one he was unwilling to go for. Puerto Rico was as important to him on fight night as it was his gloves. He was fighting for his country and hard-bitten countrymen, with Guidice selecting a particular resonating quote from one member of Spanish Harlem, “When Hector fought, we all won.”

But his flamboyant nickname became a millstone.

“By internalising his own problems, he believed he could push through any problems,” Guidice tries to rationalise, “He was the Macho Man.”

With a foreword by Carlos Acevedo, author of Sporting Blood, Guidice’s excellently written and researched narrative attempts to respect Camacho’s legacy as a boxer, and as a man who punched his way out of the slums, but had to do so for so long, the only eventuality was to concede to tiredness and could punch no more, with the murky unforgiving drugsworld forcing another to descend into the depths.

“Some fighters turned to drugs because they could not fill the hole that boxing left, and drugs provided that thrill again,” writes Guidice in an almost vindicating obituary, “Others were introduced to drugs because their stature and lifestyle allowed them to afford such vices. But Hector was different: he grew up with drugs. They were not just part of a hellish phase but a way of life, ingrained in the environment in which he was raised.”

Héctor Camacho has now been eight years gone. His legacy is difficult, but as a lesson it is important.