2022 already promises so much on the boxing front. Saul ‘Canelo’ Alvarez is set to move up to cruiserweight and challenge WBC champion Ilunga Makabu. Katie Taylor has Amanda Serrano and Jessica McCaskill on the hunt for superfights. Tyson Fury is set to hit the ring in March, with Oleksandr Usyk’s rematch with Anthony Joshua to follow.

These are the incredible moments we expect in the new year, but there are plenty more fighters who should be on your radar. Here are our picks for the 2022 Fighters To Watch.

We didn’t see much of the highly-touted ‘KingRy’ in 2021, but what we did see was highly impressive. Last January, the Californian climbed off the canvas to take out talented Brit Luke Campbell in seven rounds. The big win over a former world title challenger was expected to propel Garcia into contention for world honours, but injuries and mental health struggles would keep him sidelined for the rest of the year.

A refreshed Garcia has targeted 2022 to make waves in the lightweight division, and he is well-placed to do so. The Californian is the number two ranked lightweight in the world with the WBC, with Vasiliy Lomachenko just above him. The Ukrainian is expected to meet George Kambosos Jr for his unified crown, which would leave WBC boss Devin Haney in need of opposition. A fight against Garcia would be unbelievably exciting, and sell a lot of tickets.

You could argue the WBO super featherweight champion just had a breakout year, but Shakur Stevenson might be set for another. ‘Fearless’ scored his best career win in October, stopping world champion Jamel Herring in ten rounds. Already a two-weight world ruler at the tender age of 24, the sky's the limit for the Olympic silver medalist.

Unification fights with Oscar Valdez and Kenichi Ogawa would be outrageously exciting, and when his work at 130 pounds is done, there is a world of opportunities in the stacked lightweight division. 2022 could be the year everyone is talking about Shakur Stevenson. 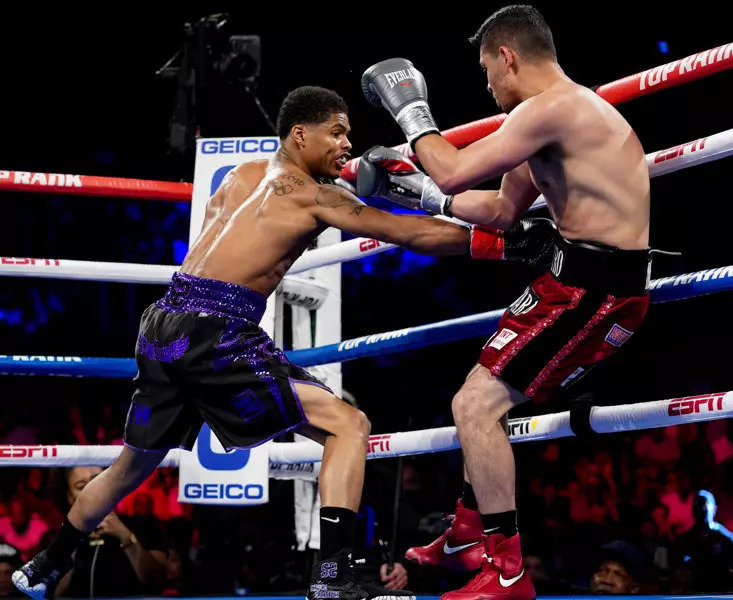 Amanda Serrano and Katie Taylor are the names on everybody’s lips when it comes to women’s boxing. But IBF, WBO and The Ring super featherweight champion Mikaela Mayer warrants a mention alongside the very best fighters in the sport.

A decorated amateur, Mayer has an unblemished 16-0 record since turning pro in 2017. After scoring a signature win in her unification fight with Maiva Hamadouche in 2021, we could be on the cusp of a big year in the Mayer calendar.

While the top heavyweights wrap themselves in arbitration, rematch clauses and red tape, there is a volcano upon which they stand that is waiting to erupt. ‘El Animal’ is coming.

The hard-hitting Croat is 14-0, and has smashed through world title challengers Kevin Johnson and Eric Molina, unbeaten prospects Marko Radonjic and Emir Ahmatovic and durable veterans Rydell Booker and Amir Mansour on his way into the world rankings. Hrgovic is listed by the WBC and the IBF, and it won’t be long before he’s knocking on the door for a shot at those belts. Watch your back, Tyson and Oleksandr.

Having a famous father in boxing is no guarantee of success. For every Cory Spinks there is a Marvis Frazier. But Tim Tsyzu, son of the iconic former light welterweight king Kostya, seems to be going the right way about things.

‘The Soul Taker’ is unbeaten in twenty fights, has knocked out fifteen of his foes, and rattled off three wins in a busy 2021. World-ranked by three of the major governing bodies, Tsyzu is the number one contender to Brian Castano’s WBO light middleweight belt. 2022 could be the year that the Tsyzu family joins the exclusive club of world championship father and son teams.

x
Suggested Searches:
Manchester United
Liverpool
Manchester City
Marcus Rashford
Premier League
More
boxing
The Baddest Men On The Planet: Francis Ngannou And Ciryl Gane...
UFC Heavyweight Champion Francis Ngannou will clash with Interim Champion Ciryl Gane this Saturday in [ ... ]
boxing
When Roberto Duran Proved He Was Boxing's Greatest Ever Lightweight
Weeks away from immortalising himself as the greatest lightweight to ever step foot inside the [ ... ]
boxing
Rematch Of 2019’s Fight Of The Year Inbound? Five Boxing Stories...
We could be getting a sequel to 2019’s Fight of the Year, Francis Ngannou is eyeing up Tyson Fury [ ... ]
boxing
Everything You Need To Know About Gary Russell Jr Vs Mark Magsayo
WBC featherweight champion Gary Russell Jr will fight for the first time in two years on Saturday, as [ ... ]
boxing
On This Day: Roy Jones Jr Turns On The Old Magic Against Felix...
Boxers don’t always face off when we want them to. Unlike other sports, where league systems or [ ... ]
boxing
As He Faced The Son He Cast No Shadow: Chris Eubank Jr. Must...
Chris Eubank Jr. takes on Liam Williams in the year’s first big domestic dust-up next month at [ ... ]
boxing
''I Shook Up The World!'': The Moment Cassius Clay Truly Became...
On what would have been his 80th birthday, it is only appropriate to pay tribute to the cultural icon [ ... ]
boxing
Terence Crawford Sues Top Rank, Five Boxing Stories You Might...
It’s been another busy week in the world of boxing which has seen lawsuits, new signings and some [ ... ]
boxing
Heavyweight Frazer Clarke To Make Professional Debut On Khan...
Frazer Clarke will make his professional, Sky Sports and Boxxer debut on the undercard to the highly-anticipated [ ... ]
boxing
War Of The Worlds: When Boxers And MMA Fighters Collide
Boxing and UFC’s world heavyweight champions have been exchanging fighting talk on social media [ ... ]
boxing
Brand New Heavies: There's Big Men Beyond Fury, AJ, Usyk and...
The heavyweight division is as stacked as its been at any point since the 1990s. In Tyson Fury and Oleksandr [ ... ]
boxing
World Titles And Returning Kings: 2022 Could Be A Year Of Welter...
The first big welterweight clash of the year is close to being confirmed, as WBC and IBF champion Errol [ ... ]
boxing
On The Regular: The Ridiculous History Of The WBA Regular Heavyweight...
If you’re a long-time boxing fan, you’d be forgiven for thinking the abbreviation WBA stands [ ... ]
boxing
Lawrence Okolie To Move To Heavyweight? Five Boxing Stories...
It’s been a busy first week of 2022 in the world of boxing with Lawrence Okolie looking to mount [ ... ]
boxing
Undisputed Showdown With Fury Would Be Historic Night For Boxing,...
Unified heavyweight champion Oleksandr Usyk could face Tyson Fury in a unification clash instead of [ ... ]
boxing
The Sportsman Boxing Power Rankings: January
The Sportsman Boxing Power Rankings is a monthly series ranking boxers on a number of factors to determine [ ... ]
boxing
Floyd Mayweather Lines Up Exhibition With YouTuber Money Kicks
50-0 boxing icon Floyd ‘Money’ Mayweather is set to return to the ring once again in 2022. [ ... ]
boxing
Ortiz vs Martin Can Prove Boxing Doesn't Have To Be Elite To...
Exciting sport is not solely predicated on the elite meeting the elite. While clashes of the world’s [ ... ]
boxing
Boxing's Biggest And Best Knockouts Of 2021: Featuring Fury,...
It’s been a busy half-year of boxing for me, finally getting back out on the road after the various [ ... ]
boxing
Andy Ruiz Jr Next For Tyson Fury? Five Boxing Stories You Might...
The fights may have slowed down to give everyone a Christmas break, but boxing’s powerbrokers [ ... ]
boxing
Five Fights We Want In 2022: Will We Finally See Fury Vs AJ...
What a year it’s been inside the squared circle in 2021. We saw Saul ‘Canelo’ Alvarez [ ... ]
boxing
Where Are They Now? The 2005 ABA National Championship Winners
The roll call of the 2005 ABA National Championship is utterly stacked with talent. The 119th iteration [ ... ]
boxing
Her Ring Too: Women’s Boxing Set For Bumper 2022 After Thriving...
2021 was a banner year for women’s boxing. We saw thrills and spills, upsets and dominations. [ ... ]
boxing
Make Boxing Day 'Boxing' Again: The Fights To Watch This 26th...
Your internal organs are 60% turkey, your Nan made you watch the Queen’s speech and you had to [ ... ]
boxing
Move Over Die Hard, Rocky IV Is The Ultimate Underrated Festive...
“Is Die Hard a Christmas film?” It’s a debate that has raged and swirled around this [ ... ]
boxing
Jake Paul Vs Former Middleweight Champ? Five Boxing Stories...
Errol Spence will find himself in an early unification fight next year, Triad Combat is somehow returning [ ... ]
boxing
The Sportsman Boxer Of The Year - Saul 'Canelo' Alvarez
It’s been quite a year in the squared circle. Trilogies have reached their brutal conclusion, [ ... ]
boxing
The Sportsman Boxer Of The Year - Number 2: Oleksandr Usyk
It’s been quite a year in the squared circle. Trilogies have reached their brutal conclusion, [ ... ]
boxing
The Sportsman Boxer Of The Year - Number 3: Tyson Fury
It’s been quite a year in the squared circle. Trilogies have reached their brutal conclusion, [ ... ]
boxing
UFC Legends, Boxing Superstars Or His Own Brother: What’s Next...
Jake Paul moved to 5-0 (4) with a sensational sixth round stoppage of Tyron Woodley on Saturday night. [ ... ]