The middleweight star returned to the ring in May for the first time in almost 18 months, with a unanimous decision over Manchester’s Marcus Morrison providing some much-needed rounds.

Eubank Jr belongs at the top of the middleweight division, of that there is no doubt, although his last world title fight was over three years ago as George Groves outboxed him in their February 2018 World Boxing Super Series Bout.

Even the most generous of fight fans would struggle to argue that the IBO belt that Eubank Jr won against Renold Quinlan in 2017 is recognised as a genuine world title. It falls outside of the four main organisations in the WBA, WBC, IBF and WBO, and even after winning it back against James Degale in 2019, world honours still elude the 30-2 man. For someone of Eubank Jr’s pedigree and undeniable punching power, it is borderline unforgivable to have only been involved in one world title fight during his 10-year career, let alone never win one.

Has he been mismanaged? That case can certainly be made, with his father Chris Eubank Sr seemingly meddling in his early days more than he perhaps should have.

Just look at the career of bitter rival Billy Joe Saunders. Two fights after their 2014 grudge match that saw Eubank Jr on the wrong side of a split decision, Saunders won the WBO world title with a majority decision against Andy Lee. He would make three defences, including a career best performance against fearsome Canadian David Lemieux, before stepping up to super middleweight and becoming a two-weight world champion with a shutout against Shefat Isufi.

Another two defences would follow, before a life changing bout against the biggest name in boxing in Saul ‘Canelo’ Alvarez.  Saunders painfully lost that bout after fracturing his eye socket, but the fact remains that he has won world titles in two divisions, and fought the undisputed superstar of the sport, while Eubank Jr has had just one title shot in that time. 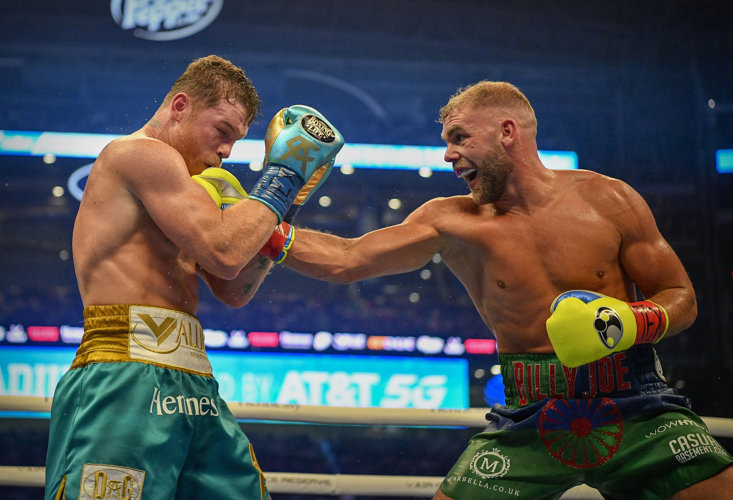 Of course, his father was a world champion himself, and is a legend of British boxing, so it is only right that he uses his experience to guide his son’s career. However, the accepted view is that the build up to the now 31-year-old’s fights were becoming a bit of a circus, and he wasn’t being given the respect that his ability deserved.

There has been a recent shift in this regard. Sr has taken a step back, and Jr is now being trained and guided by middleweight royalty in Roy Jones Jr. The American won world titles in four weight classes from middleweight all the way up to heavyweight, so knows all the tricks of the trade that Eubank Jr will need if he is to finally win a world title of his own. One thing seems certain, at least according to his new promoter in Sauerland, he will get his shot sooner rather than later.

The Brighton boxer is the current WBA ‘interim’ champion, meaning that he is first in line to have a crack at Ryota Murata’s ‘super’ title or Erislandy Lara’s regular belt, although Eubank Jr himself has made no secret of his desire for a fight with IBF champ Gennadiy Golovkin. Whichever route his team chooses, promoter Sauerland is promising a huge end to the year.

“Eubank has got a massive, massive second half of this year,” he insisted. “We're sitting down now to work out the plan for the rest of the year.

“Is it one more fight, let's say at a domestic level? Do we go straight into the world title fight?

“There are lots of different discussions going on at the moment. Expect a big, big announcement in the next week to 10 days, I would say."

Not one to hold back with his passion for making big fights, Sauerland made one final promise.

"There is definitely world title action this year."

Eubank Jr is already a household name. His father has made sure of that, and his appearances on Channel 4 show Gogglebox will do his popularity no harm with the mainstream audience.

However, after a decade in this most unforgiving of sports, the time has arrived for him to fulfil his potential and finally wrap a world title belt around his waist. With the likes of Golovkin, Demetrius Andrade and Jermall Charlo currently occupying the remaining belts at middleweight, it’s a huge ask.

That may well suit Eubank Jr, who makes no secret of his desire to do things the hard way but with his 32nd birthday fast approaching, we’re entering last chance saloon territory.

Can he follow in his father’s footsteps and win a world title? Something tells us that it’s going to be particularly entertaining finding out.