Football
News
Andriy Shevchenko's side have lit up this tournament with some free-flowing football
Gary Maiden
15:52, 17 Jun 2021

Andriy Yarmolenko scored the opener and assisted the second as tournament entertainers Ukraine registered their first win with a 2-1 triumph over a brave North Macedonia.

Two goals to the good at half time following strikes from Yarmolenko and Roman Yaremchuk, the North Macedonians pulled one back early in the second half when Ezgjan Alioski followed up his own saved penalty before Ruslan Malinovskiy missed a late penalty to set up a nervy ending.

Following on from their enthralling 3-2 defeat to the Netherlands, Andriy Shevchenko’s men are rightly being described as the tournament entertainers, and this win gives them a serious chance of staying in the Euros beyond the group stage. In fact, only Italy have scored more goals in the tournament than Shevchenko's side at the time of writing.

The former Chelsea forward’s men dominated a first half that saw North Macedonia fail to register a single shot on goal, with them managing just five touches in Ukraine’s area.

Ruslan Malinovskiy wasn’t too far away from opening the scoring inside 10 minutes when his skewed effort forced the busy Stole Dimitrievski into a smart save. The Macedonians, who treated the 13,000 in attendance to one of the most bizarre pre-match training drills you’re likely to see, enjoyed a short spell of attacking play that saw Eljif Elmas hit the side netting when he ought to have at least tested Georgi Bushchan in the Ukraine net.

A quiet spell quickly came to an end when Yarmolenko beat the offside trap to force a great save out of Dimitrievski, with the West Ham man visibly frustrated not to see his effort hit the back of the net, however his mood was instantly lifted one minute later when the 31-year-old met an Oleksandr Karavaev flick from a corner and tapped home to give his nation the lead.

It was Yarmolenko’s third goal in as many games for Ukraine, and begs the question why a player of his undoubted quality is used so sparingly at West Ham. 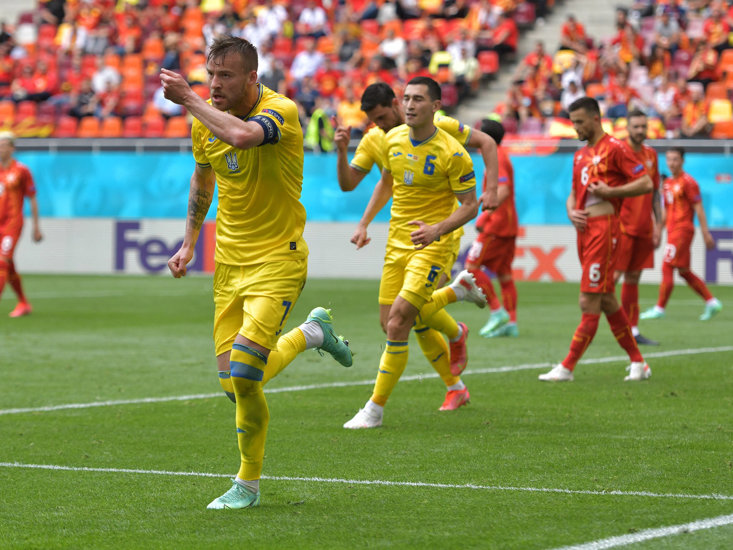 Yarmolenko has made a great impression for Ukraine at Euro 2020

He was involved again just five minutes later, as his perfectly weighted pass found Yaremchuk, who had just remained onside to slot home and double Ukraine’s lead. The Gent man has also scored in three consecutive Ukraine outings, with the Yarmolenko and Yaremchuk becoming the first pairing in Euros history to score in both of their side’s opening two matches.

Yarmolenko’s importance to this side is beyond question, with the former Borussia Dortmund man now scoring or assisting four of Ukraine’s six goals at the European Championships.

Their celebrations were short lived, or so we thought, when Macedonian legend Goran Pandev raced in behind to send a glorious chip over the onrushing Bushchan. Another fairy-tale moment was taken away from the 37-year-old, who became the second-oldest player ever to score at a European Championship with his strike against Austria, when his cheeky finish was correctly ruled out for offside.

North Macedonia came out for the second half full of positivity, and should have halved the deficit when Arijan Ademi shot low at the near post to force a fine save from Bushchan. In reality, it was an effort that should have seen the net bulge.

Ukraine’s lead was in fact halved just five minutes later when Karavaev brought down Pandev inside the area following an acrobatic save that saw a long-range effort tipped onto the woodwork. Leeds United star Alioski stepped up to take the spot kick, and although his initial effort was saved, he reacted superbly to follow up and hand his nation a crucial lifeline.

Any Ukrainian nerves should have been settled when Viktor Tsygankov found himself one on one with the keeper only to drag his effort wide of the post. With just over five minutes left on the clock, Shevchenko’s troops were given an even better chance to put the result beyond doubt, when VAR looked into a potential handball and awarded the game’s second penalty. Malinovskiy stepped up only to see his spot kick saved, which is incredibly the fourth missed penalty out of five taken so far in the tournament.

In the end, Ukraine held out for a crucial three points in another thrilling encounter and for the sake of the tournament, let’s hope that they make it through to the knockout stages.

A win here in Bucharest gives them an excellent chance of doing just that.