21-year-old Iga Swiatek is now a two-time French Open champion after an imperious 6-1,6-3 win over American teenager Coco Gauff in Paris. That takes the Pole’s unbeaten run to 35 matches, a streak that has seen her pick up six consecutive titles and establish herself as the very best player in the world.

Two years ago, Swiatek became a Grand Slam champion for the first time in the strangest of circumstances. There were no fans in attendance and in the midst of the pandemic, no dramatic celebrations as she defeated Sofia Kenin to win on clay in the French capital.

This time around, she became a two-time French Open champion and got the acclaim from a packed out crowd she deserved. It was 27 degrees in Paris and these Grand Slam finals turn up the pressure to the max, but only one youngster kept their cool.

Gauff, just 18, has never played such a big occasion before. Swiatek has, and you could immediately tell the difference in experience levels. The American became the youngest finalist at the French Open since Kim Clijsters in 2007, and her run to this final has been immense, as she didn’t drop a set along the way.

But with all the talk about Gauff’s tender age it's easy to forget that Swiatek is just 21. She won here in 2019, is now 35 matches unbeaten and as the world number one, was ready to take this final by storm from the first serve.

The talented Pole raced into an early lead, breaking the nervous teenager in the first game of the match before holding her own serve. Often relying on that double backhand, Swiatek was a picture of concentration as she controlled the pace of the final, making the American battle for every point on her own service game. .

Gauff managed to save four break points on her next service game, but the unrelenting pressure of the 2020 champion told as she broke for a second time. Soon it was 4-0, as the Pole made holding her serve look easy, but Gauff finally got off the mark with a hold.

The crowd were right behind her, keen to not see a walkover, but that shaky start cost her the first set as Swiatek broke again to secure the first set 6-1 in just 33 minutes. Total control and domination from the woman that has been unbeatable in recent months. 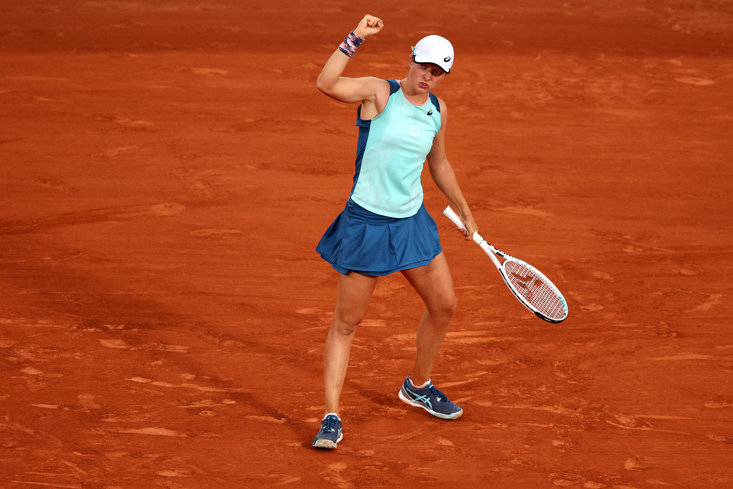 A toilet break and a change of racquet for the second set allowed Gauff to refocus. For the first time in the match she was hitting the chalk and pushing her opponent around the court, which led to her breaking Swiatek to kickstart the second set, before holding her own serve to take a 2-0 lead.

She may have lost her first set of the entire competition, but finally we were seeing the best of this precocious teenager. Yet, ten minutes later, Swiatek was back in front in the set. Her consistency, combined with double faults and mistakes on Gauff’s serve, allowed the world number one to find her groove again and she swiftly took a 3-2 lead.

You could visibly see Gauff’s early promise evaporate as she struggled to find her focus and continued to make unforced errors. Swiatek’s relentless energy saw her break again before she held her serve to make it 5-2. One game away from her second French Open title.

Gauff held her serve, but there was no stopping the inevitable. Swiatek held her nerve to win the French Open for the second time in three years, and this time, the crowd were there to enjoy her celebrations.

The best female tennis player in the world right now, is now a two-time Grand Slam winner. Coco Gauff will have her day in the sun and her tears broke the hearts of every onlooker, but Swiatek is simply untouchable in this form.