Bernardo Silva once almost quit football due to his lack of height. But defending champions Portugal now need the Manchester City playmaker to be a giant of Euro 2020 if they are to survive in the tournament’s ‘Group of Death’.

The 26-year-old playmaker has enjoyed one of the best seasons of his four trophy-laden years under Pep Guardiola at the Etihad Stadium.

Despite this season’s devastating loss in the Champions League final to Chelsea, Bernardo took his Premier League title medal haul to three, and League Cup tally to four on top of their 2019 FA Cup win.

The man signed in 2017 for £45 million from Monaco is reportedly a target for other Champions League sides in Italy, Spain and France this summer with rumours of a re-build in east Manchester. But first Silva will be one of Portugal’s key players alongside Cristiano Ronaldo, Bruno Fernandes and City team-mate Ruben Dias as they compete with Germany, France and home side Hungary in Group F.

Former Benfica youth player Bernardo agonisingly missed out on the glorious Euro 2016 success in France due to injury but the medals have been piling up ever since. And he was named Most Valuable Player – something that appeared to irk team-mate Ronaldo - as Portugal went on to win the Nations League in 2019.

Bernardo started his school life at a private prep school in Lisbon and was on Benfica’s radar by the age of seven. Soon, he was asking for a ride every day in order to not miss the youth team sessions 20 miles from Lisbon.

He said: “The first goal I remember scoring was at Queen Elizabeth School, the college I attended from the age of three until I was 10.”

He worked on his skills in the back yard at his grandparents’ house facing the Atlantic, at the beach resort of Sesimbra, scoring goals and dribbling past imaginary opponents.

As he moved up the age groups, a possible problem raised its head. Bernardo explains: “It was because I was seen as too short that I lost influence in under-13 teams I played for. I thought about dropping football, to give it all up. But with the years, I’ve learned to develop things to compensate for not being that tall.

“I have to think quicker, and guess where the ball is going to appear one second before all the others do. But between 14 and 17 years old, I played only a few matches and it got into my mind that I’ve fallen into pieces.

“ However, I had a good mentor. When you have a former Portugal and Benfica player like Fernando Chalana whispering to you, telling you every day ‘Don’t give up, you’re going to be one of history’s top players, have a little more of self-belief,’ then that gives you motivation to work even harder.” 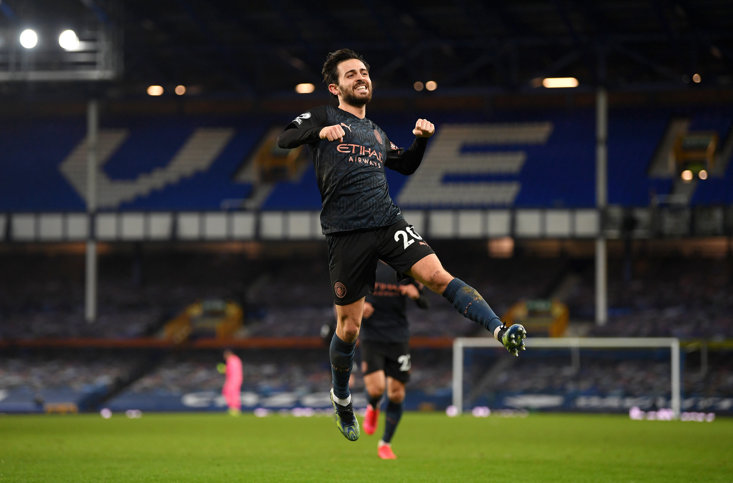 BERNARDO SILVA IS NOW A KEY PLAYER FOR CLUB AND COUNTRY

One of Bernardo’s heroes, Lionel Messi, always hoped to persuade the star to come to Barcelona - and once famously described Manchester City as “Bernardo plus 10”.

But whatever Messi’s views, two more of those City 10 – double English Player of the Year winner Ruben Dias, and Joao Cancelo – are also in Portugal’s powerful squad as they face up to a group containing current world champions France and three-time European Championship winners Germany.

It was at Monaco, who paid £14 million to Benfica for Bernardo and were managed by his compatriot Leonardo Jardim, that Bernardo really started to blossom. And the spell earned the player an unlikely new nickname. “They called me ‘Chewing gum’, saying I must have some on my boot in order to glue the ball to my foot.”

After his disappointment at missing out on the Euro 2016 triumph with the national side, Monaco won Ligue 1 in 2016-17, with Bernardo taking a leading role alongside France’s emerging star Kylian Mbappé, Colombia striker Radamel Falcao and Joao Moutinho.

Jardim insisted at that time: “Messi, Eusebio, Cristiano Ronaldo, Maradona and Pelé are players that will remain in football’s history, and I believe Bernardo can get close to that level one day.”

It was after that season that Argentine superstar Messi made his biggest pitch to Barcelona to get Silva signed up, but Manchester City and Guardiola swooped and the Catalan club didn’t make it in time.

Guardiola, though, has always known exactly what his highly-skilled and intelligent player brings to his team and the side’s offensive capability.

“Bernardo is smarter than all the others because usually, when you go one-on-one facing a balanced opponent, you’ll lose 10 out of 10," Pep has said. "But he is so clever that he always just goes for it and times it when his opponent is unbalanced.”

Check out our other Group F previews here: France, Germany and Hungary.